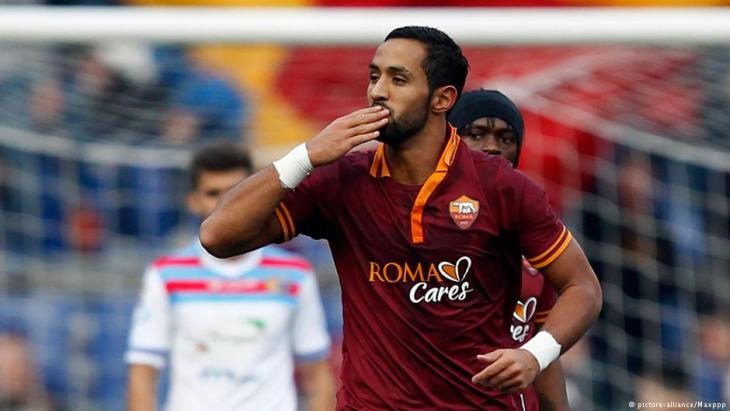 Moroccoʹs football star Mehdi Benatia
No defence against an own goal

Morocco made it to the final round of the World Cup for the first time in 20 years. A key figure in this success was centre back Mehdi Benatia, who ensured the squad qualified without conceding a single goal. No one could have reckoned with the crunch that was to follow. By Bachir Amroune

Abidjan on 11 November 2017. For the Moroccans, a draw will suffice to qualify for the World Cup in Russia. As for the Ivorians, they forced a draw themselves in Morocco and are hoping to secure their fourth consecutive World Cup qualification.

But things don't turn out as expected for the hosts and favourites: in a surprise move, top French coach Herve Renard has the Moroccans play more offensively. The first goal comes in the 25th minute, scored by defender Nabil Dirar and just five minutes later, Benatia makes it 2-0. It's the second goal in 45 selection matches for the centre back, regarded as one of the best Africans playing in this position at present.

For the remaining 60 minutes, Benatia lives up to his reputation as defence supremo. The Ivory Coast players try everything; pushing their ball possession up to almost 60 percent. But they just can't get past the rock solid wall of defence built up by the Moroccan team captain.

When the final whistle is blown after 93 minutes, an entire nation erupts in jubilation. Even King Mohamed VI. expresses his joy at the national squad's heroic effort. With tears in his eyes, the 31-year-old Benatia tells French media it's the best moment of his career.

But Benatia's soccer career wasn't always so glorious. Born in the Parisian banlieues to a Moroccan father and an Algerian mother, he learned the tools of his trade at the age of 13 at the elite French soccer academy Institut National du Football Clairefontaine. His promising talent soon came to the attention of Manchester United and Chelsea.

But the young Mehdi had other plans and wanted to establish his soccer career in a calmer, more solid fashion. When he was 15 he joined Olympique Marseille, where he signed his first professional contract three years later. 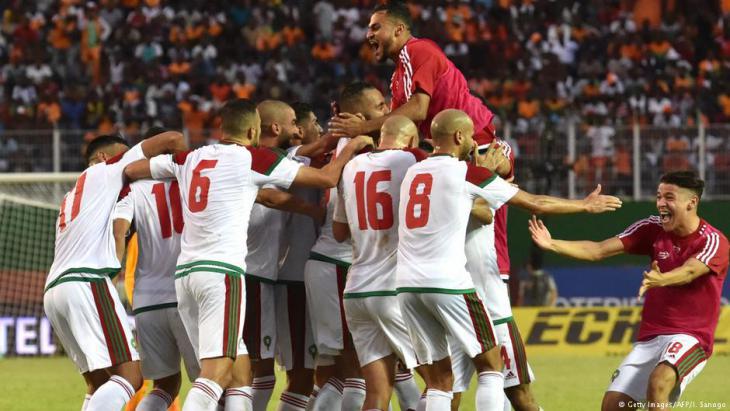 Moroccan players celebrate qualifying for the 2018 World Cup: when the final whistle was blown after 93 minutes, an entire nation erupted in jubilation. Even King Mohamed VI. expressed his joy at the national squad's heroic effort. With tears in his eyes, the 31-year-old Benatia told French media it was the best moment of his career

For a long time, this remained the high point of his fledgling career. This is because Marseille coach Jose Anigo left Benatia on the bench. After a drought of four seasons, during which he was loaned to various French clubs, he ended up playing for the second-division club Clermont Foot at the age of 22. Not exactly something ambitious young soccer professionals dream of.

But in hindsight, this turned out to be the best thing for his career development: sustained match experience meant people started noticing Mehdi Benatia again. Two years later, in the summer of 2010, he transferred to the Italian club Udinese Calcio. The 1.90m giant immediately felt at home here and established himself as a regular player.

In the land of the catenaccio, his qualities as tough defender came into their own. He shot to fame and found himself fielding interest from several English and Italian clubs. In the summer of 2013, he finally transferred to AS Roma for 13.5 million Euros.

In the Italian capital, Benatia became the best central defender in Italy and one of the best in Europe. He is technically strong, excellent at anticipating the game and also dangerous near the goal. Alongside Francesco Totti during the 2013-14 season, he netted five goals and helped Roma finish as Italian runners-up.

Bleak years with the Bavarians

It was time for the Bavarians to make their play for Benatia. Instead of consolidating his success with Roma, Benatia followed the lure of big money to the Isar: the Munich club stacked up more than 28 million euros for him. But things went downhill again for Benatia in Munich. He struggled with the Bavarian mentality, was plagued with injuries and had a troubled relationship with the coach at the time, Guardiola.

He was barely involved in winning the club's two championship titles in 2015 and 2016, the first ever championship victories in his career. The Bavarians took the hit from their poor investment and allowed Benatia back into the Serie A in the summer of 2016. This time as a loan with an option to buy for Juventus Turin. 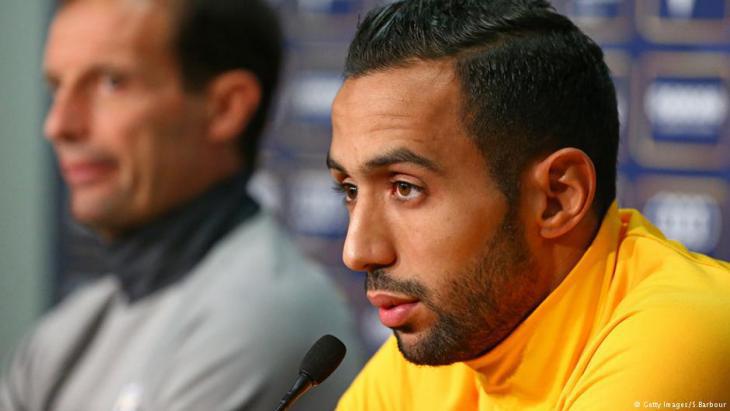 Racism scandal in the Italian football league: following a vicious slur last May, Juventus player Mehdi Benatia abruptly curtailed an interview with TV channel RAI 2. During a live broadcast, a man was heard in the background, insulting the footballer on loan from Bayern-Munchen as a "Moroccan shit". Benatia was heard to say, "I take that personally". Then he stopped the interview. The broadcasting company issued a formal apology for the "regrettable racist incident"

But things didn't go well in Turin either. During the first half of the season, injury meant he could only play in one third of the club's official fixtures. At the start of 2017, his future appeared uncertain. Following the disappointing loss against Egypt in the quarter finals of the African Cup of Nations in January, he even announced his resignation from the Moroccan national squad, which he has captained since 2015.

But just a few months later, luck smiled on him yet again: the Bianconeri made use of their option to buy and finally relieved him from the Bavarians for 17 million Euros. As the season drew to a close, he helped Juventus to clinch the double and was signed until 2020.

A stroke of good fortune for Morocco

During the new season, Benatia capitalised on the transfer of his team rival Leonardo Bonucci to AC Milan and became a regular with the Old Lady. The Atlas Lions are also profiting from his superior form: as well as their successful World Cup qualification, the team have remained unbeaten after one year and 18 matches. He made amends for his failure with Juventus in the Champions' League quarter final against Real Madrid with a new double. In an outstanding performance during the Italian Cup final, he contributed no fewer than two goals to the 4:0 victory against AC Milan.

Things got serious for the Moroccans on Friday in St. Petersburg, where they competed against Iran in their first World Cup match for 20 years. Had they wanted to sustain their chances of qualifying for the second round, a win would have been obligatory. After all, the two other members of the group are Portugal and Spain.

Unfortunately, Morocco lost to Iran 1:0, with substitute Aziz Bouhaddouz scoring a disastrous own goal during injury time. The dream of making it into the final 16, something which the North African nation last managed in 1986, a year before Benatia was born, was not to be.

The book "The Invention of the Maghreb: between Africa and the Middle East" prompts us to review basic terminology. This includes terms that we use almost every day as if they are ... END_OF_DOCUMENT_TOKEN_TO_BE_REPLACED

Morocco has taken the 2022 World Cup by storm, with the northwest Africans reaching the semi-finals for the first time in their soccer history. As the knockout match approaches, ... END_OF_DOCUMENT_TOKEN_TO_BE_REPLACED

Nouara may be 65, but she is ready to join thousands of others who burn their ID and pay traffickers for the chance of a new life in Europe. Zineb Bettayeb reports END_OF_DOCUMENT_TOKEN_TO_BE_REPLACED

When is it and when is it not acceptable to display a political banner at the World Cup in Qatar? The answer seems to depend largely on the political message, with fans ... END_OF_DOCUMENT_TOKEN_TO_BE_REPLACED

In Doha, Arabs from Morocco, Tunisia, Egypt and Algeria are gathering to celebrate the first ever FIFA World Cup to be held on Arab soil. The criticism from Europe? Over the top, ... END_OF_DOCUMENT_TOKEN_TO_BE_REPLACED

November 2022 sees the Arab world firmly in the spotlight with the COP27 in Egypt and the FIFA World Cup in Qatar. Public trust in MENA governments is weak, thanks to their ... END_OF_DOCUMENT_TOKEN_TO_BE_REPLACED
Author:
Bachir Amroune
Date:
Mail:
Send via mail

END_OF_DOCUMENT_TOKEN_TO_BE_REPLACED
Social media
and networks
Subscribe to our
newsletter