Zefzafi and his co-defendants insist that Hirakʹs demands are social and economic, claiming that they are being wrongly charged with high-level political offences that could result in life prison sentences if they are found guilty. "They are trying us on charges of secession, but they have been prosecuting us for saying our opinion," said Zefzafi at a court of appeals hearing on 23 February, from which he was later expelled for his remarks.

Defence lawyers representing Zefzafi and other activists have previously protested the allegations made by the public prosecution and claim that the false accusations preclude a fair trial. Zefzafi has also claimed that the director of the Oukacha prison stole his court notes, which he intended to use in a recent hearing.

Meanwhile, Zefzafi and others say their health is in slow decline. The detainees face up to 22 hours of solitary confinement per day and are denied proper nutrition, according to reports, among other conditions that observers speculate are attempts to exhaust the group and weaken their defences. 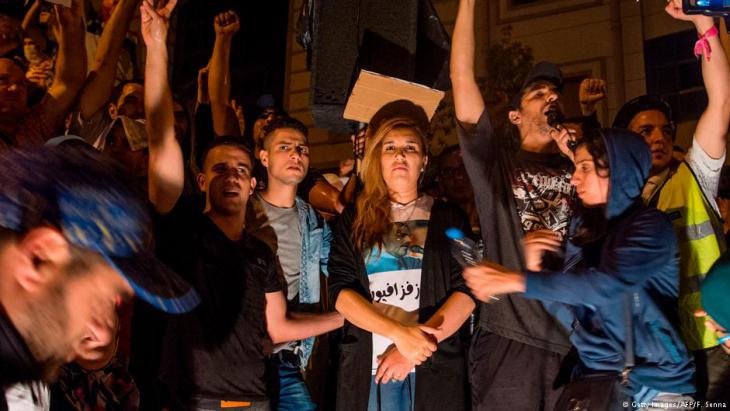 Sentenced for inciting protests: activist Nawal Benaissa, a leading voice of Hirak, was sentenced to 10 months in prison on 15 February 2018. Benaissa responded to the courtʹs decision by expressing her continued support for the Rif protests on Facebook. "I am proud to take part in the protests in the region and I denounce the imprisonment of Hirak activists. I demand their immediate release," she wrote

According to Mohamed Chtatou, a political analyst, the whole trial has been a mistake from the outset. "It casts the government and the country in a bad light internationally. Moreover it has also been denounced by the major human rights organisations. The whole process is proving lengthy and unfair; but then, it is a well-known fact that Moroccan justice is not independent."

Human rights organisations have denounced the criminal charges made against Hirak protesters and the ongoing government crackdown against the movementʹs supporters.

Amnesty International has labelled the accusations made against Zefzafi and others as incompatible with Moroccoʹs human rights obligations. The organisation says that the charges "criminalise the peaceful exercise of the rights to freedom of assembly, association and expression" in the country. Amnestyʹs annual country report released on 22 February cites mass arrests, excessive force and coercion, in addition to allegations of abuse and torture, as being among the violations committed by Moroccan authorities.

"For us, this indicates a worsening of the situation in Morocco following the period of transitional justice," said Mohamed Sektaoui, the Director General of Amnesty International in Morocco, to Huffington Post Maghreb in reference to the countryʹs 2011 constitutional reforms.

Both Amnesty International and Human Rights Watch have called for the unconditional release of Zefzafi and Hirak protesters along with the journalist Hamid El Mahdaoui, who is charged with "breach of his obligation to report to the authorities an attempt to undermine the internal security of the State."


El Mahdaoui, a well-known journalist and government critic, is among seven media figures to be arrested and charged for reporting on Hirak. Moroccan authorities have also prevented members of the press from entering Hoceima, including several foreign journalists who were subsequently expelled from the country.

The government has announced it will be pushing through a development project in Hoceima aimed at tackling some of Hirakʹs grievances. Leading members in the government have also called statements accusing the Rif protesters of separatism a mistake. But the government has yet to suggest that it will consider appeals demanding the release of detained Hirak protesters.

"This trial is marginalising the Rif further and further and sending the wrong signals to the citizens of Moroccoʹs periphery," concludes Chtatou.

Having seen a sharp decline in its influence in Tunisia and Algeria, France is eyeing China and Spain’s growing economic presence in Morocco with concern. Is Paris about to lose ... END_OF_DOCUMENT_TOKEN_TO_BE_REPLACED

Insults directed against Egyptian President Abdul Fattah al-Sisi have been particularly prominent among the hundreds of chants by Arab protestors in Algeria, Sudan, Iraq and ... END_OF_DOCUMENT_TOKEN_TO_BE_REPLACED

At the gates of the lively city in Morocco, there is a place of tranquillity: "ANIMA - Return to Paradise". Volker Witting visited the imaginative garden world created by Austrian ... END_OF_DOCUMENT_TOKEN_TO_BE_REPLACED

Equality in divorce, a ban on polygamy: reformers of Islamic family law have a clear agenda. They are exploiting the ambiguity of traditional jurisprudence. By Joseph Croitoru END_OF_DOCUMENT_TOKEN_TO_BE_REPLACED

Hassan Aourid is one of the most important political and intellectual figures in Morocco. In interview with Ismail Azzam for Qantara, Aourid outlines his vision of the decline of ... END_OF_DOCUMENT_TOKEN_TO_BE_REPLACED

Morocco's rule of law, human rights and freedom of the press are under attack. According to political scientist Mohamed Taifouri, although the 2011 constitution includes a large ... END_OF_DOCUMENT_TOKEN_TO_BE_REPLACED
Author:
Matthew Greene
Date:
Mail:
Send via mail

END_OF_DOCUMENT_TOKEN_TO_BE_REPLACED
Social media
and networks
Subscribe to our
newsletter