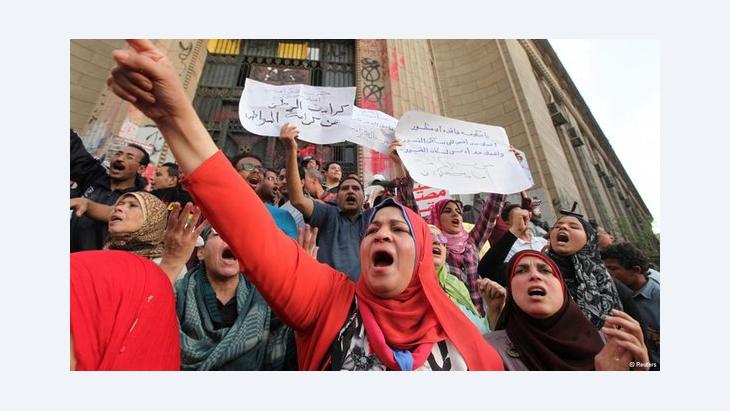 Attacks on Egypt's Opposition on the Rise

Rights groups say attacks on opposition activists and critical media in Egypt are on the rise. In parliament, the Islamist regime is quickly trying to pass legislation that will further limit citizens' freedom of speech. Matthias Sailer reports from Cairo

It is dangerous to speak out openly against the Egyptian leadership. A wrong word against President Morsi or the Islamists backing him can be enough to end up on trial with charges of insulting the President or Islam.

Since Morsi took office, there have been some 600 complaints filed against people working in the media, according to the Egyptian Organization for Human Rights (EOHR). The Muslim Brotherhood and the president frequently accuse media figures of instigating unrest in the population.

"If the state tells you every day that the media is calling for violence and hatred, then you can assume that the 52 percent who have voted for Morsi do believe it," says Nihad Aboud of the Association for Freedom of Thought and Expression, a group that works in support of press freedom in Egypt. That's why it's often supporters of the new regime who file complaints, for example, against a television show's guests or the host himself when the tone turns critical of Morsi. 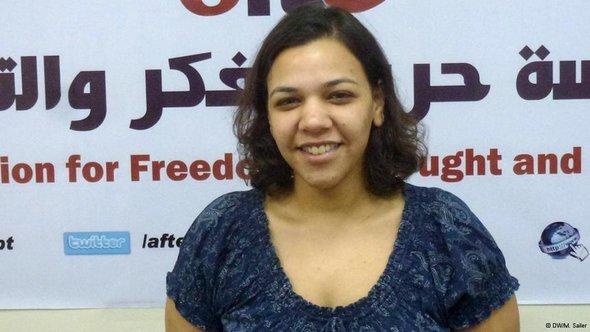 "If the state tells you every day that the media is calling for violence and hatred, then you can assume that the 52 percent who have voted for Morsi do believe it," says Nihad Aboud of the Association for Freedom of Thought and Expression, a group that works in support of press freedom in Egypt

​​With the level of violence between protesters and the police steadily on the rise, the risks for journalists have also increased. Stirred up by media reports, it is occasionally even ordinary Egyptians who attack critical journalists or hand them over to the police. "During the past month, there have been many violent attacks. We've had more than 20 cases of abuse and beatings. Some got shot at, others where temporarily locked up," says Nihad Aboud.

Added to this is the increasing violence against the activists. Again and again there have been abductions and brutal attacks in past weeks. One victim is Mohamed el-Gindi who runs a Facebook page critical of the regime. El-Gindi suddenly disappeared and only after days of searching was found in a hospital in a coma, says Tareq Zaghloul Asran of EOHR, adding, "He got kidnapped and two days later the police said he got hit by a car. A short while later he was pronounced dead."

There are indications that the authorities have tried to cover up the case in order to prevent any unrest. Also, there were witness accounts putting the blame on the Muslim Brotherhood: according to magazine "Newsweek", a former supporter of the Brotherhood claimed to have seen el-Gindi before his death in a police station outside of Cairo. In that station, according to the witness, members of the Brotherhood were beating and interrogating so-called criminals. 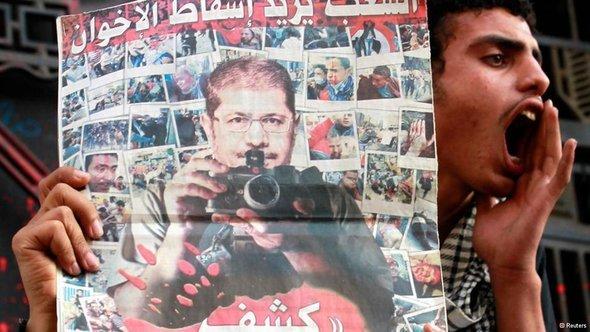 New level of violence: Stirred up by media reports, it is occasionally even ordinary Egyptians who attack critical journalists or hand them over to the police. Pictured: a man holds up a poster that reads "The people want the downfall of the Muslim Brotherhood"

​​The threat of violence is not new to regime critics. On December 5, 2012, supporters of the Muslim Brotherhood went after anti-Morsi protesters outside the presidential palace, says Tareq Zaghloul Asran. "That's how the story started: The young supporters of the Brotherhood have placed many of the protesters under arrest. They brought them behind the walls of the palace and tortured them."

There've been attacks in other places as well, says Asran. As an example he mentions an attack on the president of EOHR when he wanted to leave a TV studio in a media complex where certain shows critical of the Egyptian government were produced. Again and again, Islamists block the entrance to the studios.

For Tareq Zaghloul Asran, the current rise in violence and court cases against activists and journalists is no coincidence. The laws of the provisional parliament, which is dominated by the Islamists, are equally repressive. "What's happening in Cairo these days is systematic. The government is in a hurry. In parliament, they are rushing to pass a new law on demonstrations, which is aimed at keeping the opposition off the streets," says Asran.

The new bill will make it more difficult to get permission for demonstrations. Other laws planned are also aiming at regime critics. Tareq Zaghloul believes the government is trying to pass those laws before the election of a new parliament.

They’ve already got the Louvre; they’ll soon have a Guggenheim Museum as well – and now the Emirates have added literature to their quest for cultural supremacy in the Arab world ... END_OF_DOCUMENT_TOKEN_TO_BE_REPLACED

Years in the making, Sisi's elite New Administrative Capital will isolate most Egyptians from their centres of government in an effort to fortify the regime against any social ... END_OF_DOCUMENT_TOKEN_TO_BE_REPLACED

Professor Timothy Brennan's "Places of Mind: A Life of Edward Said" is a detailed biography of one of the most important intellectuals of the twentieth century, taking us on a ... END_OF_DOCUMENT_TOKEN_TO_BE_REPLACED

China has long portrayed itself as a strong supporter of the Palestinian cause. It has also claimed that in sharp contrast to the stance of the USA, its position is based on ... END_OF_DOCUMENT_TOKEN_TO_BE_REPLACED

Recep Tayyip Erdogan, disappointed by the European Union’s reluctance to integrate Turkey into its ranks, has re-directed his country’s diplomacy toward the Maghreb and Africa to ... END_OF_DOCUMENT_TOKEN_TO_BE_REPLACED

END_OF_DOCUMENT_TOKEN_TO_BE_REPLACED
Social media
and networks
Subscribe to our
newsletter