The Rossotrudnichestvo actively promotes study in Russia for foreign students and is awarding more and more scholarships to Arab students. Young Arabs' interest in Russian culture is rising accordingly. One of the reasons why Moscow is currently so active in fostering this interest is because many of the Russian-speaking Arabs who studied in Russia in Soviet times and later went on to hold influential posts back home have retired by now – although they still remain an important pillar and are often mobilised as "ambassadors" of Russian culture and state interests in the Arab world. They pass on their knowledge and contacts to the younger generation not only in the context of the relevant alumni associations but also in books that cast Russian–Arab relations in a sympathetic light.

In these books and in exhibitions too – most of which gloss over the Communist era – the attempt is made to construe long-standing cultural ties between Russians and Arabs that go back several centuries. In the case of Palestine, there is even talk of Russia's age-old connections with the Holy Land that stretch back thousands of years. 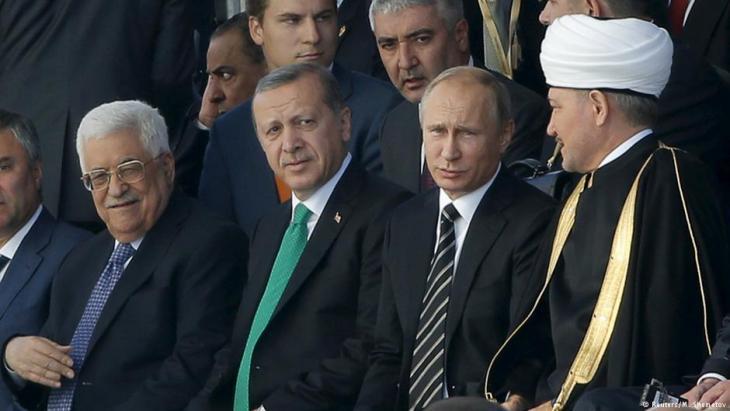 "The Palestinian Authority is easy terrain for Moscow's cultural officials, because they have a particularly prominent friend there: Palestinian President Mahmoud Abbas, who was already part of the PLO leadership back when it was supported by the Soviet Union," writes Joseph Croitoru. Pictured here: Mahmoud Abbas, Recep Tayyip Erdogan and Vladimir Putin at the opening of the Moscow Jum'ah (Cathedral) Mosque in 2015

The Palestinian Authority is easy terrain for Moscow's cultural officials because they have a particularly prominent friend there: Palestinian President Mahmoud Abbas, who was already part of the PLO leadership back when it was supported by the Soviet Union. Abbas studied history in Moscow and wrote a dissertation there in the 1980s in the spirit of the Soviet government-mandated anti-fascism, discussing "secret relations" between the Nazis and the Zionists.

President Putin paid a visit to Abbas in Ramallah in 2005, and in 2010, Russia acquired a large plot of land in Jericho from the old holdings of the Russian Orthodox Church and built on it a Russian history museum with lavish gardens. It is located on a street named after the then Russian President Dmitri Medvedev. Medvedev visited Jericho in 2011 to officially open the museum.

During Putin's visit to the Palestinian territories in 2012, it was said that the aim of the museum was also to strengthen the Russian presence in the Holy Land. Each of the two sections of the exhibition there suggests in its own way that this relationship goes back a very long time,

On display, for example, are historical photos from the 19th and early 20th centuries of Russian pilgrims to Jerusalem who had their pictures taken at the Temple Mount. Also presented are archaeological finds from the museum grounds that can be traced back to a Byzantine church that once stood there. In line with the Neo-Byzantinism propagated by the Russian government, these exhibits conjure up relations reaching back thousands of years between the Russians – the historical heirs to the Byzantine Empire – and the Holy Land. The museum has long been a mandatory stop for Russian "Bible travellers".

"The people aren’t ready for democracy" has been the constitutional basis for Arab tyranny, its favourite slogan and its sacred narrative for more than a century. Yet, asks Khaled ... END_OF_DOCUMENT_TOKEN_TO_BE_REPLACED

A new global database shows a significant gap in reported COVID-related deaths, suggesting the actual worldwide death toll is short by at least 1 million. That's due in part to ... END_OF_DOCUMENT_TOKEN_TO_BE_REPLACED

Two decades after the attacks of 11 September 2001, the West faces the shattered debris of its failure – not only in Afghanistan, but also in Iraq, Syria, Libya and Yemen. What ... END_OF_DOCUMENT_TOKEN_TO_BE_REPLACED

The coronavirus pandemic has turned lives upside down all over the world. In the Middle Ages, however, people lived with epidemics all the time. The best and most famous ... END_OF_DOCUMENT_TOKEN_TO_BE_REPLACED

In Ancient Egypt, the pharaohs had "solar boats" built to take them into the afterlife. One of these boats was discovered in 1954. It has now been moved to the Grand Egyptian ... END_OF_DOCUMENT_TOKEN_TO_BE_REPLACED

Attracting little attention from the world at large, Egypt's military regime has been mercilessly going after dissidents. Now, the first executions of prominent members of the ... END_OF_DOCUMENT_TOKEN_TO_BE_REPLACED

END_OF_DOCUMENT_TOKEN_TO_BE_REPLACED
Social media
and networks
Subscribe to our
newsletter