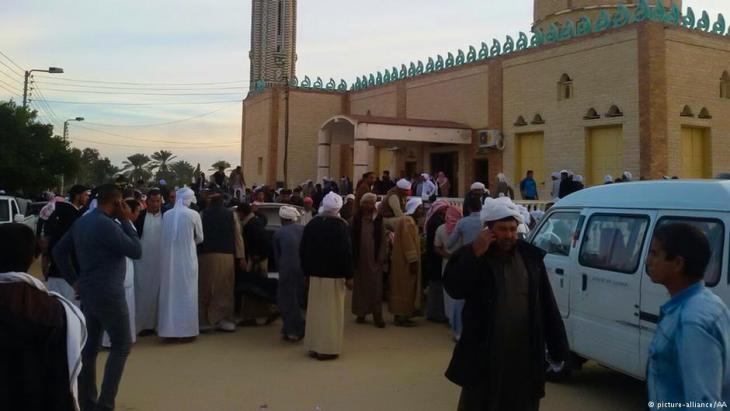 Openly critical of the culture of violence, the Sufis in northern Sinai have long been a thorn in the side of IS jihadists in the region. This begs the question as to why the Egyptian security forces did not take seriously the threats that were made against the Sufis and the mosque targeted in the recent attack. By Karim El-Gawhary

More horrific details about last Friday's attack on the mosque in the village of Rawda in northern Sinai have been released by the Egyptian media. According to the official death toll, 305 people were killed in the attack, including 27 children.

It is now apparent that the inhabitants of the village had of late been openly threatened and put under huge pressure by militant Islamists. Despite this, the Egyptian security forces did nothing. This meant that the terrorists had all the time in the world to carry out their attack.

Citing villagers and eye witnesses, whose accounts tallied with each other, the Egyptian online news portal Mada Masr reports that the terrorists were able to go about their bloody business unhindered for three-quarters of an hour. The attack began when three armed terrorists entered the mosque while the imam was preaching and opened fire, indiscriminately spraying the room with bullets. The mosque has a capacity of 500. A very small number of those who were in the mosque at the time were able to escape through the windows before the building was completely surrounded by up to two dozen armed jihadists. Those who survived inside did so by hiding under corpses.

The attackers even had enough time to search the surrounding houses and shoot dead any men they found inside.

The village graveyard was too small

Before they eventually retreated, the jihadists set fire to the cars in the village so that the injured could not be taken away. The first people to reach the scene by car were residents of the nearest village, who began to remove the injured. Later, a small number of ambulances arrived, each of which was able to take up to five people. The only hospital in the vicinity was completely overwhelmed. It is reported that a further 17 people died there. After that, relatives took the injured to hospitals further away at the Suez Canal.

Initially, the villagers wrapped the hundreds that had been massacred in shrouds and brought them to the mosque. The village graveyard was simply too small to hold all the victims, so a mass grave was dug in the neighbouring village of Mazar. 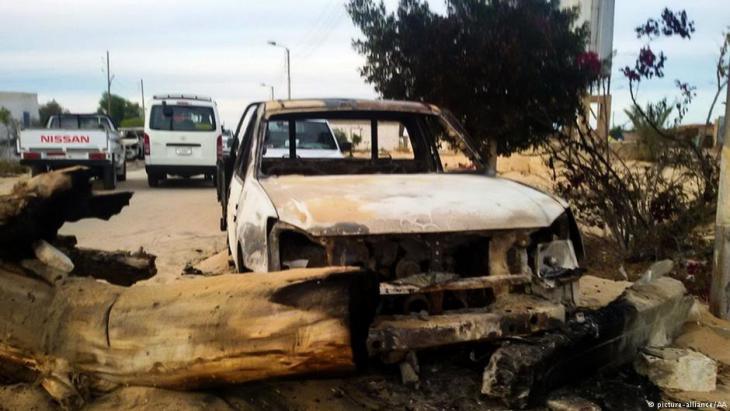 Act of barbarism: before they eventually retreated, the jihadists set fire to the cars in the village so that the injured could not be taken away. The first people to reach the scene by car were residents of the nearest village, who began to remove the injured. Later, a small number of ambulances arrived, each of which was able to take up to five people, reports Karim El-Gawhary

It is now known that before the attack, militant Islamists handed out flyers in the village and called on villagers not to co-operate with the security forces and to cease practising all forms of Sufism and related rituals.

One of the local clan leaders was also visited by the militants and warned not to permit any kind of Sufi gatherings from that point on. The mosque in the village was a well-known centre of an Islamic Sufi order that is widespread in northern Sinai (Sufis adhere to a more spiritual and peaceful interpretation of Islam, which is why they have long been such a thorn in the side of militant Islamists).

In recent years, militant Islamists had repeatedly destroyed the shrines in northern Sinai held sacred by the Sufis. Last year, IS abducted the well-known Sufi sheikh Suleiman Abu Heraz, who was over 90 years of age at the time. They subsequently posted footage of his beheading on the Internet.

Fanning the flames of sectarian division

Until now, most of the militant Islamists' victims in northern Sinai have been either members of the security forces or Christians. Ahmad Zaghloul, an Egyptian expert on jihadism, told Qantara.de why IS has opened a new front against the Sufis. "IS thrives on fanning the flames of sectarian division, as it has done between Shias and Sunnis in Iraq, Syria and the Gulf. But there are no Shia Muslims here in Egypt. This is why they are trying to drive a wedge between Christians and Muslims there and now to create a gulf between Sunnis and Sufis," he explains. 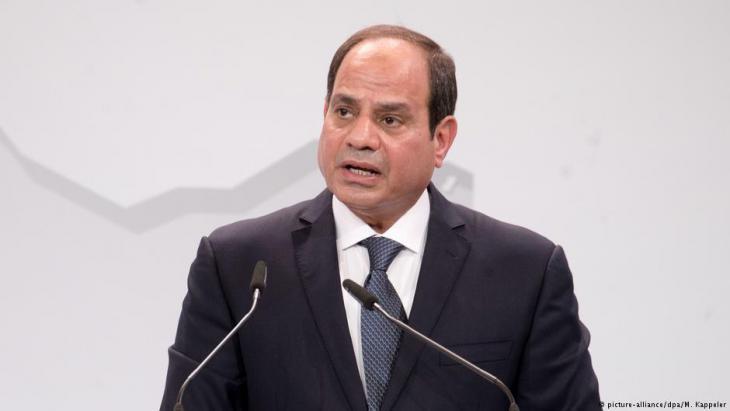 Egypt′s policy of bombing terrorists: "the security campaign in Sinai, since its very early beginnings, has been marred by severe human rights violations against innocent civilians," comments journalist and author Mohannad Sabri in interview with the Carnegie Middle East Center. It is an opinion shared by numerous analysts and observers of Egyptian domestic affairs

"There are fundamental differences of theological opinion, above all regarding the cult of saints and the culture of Sufi holy shrines. All fundamentalist interpretations of Islam are critical of these aspects. However, the jihadists are the only ones to have ever perpetrated violent attacks on Sufis in Sinai and this has to do with the political and social situation in Sinai," explains Zaghloul.

The Sufis have long been a source of irritation for the jihadists in northern Sinai. "The Sufis in Sinai speak out against the culture of violence. Their sheikhs sit down with young people and try to persuade them to abandon jihadi attitudes. This explains why the jihadists had problems gaining supporters in some areas. IS responded to the Sufi's open criticism of violence by publishing written threats."

This raises the question as to why the Egyptian security forces – despite their massive presence in northern Sinai – did not take these threats seriously, especially those directed at the mosque targeted in this attack. The villagers were abandoned entirely to their fate. Weeks ago, they used a tree to block a road in the hope of stopping any car bombers in their tracks. Sadly, the tree could not prevent last Friday's mosque massacre.

Home
Print
Newsletter
More on this topic
Egypt's 'anti-terror' campaign: Not all it seemsEgyptian Copts flee the Sinai: "They're slaughtering us like chickens"Islam in the Middle East: The curse of religiosity
Related Topics
'Islamic State' | IS, Abdul Fattah al-Sisi, Egypt's army, International terrorism, Jihadism | Jihadists, Mysticism | Sufism
All Topics

Arab women played a leading role in the protest movement of 2011. Since then, ongoing social transformation has had a considerable impact on their lives. What is their assessment ... END_OF_DOCUMENT_TOKEN_TO_BE_REPLACED

They’ve already got the Louvre; they’ll soon have a Guggenheim Museum as well – and now the Emirates have added literature to their quest for cultural supremacy in the Arab world ... END_OF_DOCUMENT_TOKEN_TO_BE_REPLACED

Years in the making, Sisi's elite New Administrative Capital will isolate most Egyptians from their centres of government in an effort to fortify the regime against any social ... END_OF_DOCUMENT_TOKEN_TO_BE_REPLACED

Professor Timothy Brennan's "Places of Mind: A Life of Edward Said" is a detailed biography of one of the most important intellectuals of the twentieth century, taking us on a ... END_OF_DOCUMENT_TOKEN_TO_BE_REPLACED

China has long portrayed itself as a strong supporter of the Palestinian cause. It has also claimed that in sharp contrast to the stance of the USA, its position is based on ... END_OF_DOCUMENT_TOKEN_TO_BE_REPLACED

Recep Tayyip Erdogan, disappointed by the European Union’s reluctance to integrate Turkey into its ranks, has re-directed his country’s diplomacy toward the Maghreb and Africa to ... END_OF_DOCUMENT_TOKEN_TO_BE_REPLACED
Author:
Karim El-Gawhary
Date:
Mail:
Send via mail

END_OF_DOCUMENT_TOKEN_TO_BE_REPLACED
Social media
and networks
Subscribe to our
newsletter