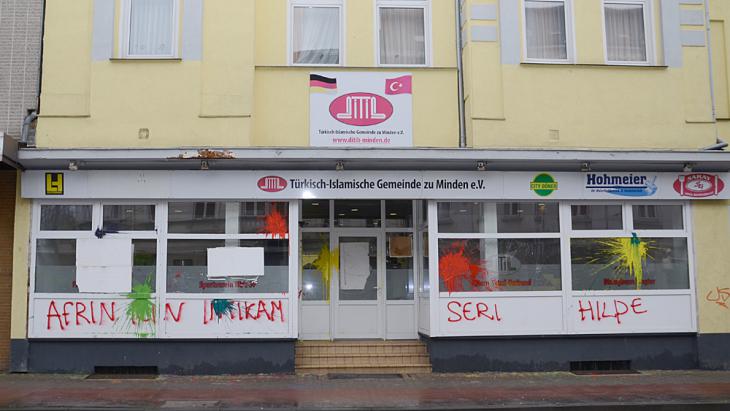 Since the beginning of the Turkish military offensive in the northern Syrian enclave of Afrin, there have been repeated violent attacks on Turkish mosques in Germany. Foreign conflicts should not be imported to Germany, nor should the military conflicts of other nations be fuelled by weapons exports, says Armin Langer

Since 20 January, which marked the beginning of the Turkish offensive against the Kurdish province of Afrin in Syria, several mosques belonging to the Turkish-Islamic Union for Religious Affairs (DITIB) and the Islamic Community Milli Gorus (IGMG) have come under attack in Germany: in Leipzig, mosque windows were smashed by unknown attackers; a house of prayer was also damaged in Minden; Kassel was the scene of a similar incident. In the city of Frankfurt, the entrance to the Eyup Sultan Mosque was daubed with the slogan "Revenge for Afrin".

The same slogan was sprayed in red on the walls of the Turkish community centre in the town of Stade in Lower Saxony. Reports of new mosque desecrations frequently make the news, most recently from Aachen, where an attack was carried out on an IGMG mosque during morning prayers on 1 February.

Attacks from left and right

In addition to these attacks, there have also been calls to boycott local Turkish shops: "I call on all decent citizens: boycott Turkish shops in Germany, because 70 percent of them support Erdogan," said Kay Gottschalk, Alternative for Germany (AfD) deputy leader and member of the Bundestag, during the party's New Year reception in Krefeld. He did withdraw his call, but only following vehement criticism.

And if that weren't enough: the attacks are not just coming from the right wing, but also from the left. An anonymous claim of responsibility for the attacks in Leipzig and Minden appeared on the left wing radical Internet platform "Indymedia". In it, the authors called on people to "attack institutions of the Turkish state and its henchmen in business and politics." There's only one problem with this: in the case of the DITIB and IGMG mosques, these are not simply Turkish state establishments, but first and foremost religious establishments.

It is true that the two associations that own the mosques in question are themselves problematic. Sermons are generally held not in German, but Turkish – also because the imams delegated from the Turkish national Directorate for Religious Affairs neither speak German, nor are they familiar with local circumstances. 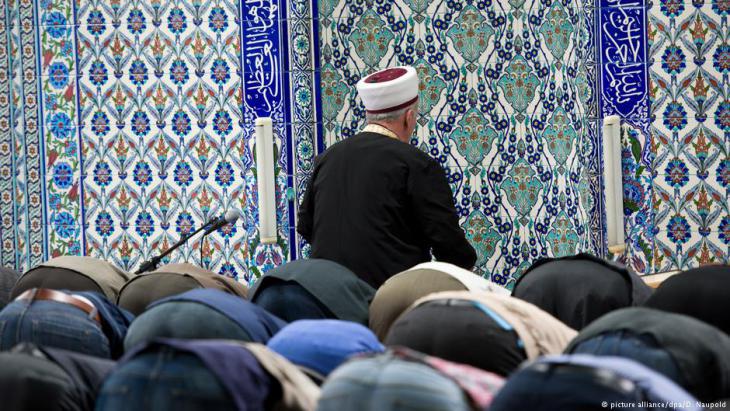 Tension growing between Germany′s Kurdish and Turkish populations: "Since the start of the Olive Branch offensive, prayers have been held in the mosques for the good health of Turkish soldiers, which is also evidence that many association functionaries and members perceive themselves primarily as supporters of the Erdogan government and its military operations and not as spiritual leaders of the Muslim community in Germany – a community that also includes many people of Kurdish and Turkish origin who are critical of Erdogan," writes Armin Langer

Since the start of the Olive Branch offensive, prayers have been held in the mosques for the good health of Turkish soldiers, which is also evidence that many association functionaries and members perceive themselves primarily as supporters of the Erdogan government and its military operations and not as spiritual leaders of the Muslim community in Germany – a community that also includes many people of Kurdish and Turkish origin who are critical of Erdogan.

With their nationalistic policies, not only are they alienating many potential visitors to the houses of prayer, they are also damaging the peaceful co-existence of migrant communities in Germany. Moreover, it is questionable whether these organisations in their present form are furthering the integration of Turkish-origin Muslims in the Federal Republic – or actually promoting their separateness by placing the emphasis on Turkish-national identity.

But these Turkish mosques are on German soil. And if necessary, they should be given police protection. Blanket attacks on religious establishments are taboo. In houses of worship, inner peace should find sanctuary and these places should enjoy particular respect. For this reason, any anti-military activism should take another form.

Those critical of the military offensive should be demonstrating in front of the Turkish embassy and consulate – or indeed calling the German authorities to account, because the government supplied tanks to Turkey and has thus far not condemned the intervention in northern Syria. 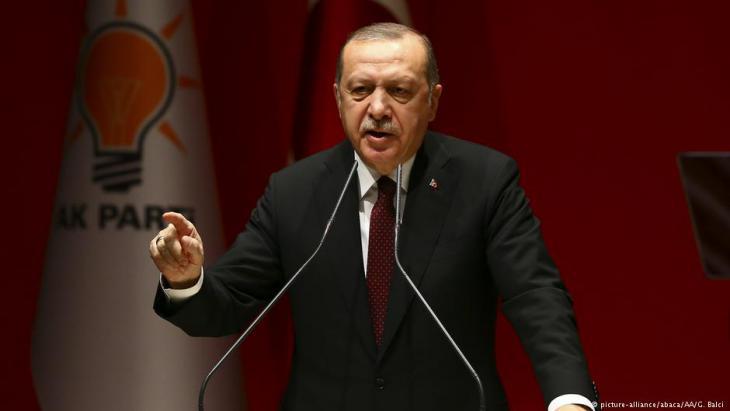 Angela Merkel has not yet commented on the current Turkish offensive. At a media conference, deputy government spokeswoman Ulrike Demmer explained only that the government is regarding reports on the Turkish offensive against Afrin "with great concern" and that it is calling for an end to the fighting. Demmer did not condemn the attack, referring instead to "legitimate Turkish security interests on the border to Syria."

Another good place to stage a rally would be outside the German Foreign Ministry. According to the British NGO "Campaign Against Arms Trade" (CAAT), Germany supplied weapons, tanks, warships and other armaments to Turkey between 2001 and 2012 to the tune of almost two billion euros. Of all European countries, it was Germany that exported the largest volume of military weapons to Turkey during this period. The tanks the Turkish army is now using to advance on Afrin are among the 354 combat tanks supplied since 2005.

And although the war on the Kurds in Turkey has been flaring up again since 2015, Germany supplied considerably more military weapons to Turkey in 2017 than in previous years. According to a report by German public broadcaster ZDF, weapons exports alone to December clocked up a total value of more than 59.5 million Euros, significantly more than the previous years' totals.

If Germany wishes to avoid foreign conflicts being imported onto its soil, it would be well-advised to avoid fuelling the military conflicts of other nations with weapons exports.

Armin Langer studied philosophy and Jewish theology in Budapest, Jerusalem and Potsdam. A freelance writer based in Berlin, he recently published "Ein Jude in Neukolln" (A Jew in Neukolln).

In Doha, Arabs from Morocco, Tunisia, Egypt and Algeria are gathering to celebrate the first ever FIFA World Cup to be held on Arab soil. The criticism from Europe? Over the top, ... END_OF_DOCUMENT_TOKEN_TO_BE_REPLACED

Canan Topcu came from Turkey to Germany as a child. In her essay, she describes how bothered she was by the racism she encountered in her country of origin when she travelled ... END_OF_DOCUMENT_TOKEN_TO_BE_REPLACED

All organisers use major sporting events like this year’s FIFA World Cup in Qatar primarily to advertise their country and promote a slick public image. This is not something we ... END_OF_DOCUMENT_TOKEN_TO_BE_REPLACED

A leading light of Israeli theatre, Ofir Henig has directed the Israel Festival and is the only female director to have been awarded the Israel Theatre Prize. These days, however ... END_OF_DOCUMENT_TOKEN_TO_BE_REPLACED

Antoine Leiris lost his wife in the Islamist terrorist attack on the Bataclan club in Paris. German director Kilian Riedhof has made a film of his book "You will not have my hate ... END_OF_DOCUMENT_TOKEN_TO_BE_REPLACED

Lamya Kaddor, MP for Germany’s Green Party, visited Qatar with a group of parliamentarians. In interview with Claudia Mende, she advocates a differentiated picture and urges that ... END_OF_DOCUMENT_TOKEN_TO_BE_REPLACED
Author:
Armin Langer
Date:
Mail:
Send via mail

END_OF_DOCUMENT_TOKEN_TO_BE_REPLACED
Social media
and networks
Subscribe to our
newsletter