Skip to main content
Mozart in the West Bank

Top-flight musicians from the Berlin Polyphonia Ensemble together with students from the Barenboim-Said Foundation presented a programme of classical music in Ramallah, East Jerusalem, and Jenin. Tania Krämer attended the performances 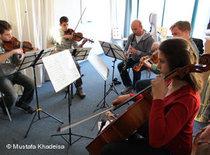 Learning from the pros: A total of nine musicians from the Deutsches Symphonie-Orchester Berlin provide lessons for the Palestinian music students

​​ Every now and then, a little squeak slips out, but the three young Palestinian clarinet players don't let it get to them. They start again and again until the sound is just right. It's part of the workshop atmosphere at the Barenboim-Said Foundation's music academy in the center of Ramallah.

Martin Koegel, oboist with the German chamber ensemble Polyphonia, is more than happy with his pupils. He is in Ramallah with other members of Polyphonia, a subgroup of the Deutsches Symphonie Orchester Berlin. Koegel and his fellow musicians were guests of the Palestinian music school in the West Bank in December 2010, where young musicians from the region received training side by side by experienced performers from Germany.

"We have young people here who began playing just a year ago and others that have five years experience," Koegel said. "With the more experienced players, we work on pieces together in small ensembles that we'll present in concert. And with the beginners, we are laying a foundation to help them play together and learn what's important in the process."

Inside the academy, music from all sorts of instruments is streaming into the halls from every direction – even the offices are full of young musicians hard at work. 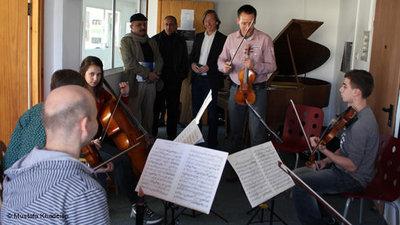 The members of the Polyphonia Ensemble Berlin are experts in communicating and conveying instrumental and interpretative skills to music students. The workshops are organized and realized in cooperation with local music conservatories as well as Germany's Goethe Institute

​​ 11-year-old Yara Khawaja practices cello under the watchful eyes of cellist Thomas Roesseler. The young Palestinian player can scarcely be seen behind her instrument, which she has now been learning for two years.

"I was still a little nervous at the beginning," Yara said. "But it's a great opportunity to be able to play with these professionals. And after all, they've all been really nice," she added with a smile.

Her fellow pupil Faris Amin is also excited: "It's been great to get to play for three days and learn new things," he said, before quickly getting back to his music.

This institution sponsored by the Barenboim-Said Foundation is one of the few music schools in the Palestinian West Bank. The foundation itself is largely financed by the Andalusian regional government (Junta de Andalucía) in Spain. Since the music school opened in 2006, kids and young people have been able to learn music instruments and receive basic training in classical music there. 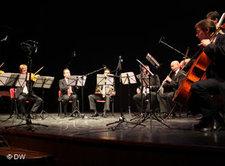 ​​ "Workshops with international musicians open doors to them – not just to the world of classical music, but also in terms of cultural dialogue," explained Nabeel Abboud Ashkar, director of the music academy. "Especially in such an embattled region, that's important."

The musicians of the Polyphonia Ensemble agree. "The people here are interested in classical music," said Martin Koegel, "but they don't have all of the training and educational opportunities that we have in Europe, for instance. And we want to do what we can to help."

In the West Bank for the first time in December 2010, the Polyphonia musicians have already offered similar workshops in other countries, most recently in Algeria and Morocco, with support from the German Foreign Office and Deutsche Welle. The children's industriousness and quick learning pace also make for great experiences for the musicians, they said.

As the workshop comes to a close, it starts to get serious for the young players. The Kasaba Film Theater in Ramallah is the venue for the first of their three concerts, in addition to an extra concert performed by the beginners. The more experienced musicians will play on stage alongside their workshop leaders from Germany.

For Mira Abu Elassal, a young cellist, that marks a very special moment: the young Palestinian from Nazareth hopes to become a professional musician. Concerts like these are a great way for her to get experience..

The West-Eastern Divan Orchestra
Consoling Concertos
Daniel Barenboim is on tour with his Israeli-Arab orchestra in times of war. He regards it as an "independent republic" – and he has a message to pass on that is otherwise all but drowned out by the noise of the battlefield. By Sonja Zekri

Oriental Music in the West
A Creative Musical Laboratory at the Heart of Germany
The Morgenland Festival Osnabrück is setting new standards in the encounter between the West and the East. This year's focus was the music of the Uyghurs, the Muslim minority in China. Stefan Buchen went along

END_OF_DOCUMENT_TOKEN_TO_BE_REPLACED
Social media
and networks
Subscribe to our
newsletter