Libya's leader Muammar al-Gaddafi has shown many faces since he overthrew the monarchy in 1969. But the one-time pariah certainly has not lost his love of provocation. Rudoplh Chimelli looks back on 40 years of Gaddafi's leadership 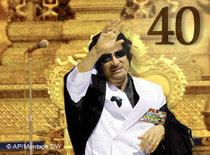 ​​ In terms of political staying power, Muammar el-Gaddafi has outlived almost everyone else. He has been in command of his country longer than Mao, Stalin and the other dictators of the past century, longer than all the other Arab potentates, longer than any democratically elected politician anywhere on earth.

When the Libyan leader officially celebrates his 40th anniversary of deposing King Idris as a 27-year-old army captain, only Fidel Castro will look back on two years longer in office. Yet Gaddafi doesn't actually hold an office. He has never been president or head of a state party. He simply holds sole sway over Libya, and that for the past four decades.

Gaddafi's anniversary celebrations may well be spectacular, but they were not held in quite such prestigious company as he might have hoped.

Repercussions of the Megrahi incident

Portrait of the dictator as a young man: Muammar Gaddafi in Tripolis, one year after the coup

​​ France's President Nicolas Sarkozy, prematurely announced as a guest of honour by Tripoli, had denied his participation. Neither the Russians Dmitry Medvedev and Vladimir Putin nor the Spanish king and queen have confirmed their official presence as declared in Tripoli.

All of them, it seems, are running scared of posing on a VIP stand with the recently repatriated Lockerbie bomber Abdelbasset Ali al-Megrahi in the background. But to make up for it, the event will feature dozens of African heads of state, Venezuela's Hugo Chávez and plenty of other good old anti-imperialists.

It is this anti-imperialism that forms the constant factor in Gaddafi's biography, albeit in a pruned form that helped him make the leap from the one-time pariah, Ronald Reagan's "mad dog of the Middle East", to a courted star of the international politics circus.

The "King of Africa"

Gaddafi has come a long way since then. Libya has rebuilt solid relations with the USA, with all the former sanctions long since lifted and a constant stream of western heads of government lifting the flap of Gaddafi's tent. He is chairman of the African Union and is flattered to be presented as the "King of Africa".

Libya has presided over the UN human rights committee and is currently a member of the security council. This month Gaddafi will attend the general assembly in New York for the first time to hold a speech.

Yet the aging revolutionary has not changed his ideas, as his whole-hearted embracing of Megrahi shows. He has not lost his love of provocation, and still enjoys boasting. 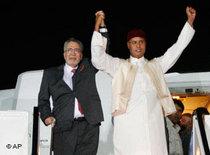 ​​Even though he has been paying compensation for the bombings and putting his wide knowledge of underground Arab movements at the Americans' disposal since 9/11 – the Islamists have set their sights on him too – he certainly doesn't want to come across at home as a puppet of the West.

And that's why Gaddafi produces false comparisons: weren't the Bulgarian nurses condemned to death in Libya? Wasn't it agreed that they were to serve their prison sentences at home after their costly extradition? Were they not nevertheless given a joyful welcome by their president and European dignitaries, as victims of Libyan despotism?

"Are we donkeys, and they humans?" was Gaddafi's public comment on the West's indignation over Megrahi's treatment as a national martyr. Anyone north of the Mediterranean or west of the Atlantic knows that his parallels are false. But they go down well in Libya.

And Gaddafi's son Seif-ul-Islam made good use of the opportunity to accompany Megrahi home from Scotland, raising his public profile in comparison to his brother and rival for successorship, Motassem-Billah.

Gaddafi has not written a success story during his 40 years in power for the "mass state" he designed. The country exports barely less crude oil per head of its only six and a half million inhabitants than Saudi Arabia.

Yet the differences in standards of living, infrastructure and development are overwhelming. Nobody is starving in Libya. Yet wages are extremely low and unemployment is almost the norm among young people. There are barely any jobs other than with the unproductive state. 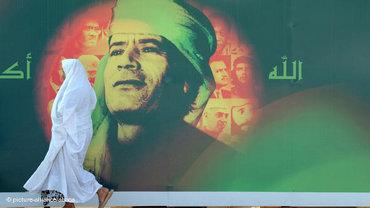 Anti-imperialism as a constant factor in the colonel's political biography: Gaddafi poster in Tripolis

​​ A large proportion of the oil income has been wasted on prestige projects, armaments and payments to supposed friends and allies.The "brother leader's" ambition to drive ahead pan-Arab unity has run aground.

He concluded almost a dozen union agreements with his neighbours Egypt and Tunisia but also with more distant states such as Morocco and Syria. Yet none of them were worth the paper they were printed on, as no Arab head of state was willing to tolerate Gaddafi's claim to leadership – while he was not willing to accept any smaller a role.

He has been on the brink of leaving the Arab League on more than one occasion. He has always refused to admit just how minor his Arab neighbours consider Libya's intellectual and civilising potential. Just as he refuses to understand that his new allies in Africa are simply lured by the fascination of his money.

Thanks to Gaddafi, former Bedouins now live in ugly concrete houses with refrigerators and eat imported second-class food. Not long from now, he may well end up the last desert romantic to live in a tent and drink camel milk.

Political Reforms in Libya
Revolutionary Rhetoric or Radical Change?
Last year, Colonel Gaddafi announced his intention to modernise the Libyan "state of the masses". At the recent General People's Congress, however, some of his decisions were rescinded, leaving widespread confusion among Libyans and experts alike. Beat Stauffer has the details

END_OF_DOCUMENT_TOKEN_TO_BE_REPLACED
Social media
and networks
Subscribe to our
newsletter