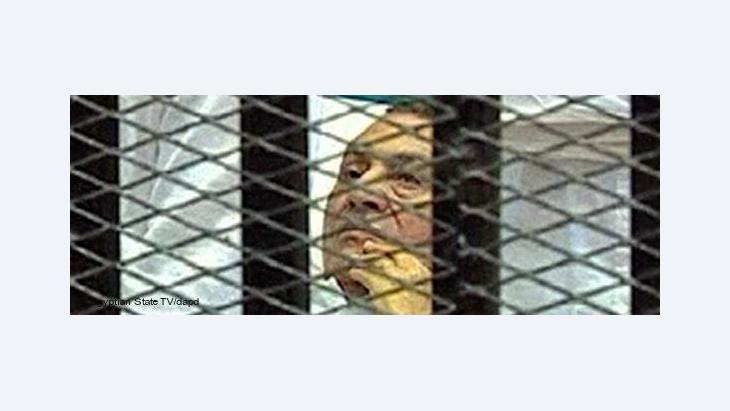 Hosni Mubarak ruled Egypt for 30 years. In February, he stepped down after weeks of protest against his regime. Now, Egyptians are thrilled to see him on trial, writes Bettina Marx

History was made in Cairo today. For the first time, a toppled dictator has had to stand trial and answer to his country's judiciary, and thus his people.

Hosni Mubarak, who ruled Egypt for 30 years, has been forced to stand before a court. In fact, in his case, it was rather to lie than to stand, since the aged ex-president was wheeled into the courtroom on a stretcher. He was locked into a cage along with his two sons, former interior minister Habib al-Adli and other defendants to attend the opening of the trial and the reading of the charges.

Pictures of defendants behind bars are not uncommon in Egypt: people have seen terrorists on trial, as well as opponents of the regime and members of the democratic opposition, suppressed, persecuted, gagged and tortured for years by Mubarak and his security forces.
Now, representatives of this very regime stand before the judge and the people. It is hard not to feel a certain degree of satisfaction upon seeing them on trial. But this trial is not about revenge, it is about justice for the victims of the revolution who were killed or injured by Mubarak's henchmen. It's about justice for citizens who were kept from participating in the political process for decades and cheated out of prosperity and a future by their greedy leader and his corrupt cronies.

Many can expect to be spared 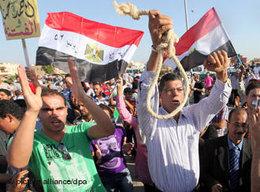 But this trial is not about revenge, writes Bettina Marx, it is about justice for the victims of the revolution who were killed or injured by Mubarak's henchmen

​​The shame and disgrace of this public trial have caught up with Mubarak, his sons and some of his former party followers. Others who are guilty and who profited from the Mubarak regime still await charges – although it is already clear that many of those who bear a share of the responsibility will never be brought to trial.

For instance the military that Mubarak relied on for decades and that profited from his kleptocratic rule: they now stand at the head of the state and no one knows whether they will pass on that power to a democratically elected government.

Mubarak's friends in the western democracies will not be held accountable, either. They will explain away their support of the dictator as a political necessity, as strategic thinking. But the citizens of the countries in question should not forget that their governments were loyal to Mubarak even as the Egyptians were already taking to the streets in protest. It wasn't until it became clear that he would not last that they dropped him.

On this historic day in Cairo, western leaders should consider whether it isn't a day of shame for them, too.

Moncef Marzouki was Tunisia's first democratically elected president after the fall of dictator Ben Ali. Today he is the most prominent critic of increasingly counter- ... END_OF_DOCUMENT_TOKEN_TO_BE_REPLACED

Asef Bayat, professor of Sociology at the University of Illinois, Urbana-Champaign, has been studying revolutions and how they affect people since 1979. In his recent book, " ... END_OF_DOCUMENT_TOKEN_TO_BE_REPLACED

Every year in December, the team at Qantara.de takes a look back at the articles that proved most popular with our readers. This year is no different. Here is a run-down of the ... END_OF_DOCUMENT_TOKEN_TO_BE_REPLACED

In this new bilingual edition, translated by Humphrey Davies, al-Jawbari, one of the thirteenth century's leading experts in skullduggery reveals all there is to know about the ... END_OF_DOCUMENT_TOKEN_TO_BE_REPLACED

Moroccan sociologist Fatima Sadiqi believes that women's movements in North Africa have changed over the past ten years. Today, women from all social classes are fighting together ... END_OF_DOCUMENT_TOKEN_TO_BE_REPLACED

Ankara is seeking to improve its relations with several states in the Middle East – such as the United Arab Emirates, Egypt and Israel. There are several reasons for this. ... END_OF_DOCUMENT_TOKEN_TO_BE_REPLACED
Author:
Bettina Marx
Date:
Mail:
Send via mail

END_OF_DOCUMENT_TOKEN_TO_BE_REPLACED
Social media
and networks
Subscribe to our
newsletter