The man is a star in the Turkish-German community, German foreign minister Steinmeier's integration poster-boy – and has been suspected of Islamism. The R'n'B singer Muhabbet has just released his third album. By André Tucic 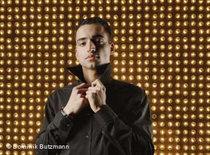 For the Turkish newspaper "Hürriyet" he is the "king of German Arabesque". Originally from Cologne, the 25-year-old Turkish-German singer Muhabbet now lives in Berlin

​​ "Sie liegt in meinen Armen" (She's lying in my arms), written by Murat Ersen alias Muhabbet, was the anthem of the year in Germany's Turkish community in 2005. The 25-year-old R'n'B singer combines oriental pop with hip-hop and rhythm & blues.

His third album has just come out, with the less than subtle title "Das Album". "The songs have a dirty R'n'B touch," says Muhabbet. He is a star of the Turkish-German music scene and even wrote Turkey's theme song for the 2008 European football cup.

Muhabbet's road to success started when he uploaded the pathos-laden single "Sie liegt in meinen Armen" onto the internet in 2003. Several thousand downloads later, the producer Ünal Yüksel signed him up to his company Plak Music. And it was Yüksel who got Muhabbet a record deal with Sony BMG.

His first album "RnBesk" came out in 2005, with "Sie liegt in meinen Armen" selling over 250,000 times via download portals. The next logical step was a tour, reaching its climax at Berlin's "Turkish Day", where Muhabbet performed to a rapt audience of 150,000. His second album "In deinen Straßen" (In your streets) followed in summer 2007.

Muhabbet uses his high public profile for social initiatives, supporting an anti-violence campaign run by the youth magazine Bravo and acting as a UNICEF representative and "role model of the year" for the SOS Children's Village initiative in Berlin in 2006. He has also been an ambassador for "Football Meets Culture", an educational project organised by the Frankfurt Book Fair.

Muhabbet has also been involved in the Ernst Reuter Initiative, founded in 2006 by the German foreign minister Frank-Walter Steinmeier and his Turkish counterpart at the time, Abdullah Gül, to promote dialogue between the two countries.

He is currently campaigning for the German Bone Marrow Donor Centre. All this voluntary work is no coincidence – Muhabbet knows how hard life can be for migrants in Germany. Although he has been living in Berlin for several years, he was born to Anatolian immigrants and grew up in the Cologne suburb of Bocklemünd – the city's answer to France's banlieues.

Muhabbet got into trouble at school and saw the inside of a young offenders' institution on remand for the first time at the age of 12. "I was arrogant and got bad marks," comments Muhabbet. "They sent me to the school psychologist every other year." He left home at 16 and never went back.

Between provocation and glorification of violence

Social workers at a youth centre spotted his talent and encouraged him to start making music. So he and his brother founded the band "Kanaken Kollabo", turning out hard rap with soft soul vocals. Their music was considered sexist and violent.

"We were young and we wanted to be provocative," Muhabbet says looking back. One of the over 500 songs the brothers recorded and distributed via the internet even paid tribute to the Turkish youth organisation Grey Wolves.

"We didn't know what they stand for. Kurdish and Alevi friends told us and then we quickly dropped the whole thing," says Muhabbet, who now clearly distances himself from the extreme right-wing party with its pan-Turkic ambitions. 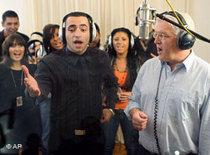 ​​ Nowadays he is a popular figure among German politicians, wooed for his social engagement. Muhabbet performed at the German president Horst Köhler's summer party in July 2007. Four months later, he recorded a song in praise of openness and tolerance in Germany – with the German foreign minister Frank-Walter Steinmeier and his French counterpart Bernard Kouchner.

Under suspicion of Islamism

In the wake of this public success came a scandal: the journalist Esther Schapira accused Muhabbet of condoning the murder of the Dutch filmmaker, writer and satirist Theo Van Gogh. Van Gogh was killed in broad daylight in Amsterdam by the Moroccan-born Mohammed Bouyeri in 2004.

In his film Submission, Van Gogh had projected qur'anic verses onto the skin of a naked woman in a mosque. Schapira won a Prix Europa award in 2007, a European prize for television productions, for her documentary about the filmmaker's murder Der Tag, an dem Theo Van Gogh ermordet wurde.

Muhabbet was also present at the awards ceremony, and Schapira claims he told her Van Gogh was lucky to have died so quickly. There were enough people, he is alleged to have said, who would have locked him in a basement and tortured him. Schapira made his statements public, bringing Muhabbet under suspicion of Islamism. 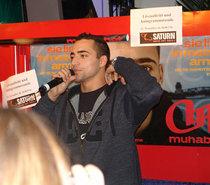 Undented popularity: Muhabbet's song "Wie Lange" has been downloaded from his website some 200,000 times in the past three months alone

​​ The singer went to court and won his case. "The case was dropped because there was no proof. The whole thing was an incredible cheek," Muhabbet recalls. It hasn't put any of his fans off, apparently. "My fans support me. But I've been very careful about journalists since then," he says.

Despite this scepticism, Muhabbet is working hard to promote his new album. But not at any price – he has even parted ways from his record company. "I'm not playing along with that kind of music business any more. I'm not interested in getting my videos on commercial channels and signing autographs in supermarkets," he says.

There were strategic reasons for leaving Sony BMG as well. "Music retail is dead, everyone downloads music illegally on the internet. So I decided to put my songs on sale on the net and appeal to my fans' conscience," says Muhabbet.

Neither the suspicions of Islamism nor his self-marketing have dented his popularity. In the past three months his website has had some three million visitors, with the song "Wie Lange" (For how long) downloaded over 200,000 times.

Turkish Arabesque Songs
Sensitive Machos
When men feel too much love: Turkish arabesque songs are climbing the German charts. Artists like Muhabbet or Mehmet & Murat are drumming up quite a following on the Internet. And the record companies are starting to knock on their doors. Daniel Bax reports

END_OF_DOCUMENT_TOKEN_TO_BE_REPLACED
Social media
and networks
Subscribe to our
newsletter