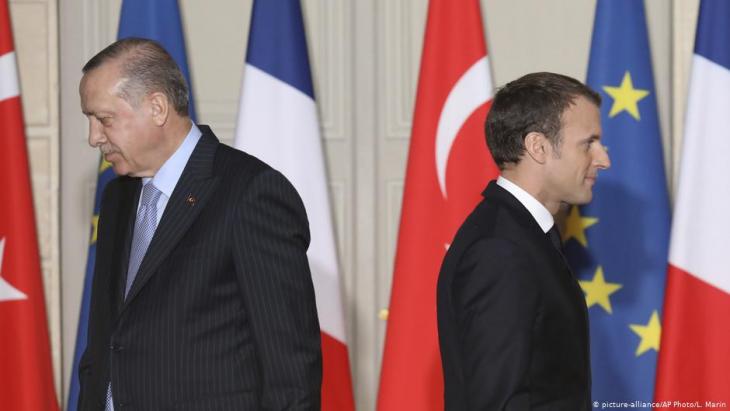 French President Macron's statements that caricatures of Muhammad may still be published have triggered outrage in a number of Muslim states. Turkish President Erdogan is among the most vocal critics. Karim El-Gawhary reports

In the Islamic world, the usual suspects have tried to twist the French President's statements on the Muhammad cartoons. Turkish President Erdogan called Emmanuel Macron "sick", saying his head should be examined.

He then called on his compatriots to boycott French products, claiming that Muslims were now the victims of a lynching campaign like the one that once targeted Jews in Europe. Meanwhile in Berlin, German Foreign Minister Heiko Maas (SPD) reaffirmed the country's solidarity with France, censuring Erdogan's personal attacks on Macron as a "new low" and "totally unacceptable".

Calls to boycott and accusations of Islamophobia

The background behind this controversy is Macron's official statement on Wednesday in response to the murder of the teacher Samuel Paty. Macron defended the controversial Muhammad caricatures and France's secular values and called for action to be taken against radical forms of Islam.

But while Erdogan seized the moment to settle a number of outstanding accounts with Macron – such as the dispute over the oil and gas reserves in the Mediterranean, where France has been the most vehement in taking Greece's side against Turkey – other Islamic countries did not call for a boycott but did denounce Macron's words. 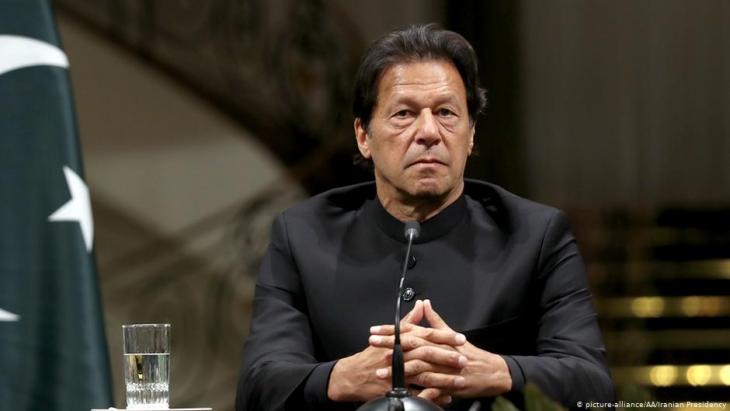 Pakistan's Prime Minister Imran Khan accused the French President of Islamophobia. "President Macron has attacked and hurt the sentiments of millions of Muslims in Europe and around the world," he wrote on Twitter. Khan also called for a ban on Islamophobic content on Facebook. The Gulf Cooperation Council in turn released a statement describing Macron's words as "irresponsible" and saying they were aimed at "spreading a culture of hatred among people".

The Organisation of Islamic States condemned the "French attacks against Muslims" and the "insulting cartoons" directed against them. Ahmed al-Tajib, the Grand Sheikh of Al-Azhar University in Cairo and one of the most important legal authorities of Sunni Islam, spoke of a systematic campaign to push Islam into political struggles.

Previously, the university had condemned the murder of the French teacher Paty, but added that insulting religions in the name of freedom of expression was an incitement to hatred. Most of these statements denounce the cartoons and their defence. 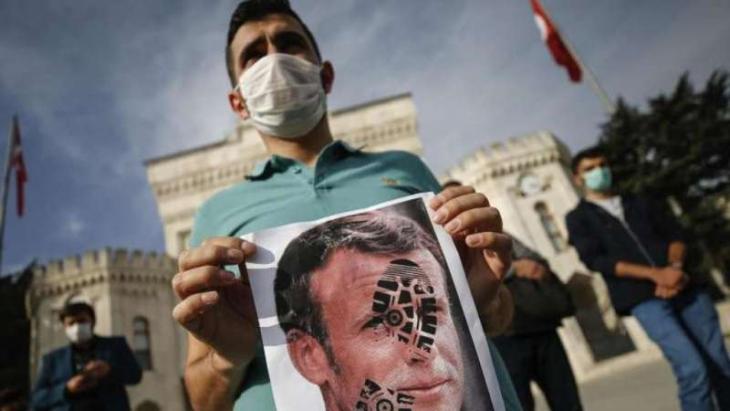 Otherwise, the culture war that has now been resuscitated is taking place mainly in the social media bubble. It is a tempest in a Twitter teapot – more precisely in the Islamist Twitter teapot. French flags are being diligently crossed out and people urged to boycott the French supermarket chain Carrefour. Somewhere in Qatar or Kuwait, videos show French cheeses labelled with laughing cows being removed from shelves and replaced by boycott signs.

Western media are quick to spread dire news of a new culture war breaking out, and the Islamist bubbles on social media are only too happy to comply. But it is not yet clear if people are really obeying these boycotts. A quick glance at Carrefour's full parking lot shows that the controversy has little effect on the lives of most people in the Arab world. It is more important to them that the French chain has better prices than the neighbouring American supermarket. According to UN statistics, two thirds of Arabs live below the poverty line or are on the verge of falling below it. Special offers are always more attractive than a culture war.

And for devout Muslims who are nonetheless concerned, there are always voices like that of the "Muslim World League", which is taking a different course. "Cartoons can neither hurt nor offend the Prophet, for he is too great and holy to be offended".

Saudi Arabia's Council of Senior Scholars published a statement saying that "an insult to prophets cannot hurt them, but can only lead to radicalisation". Islam calls on people to just ignore the ignorant, the Council adds. Others, such as the Saudi author Turki Al-Hamad, do not see the whole thing as a dispute between France and the Muslims. "It is the Muslim Brotherhood that wants to frame Macron's words as a campaign against all Islam," he writes.

"Macron's 'crisis of Islam' is boring," tweets the Egyptian sociologist Amro Ali by contrast, while "the actual crisis in the Muslim world is partly aggravated by him selling weapons to dictators". Indeed, the Arab autocrats in Qatar, Saudi Arabia and Egypt were among the biggest clients of the French arms industry last year.

As Qatar prepares to host the 2022 FIFA World Cup, the country has come under fire for its treatment of migrant workers, with some nations calling for a boycott of the contest. ... END_OF_DOCUMENT_TOKEN_TO_BE_REPLACED

Urban transport concepts in the global South, often promoted by organisations such as the World Bank, aim to encourage motorised private transport – at the expense of non- ... END_OF_DOCUMENT_TOKEN_TO_BE_REPLACED

Tents, mud and cold: refugees contend with miserable conditions in Bosnia & Herzegovina. With the European Union demanding that Bosnia accommodate the asylum-seekers, its ... END_OF_DOCUMENT_TOKEN_TO_BE_REPLACED

Authorities in Bangladesh started sending a first group of more than 1,500 Rohingya refugees to the isolated island of Bhasan Char, despite calls by human rights groups for a halt ... END_OF_DOCUMENT_TOKEN_TO_BE_REPLACED

With the first COVID-19 case having been detected in the Kutupalong Rohingya refugee camp in Bangladesh, aid agencies are warning that without additional resources, there will be ... END_OF_DOCUMENT_TOKEN_TO_BE_REPLACED

According to the latest Reuters tally, more than 2.54 million people are now reported to have been infected by the novel coronavirus globally and 177,004 have died. As Muslims ... END_OF_DOCUMENT_TOKEN_TO_BE_REPLACED
Author:
Karim El-Gawhary
Date:
Mail:
Send via mail

END_OF_DOCUMENT_TOKEN_TO_BE_REPLACED
Social media
and networks
Subscribe to our
newsletter