A Spiritual Bridge between East and West

To this day, activists of various political hues still draw on the thinking of Muhammad Iqbal, Pakistan's spiritual father and influential 20th-century philosopher, to such an extent that he also looks set to play a significant role in the future of the country. Stephan Popp introduces the man known as the "Scholar" 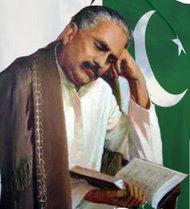 The great poet-philosopher of British India and the founder of the idea of Pakistan: Muhammad Iqbal (1877–1938)

​​ Among those who are seen by the people of Pakistan as one of the founders of their country is a poet: Muhammad Iqbal (1877–1938). That in itself is not surprising: throughout Asia, poetry is seen as a direct expression of a person's education. As well as being a poet, Iqbal was also a prominent philosopher, who saw the individual, the free development of personality, and a passion for the good of the people as central to Islam.

As a result he was familiar with Kant, Hegel, Nietzsche and Bergson to an extent unmatched by any other Muslim thinker. He turned his philosophy into verse, becoming the counterpart to Tagore and eventually, after his death, the national poet of Pakistan. Today, his philosophy is part of the Pakistani school curriculum, and many newspapers carry a daily column featuring his verses.

Muhammad Iqbal was born in Sialkot, not far from Kashmir. It's a town which is nowadays better known for its production of footballs. His parents were pious and believed in a pantheist Islamic mysticism which Iqbal initially adopted and then opposed energetically, although he remained a pious Muslim throughout his life.

Iqbal learnt about the English romantics in school, and he wrote his first poems in their style. As was usual at that time, he was married at eighteen and then began to study in Lahore, the capital of Punjab, which at that time was a multicultural city with only a slight Muslim majority. It was well-known for its cultural life, and there was lively discussion in the city about modernisation and romantic nationalism. 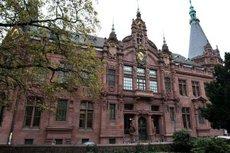 ​​ Muhammad Iqbal went to poetry readings, and his first poems in Urdu appeared regularly from 1901 onwards. The earliest are mainly romantic works, which give way to romantic nationalism, such as in "The Song of India" which is nowadays sung on India's national day. Iqbal also composed the first children's poem to be written in Urdu.

Iqbal went to Cambridge in 1905, studying philosophy with the neo-Hegelian John McTaggart, as well as law. He was expected to read Hegel in the original, so he went to Heidelberg in 1907. There he fell in love with his German teacher, Emma Wegenast, who introduced him to Goethe's "Faust," Heine and Nietzsche.

There was no future for their relationship, which remained very correct throughout, but Emma had a strong influence on Iqbal's very Wilhelmine view of German culture. Iqbal eventually completed his doctorate in Munich on "The development of philosophy in Iran" and returned to Lahore in 1908.

He began to teach at the university once more and also practiced as a lawyer. He also suffered a serious existential crisis. One consequence of the crisis was that he developed his own interpretation of Islam, influenced by Goethe, Hegel and Nietzsche, in which self-fulfilment and the Faustian ideal were at the centre of the religion. Two didactic poems of the time – "Complaint and Answer" (1912) in Urdu, and "The Secrets of the Self" (1915) in Persian – make this clear.

Traditional circles considered both these poems as godless works, and the scandal which resulted made him famous. He was able to counter the accusations of heresy with his next work, "Hints of Selflessness" (1918).

The crucial point in Iqbal's philosophy of self-fulfilment is that not only individuals but also peoples can fulfil themselves. In the case of British India, that was an argument for the superfluousness of colonial rule. Colonial ideology claimed to be bringing rational science and technology to the "emotional" Indians. Iqbal turned this claim around, and declared that values can only be founded on the emotions, and the West was headed for destruction if it didn't learn, like Islam, to consider values important. 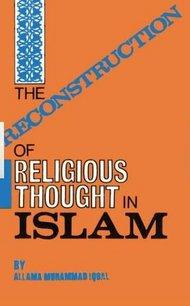 Iqbal expressed fears that secularism would weaken the spiritual foundations of Islam and Muslim society. Cover of Iqbal's 1930 opus magnum

​​ Iqbal gave the name "love" to his passion for moral progress in the form of an all-embracing self-fulfilment, and the home of this spiritual attitude was for him the East. This is a view which one still often finds in Pakistan.

During the years of crisis in British India, Iqbal became not just a Muslim modernist but also a pan-Islamist. He could see that, in Europe, nationalism was leading to war-mongering, and so he discovered in Islam a power which united all people in "love," morality and self-fulfilment. His next volume of poems, "The Message of the East," was an answer to Goethe's "West-Eastern Divan." The following volume in Urdu was "The Call of the Marching Bell" (1924).

Iqbal then entered politics and, in 1928/9, he presented his philosophy in "The Reconstruction of Religious Thought in Islam." At the opening of the annual conference of his party in 1930 he held a speech which is seen in retrospect as the birth of the idea of Pakistan. He called for the areas in Western India which had a Muslim majority to be made into a single province. He left it open as to whether this should be within or outside India. He would have welcomed the creation of Pakistan, but he would have soon been disappointed, as were so many others, at the regionalism and the lack of willingness to modernise which he would have encountered.

A poet for the future

In 1931 and 1932 Iqbal went to London to take part in the conferences on the future of India. He travelled through Europe once more (although he did not meet Emma again). He published an epic, "The Book of Eternity," which provides a good way into his thought. In the book he takes an imaginary journey to heaven, where he debates with the poets, thinkers and politicians of the past. In 1933, he also helped to found the University of Kabul. In 1934 there followed another collection of poems in Urdu, "Gabriel's Wing." His health was already deteriorating and he died on April 20th, 1938.

Iqbal's significance for Pakistan, and also for Afghanistan, can scarcely be exaggerated. Everyone, from the Taliban to the feminists, quotes his works, and Pakistan still sees it as its task to follow his call for self-fulfilment. Democracy activists especially refer to him, so that he will continue to play an important role in Pakistan's future.

Stephan Popp is a researcher at the Institute for Iranian Studies at the University of Bamberg. He published "Muhammad Iqbal, ein Philosoph zwischen den Kulturen" ("Muhammad Iqbal, a philosopher between cultures") in 2007.

Muhammad Iqbal
The Reconstruction of Religious Thought in Islam
Muhammad Iqbal is regarded as one of the great thinkers of the Islamic Awakening. His major philosophical work has now been published in German. The book is a timeless intellectual challenge of the first rank, says Ludwig Amman

Comments for this article: A Spiritual Bridge between East and West

Thank you for writing and translating this article. I have always been fond of studying Allama Iqbal's relationship with Germany. I want to study "Muhammad Iqbal, a philosopher between cultures" (off-course in English), is there any way to get it online as an ebook?

END_OF_DOCUMENT_TOKEN_TO_BE_REPLACED
Social media
and networks
Subscribe to our
newsletter