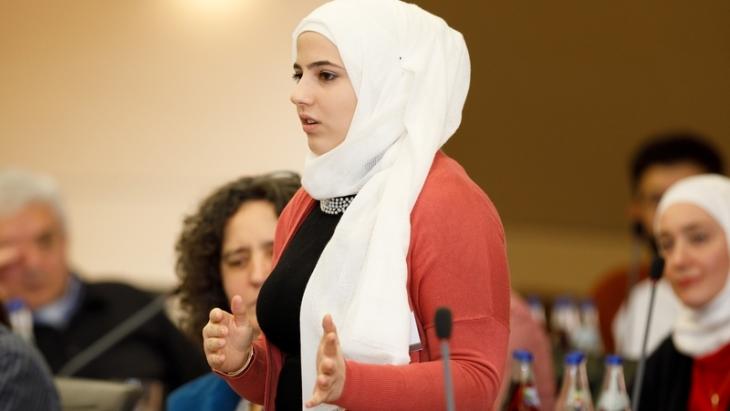 Twenty-five Syrian refugees were accepted onto a one-year trainee programme in municipal administration with seven German local authorities. As it turns out, the Syrians were not the only ones to benefit. Claudia Mende reports

Initially, things were difficult for both sides. The people working in local government administration didn’t know what to expect. They had never had to work with trainees quite like these. And on the other side, everything was new to the Syrians, not only the language, but also office etiquette and procedures. They had absolutely no idea what would be demanded of them.

The biggest surprise for the Syrians was "that the municipal administrative staff actually worked to address the concerns of citizens," said 23 year-old Hane Moshmosh. In Syria, citizens were expected to pay bribes before local officials would take any action. Moshmosh comes from Damascus, where he studied economics before the war in Syria forced him to abandon his university studies.

He was one of 25 trainees chosen from across Germany to take part in the "Communal Know-How for the Middle East" initiative launched by the Engagement Global development policy agency. In 2018 and 2019, these trainees were introduced to the working methods of German municipal administrations. The aim was for the trainees to observe how administrative structures and democratic processes function at the local level.

At the same time, they gained the opportunity to improve their chances on the labour market. Taking part in the initiative were municipalities of very different sizes and structures: the small community of Beverstedt in rural Schleswig-Holstein, the rural districts of Donau-Ries in Bavaria and Hameln-Pyrmont in Lower Saxony, the town of Maintal near Frankfurt, and the cities of Darmstadt, Giessen, and Krefeld.

The Syrian applicants ranged in age from 18 to over 50. Many had arrived from Syria with degrees in subjects such as engineering, architecture, IT, economics, psychology, and education, while the older ones amongst them also had work experience. Never before had the municipal services such qualified trainees at their disposal. During their year-long learning phase, they were paid the statutory minimum wage, financed by the Federal Ministry for Economic Cooperation and Development.

They were introduced to the various departments in the local administrations, in particular those responsible for the press, culture, legal affairs, the environment, public order, land use, public utilities, building, the municipal archive, tourism, and IT. This provided the trainees with a glimpse into the whole range of administrative activities. 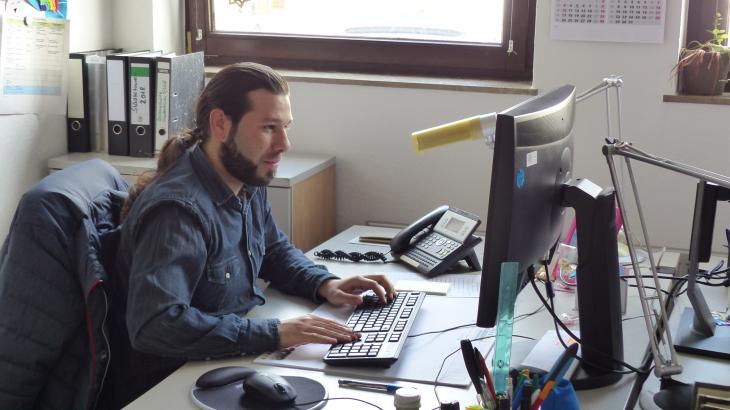 Chance to start over: Ahmed al Hamoud, 28, was born in Homs and has lived more than three years in Germany. The law degree he began in Syria he was unable to complete in Egypt for political reasons. So he fled to Germany via Turkey, hoping to be able to complete his studies. He gladly accepted the offer of a traineeship in the town of Maintal, because, as he says, "I like to work with legal texts and I wanted to know how a local authority in Germany functions"

Some trainees were lucky enough to gain insights in areas of work directly related to their studies or professional qualifications. Unfortunately it was not always possible for trainees to work in their area of expertise, for example, offering an architect a position in the building department.

Samie Morad, a 30-year-old lawyer from Damascus, found his first days in the city administration of Krefeld to be a "culture shock". The rules and codes of conduct were very different to those in Syria. At first, the lawyer thought he would not be able to meet the requirements of the work. Bayan al Marashli, aged 22, found herself in a similar situation when she began her traineeship in Maintal. The high school graduate from Damascus was initially unsure how the departmental staff would react towards her. Everything was new and the language barrier was high. After a few days, however, she was able to relax as "everyone was so helpful and patiently answered all my questions."

Most of the trainees were able to promptly familiarise themselves with their tasks, improve their knowledge of German, and quickly grasp the unfamiliar procedures and rules.

Nonetheless, there were also some frustrating experiences, such as that related by Khaled Khalifeh, a 29-year-old civil engineer. Khalifeh, married with four children, had begun his studies in Syria, completing them in Egypt in 2012. He then had three years of professional experience working in the United Arab Emirates. In 2015, the family had to return to Syria, but fled to Germany eight months later. He was assigned a traineeship with the community of Beverstedt in Schleswig-Holstein.

Iranian artist Parastou Forouhar has lived in Germany since 1991. Full of rage, just like the protesters, she hasn't yet given up on the idea of justice. By Julia Hitz END_OF_DOCUMENT_TOKEN_TO_BE_REPLACED

Unflattering terms were used at a German Football Association human rights congress aimed at "intensifying the discussion" ahead of the World Cup. One speaker in particular made ... END_OF_DOCUMENT_TOKEN_TO_BE_REPLACED

Fariduddin Attar’s "The Conference of the Birds", one of the seminal works of Islamic mysticism, has recently been published in sumptuously illustrated German translation. It ... END_OF_DOCUMENT_TOKEN_TO_BE_REPLACED

Egyptian authorities have Mada Masr in their sights once again after critical reporting. But the editor of the country's last independent news source is adamant they will continue ... END_OF_DOCUMENT_TOKEN_TO_BE_REPLACED

Like Christianity, Europe's history is one of migration. Both have strong roots in the Orient and in cultures thousands of years old. Cultural historian Bernhard Braun invites us ... END_OF_DOCUMENT_TOKEN_TO_BE_REPLACED
Author:
Claudia Mende
Date:
Mail:
Send via mail

END_OF_DOCUMENT_TOKEN_TO_BE_REPLACED
Social media
and networks
Subscribe to our
newsletter