The demonstrations, which began in Shia districts, were brutally crushed. Moreover, the security forces used disproportionate force to clear the biggest demonstration of all on Tahrir Square in Baghdad. Activists who took part in the demonstration were persecuted, imprisoned and detained for several days in secret detention centres and other unofficial places. Such treatment is nothing less than kidnapping and torture with the intention to intimidate.

The best known victim related to this spontaneous uprising against corrupt authorities was the journalist and actor Hadi al-Mahdi, who was assassinated on 8 September 2011 in his flat in the Baghdad district of Karrada. Moreover, Jalal al-Shahmani, who took part in the demonstrations and was kidnapped on 23 September 2015 in Baghdad, went missing without trace. It is assumed that he was killed by his "unknown" kidnappers.

State institutions generally use the term "unknown" when referring in official statements to kidnappers or assassins. Although human rights and civil society organisations condemn the crimes, they avoid mentioning the perpetrators by name in their statements, even though the perpetrators are known. After all, the authorities are in contact with them in order to negotiate the release of the kidnap victims – or to at least find out more about the fate of those who were killed. 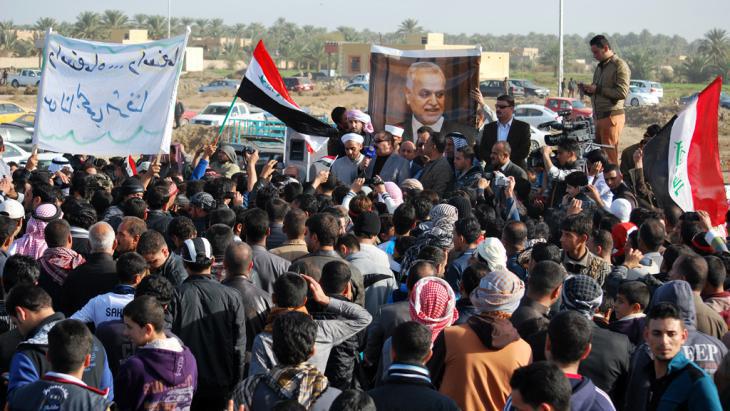 Resisting Shia dominance in politics, state governance and the armed forces: against a background of sectarian tension, Sunni tribes from Ramadi demonstrate their distrust of the al-Maliki regime on 23 December 2012

By not revealing the names of the perpetrators, the government and civil society organisations are not only intentionally keeping everything under wraps, they are virtually encouraging the armed groups that are spreading like a cancer throughout Iraq's cities to professionalise their terror operations. This is compounded by the climate of impunity and a civil society that has folded in the face of the effective tactic of non-stop intimidation and inactivity by the authorities.

Both the kidnapping of the journalist Afrah Shawqi (abducted on 27 December 2016 and released a week later) and the kidnapping of seven activists (abducted in the early hours of 8 May 2017 from their home in Saadoun Street and later set free in a remote field north of Baghdad) and other similar cases in the southern districts demonstrated that the perpetrators had changed tack.

Very different Western reactions to the suffering in Ukraine and the Arab world show that there is a profound rift among cultures. Essay by Michael Young END_OF_DOCUMENT_TOKEN_TO_BE_REPLACED

From the Euphrates to the Mekong, dams that ensure one country's water supply risk leaving others parched. But shared water resources can be a source of peace as well as conflict ... END_OF_DOCUMENT_TOKEN_TO_BE_REPLACED

Muqtada al-Sadr, the biggest winner in the recent election, aspires to implement great change in Iraq, but reform is easier said than done, writes Massaab al-Aloosy. Correcting a ... END_OF_DOCUMENT_TOKEN_TO_BE_REPLACED

With spring, migration on the Balkan route is on the rise again – and with it the misery, violence and illegal pushbacks at Croatia's external EU border. ... END_OF_DOCUMENT_TOKEN_TO_BE_REPLACED

Much effort is being put into rebuilding churches in Iraq that were destroyed by Islamic State. The message of hope is for Christians to return. Judit Neurink reports from Mosul END_OF_DOCUMENT_TOKEN_TO_BE_REPLACED

In Iraq – which has suffered four decades of conflict and years of political and economic turmoil – separating and recycling waste has yet to become a priority for most people. ... END_OF_DOCUMENT_TOKEN_TO_BE_REPLACED
Author:
Safaa Khalaf
Date:
Mail:
Send via mail

END_OF_DOCUMENT_TOKEN_TO_BE_REPLACED
Social media
and networks
Subscribe to our
newsletter