Above all, the uninhibited and anarchic armament on the streets of Iraq has strengthened a few armed groups that have now become more powerful than the state and the authorities. Their systematic terror is equal in every way to the terror of the so-called "Islamic State" and is perhaps even an extension of it. It certainly encourages this terror by weakening the state. 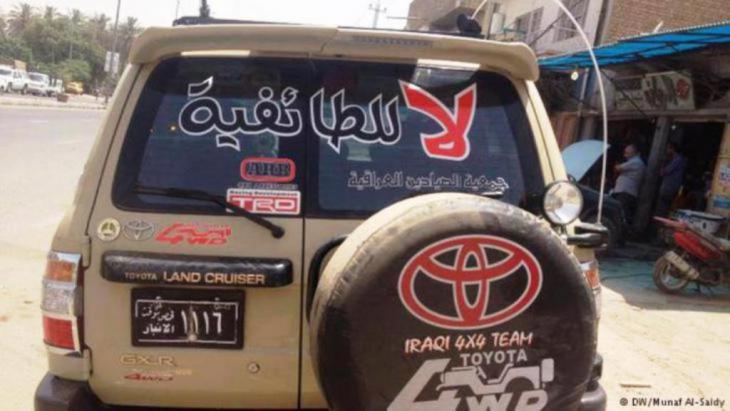 No to sectarian division: when it comes to intimidating their rivals, militia groups in particular are happy to indulge in sectarian violence. Moreover, social media has become a hub, both for those seeking to drive a wedge between the religious denominations and for the "online mercenaries", who agitate against any voice that is raised in protest at their destructive agenda in order to silence them. The armed groups, for their part, feel that this agitation is an appeal, entitling them to kidnap or even murder anyone who disagrees with them

However, in order to put a stop to the jihadist terrorist groups in particular, it is vital that the use of illegal weapons from abroad in the fight against terror be stopped, not the other way around. After all, sooner or later, these weapons will be turned on Iraqis themselves – particularly on those calling for a civilian state who are working against the power cartel to which the political parties and police belong.

Weapons are being used to force people to accept these groups′ extremist vision of the world, with the aim of creating a one-dimensional and closed-off society in which people buy into their extremist interpretations of religion – a society divided along ethnic, denominational and geographical lines. Finally, these weapons will also be used to drive civil society and democratic forces out of the cities, so that the dream of securing autocratic rule can finally come true.

Historically Iraq's Yazidi community was isolated, under-resourced and very conservative. Seven years after the "Islamic State" tragedy, the community is more open to the world – ... END_OF_DOCUMENT_TOKEN_TO_BE_REPLACED

Asef Bayat, professor of Sociology at the University of Illinois, Urbana-Champaign, has been studying revolutions and how they affect people since 1979. In his recent book, " ... END_OF_DOCUMENT_TOKEN_TO_BE_REPLACED

Young people in northern Iraq are so disillusioned that many are trying to leave the country any way they can. Some fear widespread discontent could push people toward potentially ... END_OF_DOCUMENT_TOKEN_TO_BE_REPLACED

In this new bilingual edition, translated by Humphrey Davies, al-Jawbari, one of the thirteenth century's leading experts in skullduggery reveals all there is to know about the ... END_OF_DOCUMENT_TOKEN_TO_BE_REPLACED

In Iraq, returning families of IS fighters have to turn to local initiatives for help, as there is no official path home. Judit Neurink met with families on the ground END_OF_DOCUMENT_TOKEN_TO_BE_REPLACED
Author:
Safaa Khalaf
Date:
Mail:
Send via mail

END_OF_DOCUMENT_TOKEN_TO_BE_REPLACED
Social media
and networks
Subscribe to our
newsletter