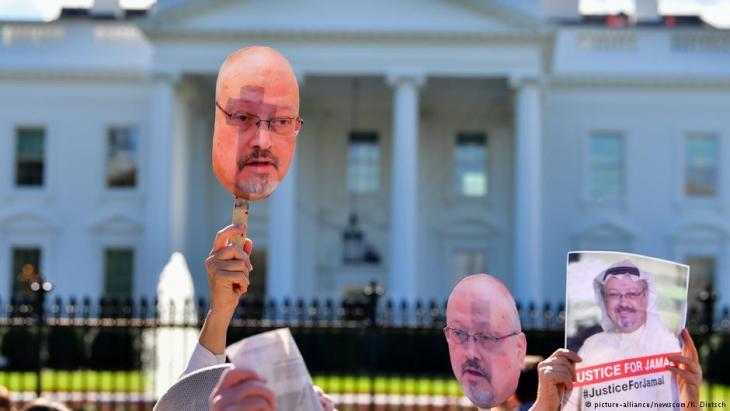 The gruesome killing of former Saudi government advisor and journalist Jamal Khashoggi will not lead to dissociation with Saudi Arabia, says Stefan Buchen in his essay. After all, the most powerful man in the West is Donald Trump, one of the murdererʹs best friends

Political newcomer Mohammed bin Salman miscalculated the situation in several respects. He thought he could slaughter an internationally-famous opponent of his followers in a closely-guarded consular building in Istanbul without the murder attracting any attention. He thought that if necessary, he would be able to simply reject any suspicion of murder and claim he had no knowledge of Jamal Khashoggiʹs whereabouts.

The Saudi successor to the throne was certain that at the same time, he would be able to host a glittering investment summit in his capital Riyadh attended by global business magnates, and be applauded and admired for it by leading international media. On all these counts, Saudi Arabiaʹs new, 33-year-old, strong man was completely off the mark.

Now he's banking on his explanation – that Jamal Khashoggi was killed in a "fist fight" at the consulate – soothing tempers and erasing the subject from global memory. But he's also misjudged things on that count as well, as shown by the reactions of numerous media outlets and several governments.

Mohammed bin Salman can, however, apparently rely on one thing: his alliance with Donald Trump. The President of the United States deemed the official Saudi explanation for how Jamal Khashoggi died to be "credible". The 72-year-old political newcomer had already prepped his young Arab friend's bailout version by stating that the death could only have been the work of autonomous "rogue killers", not state-sponsored killers. And then, it was also important for the experienced businessman Trump to remark that America would be following through on plans to sell 110 billion dollars' worth of arms to Saudi Arabia.

We need to be quite clear about the significance of what's happening here: the incumbent American president is using words to abolish the glaring reality and introduce another, an ersatz reality. We have been familiar with the "alternative facts" model since the start of his presidency. But now, for the first time, Trump is applying it to an international criminal case in which his close ally is the killer. 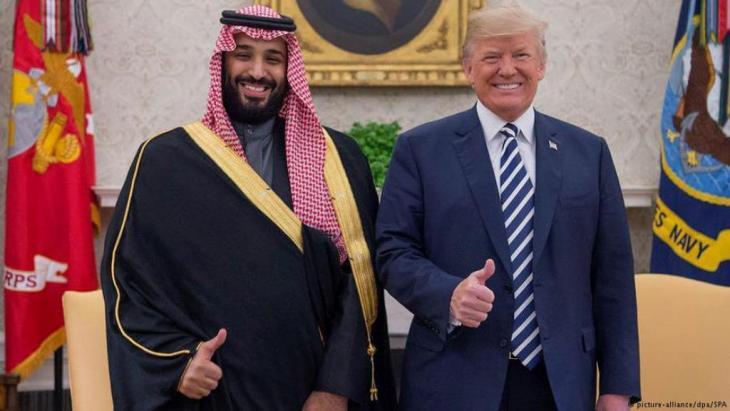 Business first, morality an afterthought: "In Trump's world, it's possible to relativise a murder by speaking ill of the victim. Language thus loses its essential function, namely as a means of describing reality and communicating moral standards," writes Stefan Buchen

The reality is being publicly aired, by diverse media from "Der Spiegel" through to "The Washington Post": Mohammed bin Salman is a murderer. The immediate details, the matter of the bone saw, are grim. The less-immediate details cast America in an unflattering light: early this year, the Saudi heir to the throne was given a triumphal reception: in Washington, New York, Silicon Valley, Hollywood and Seattle.

Mohammed bin Salman was feted as the go-getting reformer setting out to modernise the rather fusty Islamic Kingdom of Saudi Arabia. He has permitted women to drive cars, authorised cinemas wow! PR agencies in Washington have earned a fortune – "billions" according to "Foreign Policy" magazine – cultivating the reformer image.

Cracks in the high-gloss veneer

This carefully-nurtured faux depiction has remained unblemished by the war in Yemen, the blockade against Qatar, the temporary abduction of Lebanese Prime Minister Hariri and the support for radical Islamists in the Syrian war. It has even survived the brutal action taken against internal opponents, from journalists through to disagreeable branches of the ruling Al Saud family.

It would now be fair to say that all that hard work by highly-paid PR professionals with their degrees from Stanford, Princeton, Yale and of course Harvard was rendered null and void on a single October afternoon in the Saudi consulate in Istanbul. And that no image campaign in the world could put a positive spin on the bone saw angle. But only those who cling to a traditional and regular idea of veracity think that way.

Let’s not deceive ourselves: the high-gloss image peddlers fit perfectly into Trump's world. They create an alternative reality. And they're still at it. For example, we're suddenly hearing that Jamal Khashoggi wasn't actually "the good guy" at all. After all, he sympathised "with Islamists". Small wonder then, that someone like that got in the way of the Saudi monarch's thirst for reform!

In Trump's world, it's possible to relativise a murder by speaking ill of the victim. Language thus loses its essential function, namely as a means of describing reality and communicating moral standards.

One must also treat with caution declarations from American business bosses that they won't be attending the Riyadh investors' conference. Not in the sense that Amazonʹs Jeff Bezos, Blackrock boss Larry Fink and the CEO of Uber Dara Khosrowshahi are likely to travel in secret this week to Mohammed bin Salman and his "Davos in the desert". But rather because their cancellations by no means indicate that these companies will never again conduct business with Mohammed bin Salman. The company bosses will not be able to resist the lure of the convenient slipstream offered to them by Trump on the road to the new Saudi Arabia under Mohammed bin Salman.

One German businessman follows Trump's line with no deviation: Joe Kaeser, CEO of Siemens. He had intended to attend the Riyadh investors' conference and explained why at an event in the Canadian city of Toronto: "If we stop communicating with countries where people are missing, then I might as well just stay home." If you want to change something, then you need to talk to people, not about people, added Kaeser. One day before the start of the conference, Kaesar then announced he wouldn't be attending after all. 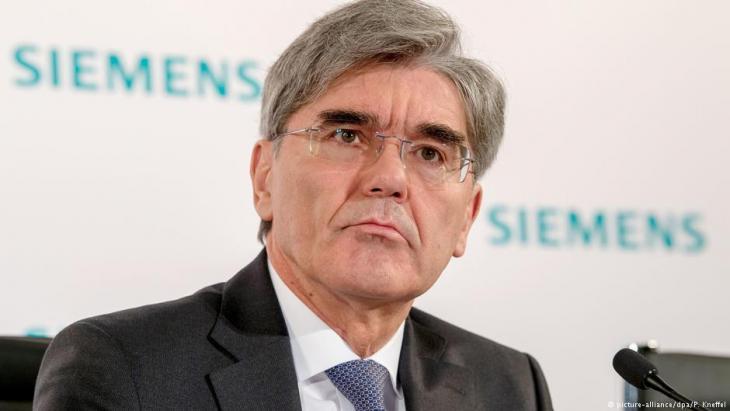 A major market for Siemens: Saudi Arabia is worth billions to Siemens, where the company is currently involved in two major projects: the construction of a gas-fired power plant and the new metro in the capital Riyadh. Following international outrage over the alleged murder of journalist Jamal Khashoggi, Siemens CEO Joe Kaeser cancelled his visit to the economic forum in Saudi Arabia

How do his words and his manoeuvring jive with the matter of the bone saw? When it comes to language annihilation and moral neglect, the head of the DAX company Siemens is turning out to be a model student of Donald Trump.

In May, Kaeser explained in an interview with the American television broadcaster CNN that he respects "the primacy of the political system ". He meant the politics of Donald Trump, or more specifically the president's nixing of the Iran nuclear deal and the demand that companies halt their business with Tehran. Kaeser was one of the first to obey. As though the Siemens boss wanted to stage the "Man of Straw" by Heinrich Mann once again, with himself in the leading role. In the novel, the entrepreneur Diederich Hessling strives to copy his role model Kaiser Wilhelm to the point of caricature, without wasting a thought on where the Wilhelmine imperialism could lead.

In the opinion of the respected historian Christopher Clark, Wilhelm II is the only historical leader to share extensive character similarities with the incumbent American president.

Kaeser appears to hope that he'll be rewarded for his subjugation: with good investment conditions in the U.S., in Saudi Arabia and as a result, that the U.S. company General Electric will give him precedence in the project to build a new electricity network in Iraq. Will the gamble pay off?

Were Trump to be stopped now, were Mohammed bin Salman to be deposed and punished, the resulting political damage assessments would certainly be very long. But the reality is likely to be much worse: that they remain in power and inflict even greater damage.

Following the attacks of 11 September 2001, in which 15 Saudis were involved, there was talk in the United States of the big crisis in U.S.-Saudi relations. It was said that dependency on a nation that doesn't just export oil, but also terror, must be revised. Media criticism was vociferous and Michael Moore filmed "Fahrenheit 09/11".

But the relationship remained intact. And what are 15 Saudis with a bone saw compared to 15 Saudis flying planes into the World Trade Center and the Pentagon? Nothing at all!

Stefan Buchen is a television journalist with the ARD magazine programme Panorama.

Home
Print
Newsletter
More on this topic
Middle East expert Guido Steinberg: No one wants conflict with Saudi ArabiaWestern diplomacy in crisis: What to do about Khashoggi?Khashoggi on MbS: "A believer in himself. He doesn't believe in anybody else"
Related Topics
Arms trade, Donald Trump, King Salman bin Abdulaziz al-Saud of Saudi Arabia, Mohammed bin Salman, U.S. policy in the Middle East
All Topics

In Doha, Arabs from Morocco, Tunisia, Egypt and Algeria are gathering to celebrate the first ever FIFA World Cup to be held on Arab soil. The criticism from Europe? Over the top, ... END_OF_DOCUMENT_TOKEN_TO_BE_REPLACED

Canan Topcu came from Turkey to Germany as a child. In her essay, she describes how bothered she was by the racism she encountered in her country of origin when she travelled ... END_OF_DOCUMENT_TOKEN_TO_BE_REPLACED

All organisers use major sporting events like this year’s FIFA World Cup in Qatar primarily to advertise their country and promote a slick public image. This is not something we ... END_OF_DOCUMENT_TOKEN_TO_BE_REPLACED

Lamya Kaddor, MP for Germany’s Green Party, visited Qatar with a group of parliamentarians. In interview with Claudia Mende, she advocates a differentiated picture and urges that ... END_OF_DOCUMENT_TOKEN_TO_BE_REPLACED

COP27 in Sharm el-Sheikh is turning into a PR disaster for Egypt’s military regime. Instead of praise for the host, the news is full of solidarity for imprisoned activist Alaa ... END_OF_DOCUMENT_TOKEN_TO_BE_REPLACED
Author:
Stefan Buchen
Date:
Mail:
Send via mail

END_OF_DOCUMENT_TOKEN_TO_BE_REPLACED
Social media
and networks
Subscribe to our
newsletter