Music Scene in Beirut
Nostalgic about the War

"Everyone longs to return to his childhood, and my childhood simply took place during the war", says Mazen Kerbaj, a pioneer of free improvised music in Beirut. Thomas Burkhalter takes a look at how years of war have influenced the sound of Lebanese music

​​The Lebanese musician Mazen Kerbaj is regarded as a pioneer of free improvised music in Beirut. He recently launched a new weblog – mazenkerblog.blogspot.com.

"Thank you that I can hear the war again," he remarks cynically on his blog. Kerbaj was born in 1975, during the Lebanese civil war. He is nostalgic about that time, he tells me in an interview. "Everyone longs to return to his childhood, and my childhood simply took place during the war. I didn't know anything else."

Kerbaj is also known for his comics and caricatures – on his blog he now posts samples of his art every hour. At the moment he is playing his trumpet in Europe. He was actually supposed to fly to the US in the next few days, but after the bombing of the airport that probably won't work out.

Kerbaj's solo appearances have invariably impressed me. He uses every conceivable playing technique: he plays with and without a mouthpiece, sometimes he blows through a long tube that he wraps around his stomach, often he takes his trumpet vertically between his legs, puts a tin can on the bell, and alternates between blowing, sucking, and percussive sounds.

On his solo CD "brt vrt zrt krt t," we hear his trumpet hissing, grunting, and gurgling, in the highest and lowest registers, often in several voices, always rhythmically precise. The trumpet sound in the piece "Tagadagadaga" is reminiscent of machine gun volleys. In "Taga of Daga" it sounds like the clatter of helicopter rotors. 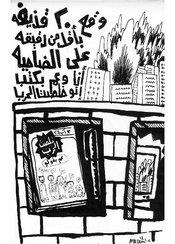 "Although silence is synonymous with peace, it was always ominous as well – waiting for the next hail of bombs," says Mazen Kerbaj

​​It was his friend, the Austrian trumpeter Franz Hautzinger, who called Kerbaj's attention to the similarities between his sounds and war machines. Since then, Kerbaj has been pondering over how the sounds of war from his childhood are connected to his music today.

Earlier, he wanted to rebel against Lebanese high society, the conservatory, and the classical school of trumpet playing. Now he realizes that it was not only this dissociation that attracted him to John Coltrane, Evan Parker, to Peter Brötzmann's album "Machine Gun – Automatic Gun for Fast and Continuous Firing," and to other musicians from the free jazz and free improvised music scene.

"I am probably imitating the sounds of my childhood on the trumpet. I also have a special relationship to silence. Although silence is synonymous with peace, it was always ominous as well – waiting for the next hail of bombs."

Healing the wounds of war

The war is also omnipresent in Rana Eid's music. Two years ago, she compiled a kind of monologue of sounds of Beirut on CD. When I talk to her, she sounds upset, almost hysterical.

Eid composes the soundtracks for almost all the important Lebanese films. As the skies rumbled during the Israeli invasion in 1982 and bombs fell on West Beirut, Eid, still a child, put a Walkman headset over her ears and listened to music – the majestic ornamentations of the Egyptian diva Umm Kulthum, the soothing songs of the Lebanese vocalist Fairuz, and the politicized musical theater of her son, Ziad Rahbani. Eid's father was a Communist. Tall, bearded, unkempt men used to sit in their living room and argue heatedly, she recalls.

At first, she was afraid, then she became increasingly immersed in her father's world and memorized the political songs of Marcel Khalife, Ahmad Kabour, and Khaled el Haber.

After the war, she didn't want to listen to any more music. During her studies at the university, however, she began to talk to friends, acquaintances, and strangers about wartime memories. She recorded these conversations.

"I am fascinated by the way the tension and voice register change when a person speaks," she explained during an interview. Later, Eid began to record the sounds of her city.

They are the sounds that I recall now, too – pedestrians calling out to a taxi driver where they want to go. Sometimes resolute and loud, sometimes hesitant, reserved: Achrafieh, Basta, Mathaf, Tabaris. Screeching tires on Beirut's asphalt, honking sounds from every direction, sputtering Mercedes engines.

The humming of the many electrical wires that kept me awake during my first few days in Beirut. The ringing of the church bells, the call of the muezzin to prayer. The sound of hammering and drilling from the rapidly growing city center that spread over half the city. And much more.

Eid wanted to develop a sound archive of her city, but unfortunately nothing came of it. Soon she was working with increasing success as a sound designer for film and video. She is trying to gradually heal the wounds of war in her work.

"I don't know how I can stand this raging in the sky," she says now on the telephone. "All the memories are coming back. I want to get away from here, but at the same time I want to stay. My family is here. I don't know what I should do."

I am thinking about Raed Yassine. Last week I talked to him for an entire day and exchanged music with him. In his 23-minute work "Featuring Hind Rostan," he has packaged political speeches, war sounds, commercials, radio jingles, and television tunes from the Lebanese civil war into a sound collage.

These are aural recollections which many Lebanese wanted to erase from their memories but are still very fresh in their minds. It was very difficult to get these archive tapes at all, said Yassine. "Even the radio and television stations don't like to look back on that time."

​​In the piece you hear the Christian military leaders Samir Geagea and Bachir Gemayel speaking, sometimes interrupted by the Communist leader Georges Hawi, who was murdered last year, or the Druze clan leader, Walid Jumblatt. Interspersed regularly are snatches of radio broadcasts, jazz-rock, or synthesizer pop that was played in Beirut in those days, despite the war. Discos and clubs were flourishing then; the party community wanted to dance, to forget.

Commercials from various radio stations enrich the collage. They form an absurd contrast to the everyday life of Lebanese soldiers and civilians at that time. "I rarely have time to sit around," says an American voice, "and I rarely have time for a proper meal. That's why I eat Snickers. I can't live without Snickers."

There were supposedly around 200 radio stations during the civil war. Every community, every militia had its own station that continuously informed its listeners about who had made what strategic moves, who had been killed, which streets were open to traffic at the moment, and which were not. After the war, television became more important.

"Hi Tom, we're having a bloodbath again here," Gharo Gdanian of the death metal band Weeping Willow writes me via SMS. "I'm at home, furiously laying into my guitar. Are you alright? Hoping for better times." Even today, he still dreams about war sometimes. He watches horror films; he doesn't like happy ends, Gdanian told me a week ago.

"My music plays on the dark side of life; the song 'Remains of a Bloodbath' is about Beirut's desolate past. I've seen a lot during my lifetime." Weeping Willow is – or was? – the extreme, loud wing of an emerging subcultural music scene in Beirut.

Ziyad Sahhab could perhaps be at the other end of the scale. I just analyzed the piece "Ma ana bahibb ar-Rawwaq" with him. An Arabic 'ūd, an Arabic qanūn, a violin, guitar, and electric bass play this wonderfully embellished, yet gently evolving melody.

In his deep, Leonard Cohen voice, Sahhab sings that he would like to learn from mistakes and develop further in peace. He is trying to find his personal artistic direction. Like many musicians here:

​​Zeid Hamdan, with his trip-hop group Soap Kills and his post-rock band The New Government; Hayaf Yassine, with his homemade santūr, on which he plays early Arab music; Rayess Bek, who raps about the fact that the different religious communities in Lebanon still view each other with suspicion; pianist Joelle Khoury, who regularly invited international composers and musicians to workshops and two weeks ago played compositions by John Cage with an orchestra consisting of classical musicians, free jazzers, and jazz musicians.

After the concert, she was overjoyed and said that these were the rare moments that had been worth fighting so long for. All these musicians – and several others – launched their own CD labels, networked internationally, and decided to remain in Lebanon and build something.

They were in good company. The civil society grew larger; independent media platforms such as indymedia Beirut, the gay and lesbian NGO Helem, conservation organizations, and many others addressed taboos and new subjects. They wanted to proceed step-by-step, but no longer believed in far-reaching political solutions.

Although they participated in the mass demonstrations that led to the formation of a new government last spring, they did not trust the politicians who had already been in power during the war and had been conciliatory recently. Many regarded the "National Dialogue" that had brought all the country's political clan leaders, including Nasrallah, to the conference table again and again during the past few months as theater.

It appears that they were right. Did the reforms move too slowly? Is Lebanon being punished for that now? Or could this war not have been prevented anyway?

This active scene reached ever-broader sections of the population. They were on the verge of changing this country. The rather dark intellectual film "A Perfect Day," directed by Joana Hadjithomas and Khalil Joreige, was shown in multiplex cinemas at Beirut's large shopping malls, for example – in the heart of the Lebanese consumer society that is so annoying to many intellectuals and artists.

"The Lebanese suppress their memories of the civil war with extreme consumption," writes Samir Khalaf, sociologist and professor at the American University in Beirut. The young artists addressed these and other taboo subjects with increasing frequency. In this way, they succeeded in building the first bridges to the population. Now these bridges – like those made of stone – have been brutally bombed to bits for the time being.

Meanwhile, Mazen Kerbaj has switched over completely to war music. On his blog he calls the Israeli pilots "sound artists," and he has put his MP3 recording of a night of bombing on the Internet.

Trip-Hop from Beirut - Soap Kills
A Band That Sets Itself Apart from Commercial Arab Pop
The Lebanese electro-acoustic band "Soap Kills" is among the current stars of a music scene that shuttles back and forth between Beirut and Paris, prefers to sing in Arabic, and feels at home in Europe. By Christina Förch in Beirut

Lebanon
Arabic Rock Music of International Caliber
Rock music in Lebanon reached a low point in 1997 after the suicide of one of its fans. One of the most promising young bands then broke up. It is now celebrating a brilliant fresh start under the name Blend. By Christina Förch

END_OF_DOCUMENT_TOKEN_TO_BE_REPLACED
Social media
and networks
Subscribe to our
newsletter