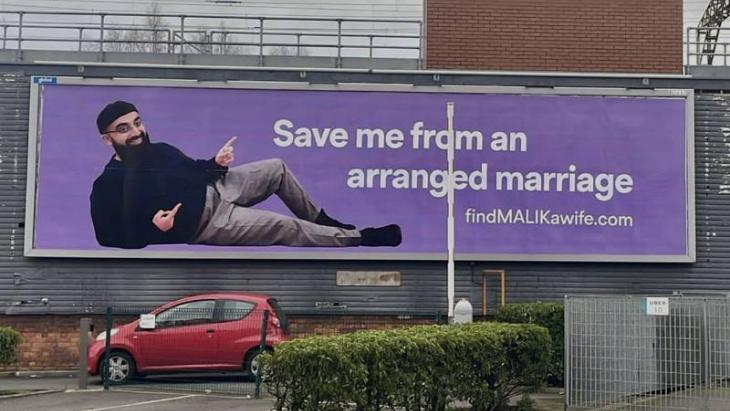 Muhammad Malik, 29, has resorted to a novel method in his search for a wife, making his prospective partners aware of his availability with adverts on billboards in the UK cities of London and Birmingham. The billboards show a picture of a relaxed Mr Malik and read: "Save me from an arranged marriage".

He said he is not against the idea of an arranged marriage, but would prefer to try to "find someone on my own first". Up to now, the search has proved fruitless for the London-based bank consultant. He hopes his specially set-up website – findmalikawife.com – will change his luck.

Since putting up the adverts on Saturday, Mr Malik says he has had hundreds of interested messages.

"I haven't had the time to look through yet," he said. "I need to set some time aside – I hadn't thought this part through."

Mr Malik said he had tried a number of ways to meet women before taking out the adverts.

"I'm Pakistani Desi," he said, "so the first thing we're told about is the power of the aunties." But that method "didn't work out".

Then, there were dating apps and a few dating events, but he said they left him feeling "quite awkward". Finally, a friend suggested he should advertise himself – literally.

Mr Malik explained: "I thought, why not – what's the worst that can happen?"

The billboards, set to remain up until 14 January, have the backing of his family, with his parents "down from the beginning", although he confessed, "I had to convince my mum a bit."    (The National)

END_OF_DOCUMENT_TOKEN_TO_BE_REPLACED
Social media
and networks
Subscribe to our
newsletter