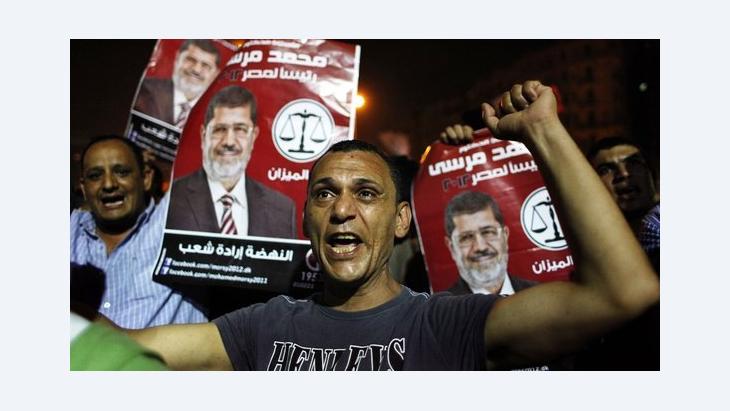 ''25 TV Stations Are Working against Us''

Unfair media coverage, hostile opposition, and violent demonstrators: Many Muslim Brothers see themselves as being wrongly attacked. A visit to a party office of the Islamists in Cairo. By Markus Symank

If it could be said that a liberal wing of the Muslim Brotherhood exists, then Ahmed Abdel Futuh is a member of it. "We need more democracy within our organization," demands the young politician from the Freedom and Justice Party (FJP), the political wing of the Egyptian Muslim Brotherhood. Grassroots members have to be given a greater say in party affairs, asserts Abdel Futuh. "Egypt is changing and we have to change too if we want to keep pace."

The accusation that the Muslim Brotherhood suffers from a lack of democracy is nothing new. However, it is rare to hear the complaint coming from a member of the organization. In other respects, as well, Abdel Futuh hardly comes across as a conventional Muslim Brother. He accepts the criticism of the government, which has been going on unabated for weeks. The "rage of the people" is understandable, considering the high expectations after the revolution.

But then he says something that sounds somewhat less conciliatory. "Unfortunately, many of the demonstrators listen to the propaganda of the opposition and the media, and these are controlled by supporters of the former regime and by forces abroad."

Within the Muslim Brotherhood, the viewpoint that the Islamists have been cast in the role of victim – threatened by unfair media coverage, hostile opposition, and violent demonstrators – is widespread. 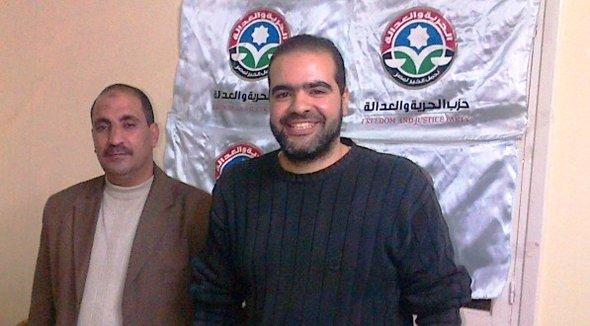 "More obstacles have been laid in Morsi's path than that of any other president." Ahmed Abdel Futuh (right) and Ahmed Ridan from the Egyptian Freedom and Justice Party in Dar al-Salam

​​In the Cairo district of Dar al-Salam, in which Abdel Futuh works for the FJP, many people share this view. The close to two million inhabitants of the district are for the most part either poor or belong to the lower middle class. Almost all of them are Muslims. There is hardly another district in Cairo in which more people voted in favour of the new, religiously biased constitution two months ago.

The election results, even those from Dar al-Salam, would have been even more convincing if it hadn't been for the media, claims FJP member Mohammed Hamada Hassan. The privately owned newspapers and television stations spread lies around the clock, he complains.

"The opposition had more than 25 TV stations on its side. We have three. And that we still won the vote shows that we are on the right path," says Hassan, before reaching into his long robe for a brochure featuring the friendly, smiling face of Mohamed Morsi. The title of the leaflet is written in large letters – "What exactly does the President do?" – and is followed by a list of his achievements so far in his short period of office: Raising pensions, debt relief for farmers, and a ceasefire agreement between Israel and Hamas. In only seven months, according to Hassan, Morsi has achieved more than his predecessor Hosni Mubarak did in 30 years.

The FJP veteran Hassan is two generations older than Abdel Futuh. Words such as "democracy" or "separation of powers" are not part of his everyday vocabulary. Instead, he prefers to talk of the "war" in which the Muslim Brotherhood now finds itself. "What we are experiencing in Egypt is not a conflict between the government and the opposition, or even between two different political trends," says the Islamist.

"It is the old struggle between Christianity and Islam, with America on one side, and us on the other. America is doing everything in its power to prevent the rise of Islam in Egypt, but with God's help, we shall prevail." 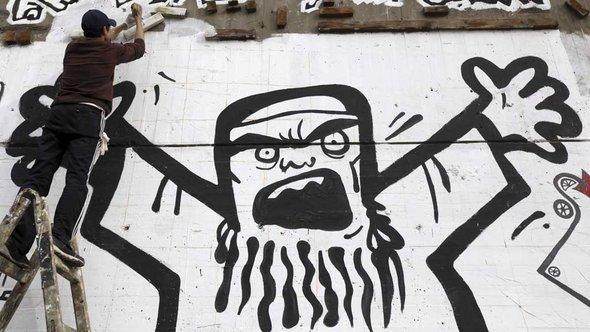 ​​Hassan, a former food vendor, has been active on the frontline of this supposed religious war for the Muslim Brotherhood since his youth. After the popular uprising against the long-standing dictator Hosni Mubarak, he was rewarded with a position in the FJP. The network that he built up as a businessman should now benefit the party in the struggle for votes.

The new job has not made Hassan rich. He admits to getting paid 1500 Egyptian pounds a month, the equivalent of around 170 Euros. The plaster is falling off the walls of his office in the heart of Dar al-Salam and a sole computer is the only piece of modern equipment. "The liberals receive funds from abroad – not us. Otherwise, couldn't we afford more comfortable facilities than this?" comments Hassan.

Double standards of the West

Ahmed Ridan, the chairman of the FJP in Dar al-Salam, also sees the Muslim Brotherhood as the victim of a conspiracy, yet foregoes the martial rhetoric of his older FJP colleague. "The liberals have no respect for democracy," says Ridan. He questions how can they call for the overthrow of Morsi when he was elected by the people. And, he continues, why do they want to declare the constitution invalid, although the majority voted in favour of it?

The politician also denounces the West. They courted the dictator Hosni Mubarak for 30 years. Now that a freely elected civilian president is in power, the West is suddenly insisting on democracy and human rights. "More obstacles have been laid in Morsi's path than that of any other president."

"The people see what we are doing for them"

As a matter of fact, the presence of left-wing and liberal parties in Dar al-Salam is rather modest in comparison to the FJP. The party of the Muslim Brotherhood can rely on the decades-old aid network of the mother organization, which provides soup kitchens and health clinics for the pool. Some 500,000 people have benefited from the services offered by the Muslim Brotherhood in Dar al-Salam, says Ridan. "No other party can boast anything comparable. We are the only ones doing something for the people."

On 25 January this year, on the second anniversary of the Egyptian revolution, the FJP handed out free food to the poor and organized a sporting event for the youth of the district. While demonstrators critical of the government were attempting to destroy state institutions, the FJP was busy developing the "future of the country," asserts Ridan.

Conceived by Israeli journalist and rabbi Elhanan Miller, "People of the Book" is a YouTube project designed to provide information on Judaism in Arabic. Disarming prejudice with ... END_OF_DOCUMENT_TOKEN_TO_BE_REPLACED

While Palestinian political concerns are largely ignored these days, Palestinian band of the moment 47Soul is taking the Middle East's music scene by storm. By Daniel Bax END_OF_DOCUMENT_TOKEN_TO_BE_REPLACED

Just like the rest of the world, the Arab region and Arabic-language media have been watching spellbound over the last few days as U.S. President Donald Trump was voted out of ... END_OF_DOCUMENT_TOKEN_TO_BE_REPLACED

Organised by interfaith NGO Religions for Peace, an international conference in Lindau on Lake Constance is dealing with the peace-building role of women inspired by the faith of ... END_OF_DOCUMENT_TOKEN_TO_BE_REPLACED
Author:
Markus Symank
Date:
Mail:
Send via mail

END_OF_DOCUMENT_TOKEN_TO_BE_REPLACED
Social media
and networks
Subscribe to our
newsletter