Muslim Feminists in Indonesia
The Queens of Islam

Rahima is a Muslim organization that advocates women's equality based on modern and democratic ideas. Instead of traveling from conference to conference, Rahima members prefer to work at the grassroots level. A portrait by Christina Schott

Apart from doing grassroots work, Rahima also publishes its own magazine in order to foster well-founded debates on women and Islam

​​"The queens of Islam used to be a symbol of women's strength. Today they are viewed as a harem, which is a symbol of the oppression and sexual exploitation of women. Many such harems still exist in a figurative sense today – in the home, the education system, and the workplace. And that is exactly what we intend to change."

These emphatic words are spoken by a woman wearing white jeans, fashionable leather sandals, and a headscarf. Farha Ciciek, age 42, is a religious Muslim and the director of Rahima, an Indonesian women's organization that advocates women's equality based on very modern and democratic ideas.

Farha Ciciek and her fellow activists are not about to be silenced, nor do they fit any other clichés of oppressed women in Islam. On the contrary, in their magazine with its fresh and youthful design, they publish articles condemning violence in married life and denouncing polygamy, which is still common in many parts of Indonesia.

Against an overly strict interpretation of the Sharia

They stand up in front of the assembled inhabitants of remote villages and tell the stunned men that they are to blame for the spread of AIDS if they sleep with prostitutes.

The organization vehemently opposes an overly strict interpretation of the Sharia (Islamic law) and campaigns for better representation of women in politics and the media.

"War and terror are usually waged by men. Women tend to be the silent victims of violent conflict," Farha Ciciek explains very calmly. "Wars in the name of some god or deity are an abuse of religion. As a result, true religious values fall by the wayside. By contrast, we advocate humanity." 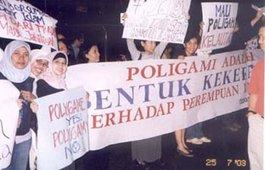 ​​In order to promote humanistic ideals, Rahima works closely with many non-Muslim organizations. For example, the activists are currently working in Aceh with Tim Relawan untuk Kemanusiaan (The Voluntary Team for Humanity), a coalition of various Indonesian non-governmental organizations headed by Father Sandyawan Sumardi, a Catholic priest.

"In a country like Indonesia, pluralism is essential. It is especially important in Aceh that people understand this," says Ciciek, who is the mother of two children.

Rahima has its office in a residential district of southern Jakarta, located in a house with a porch and wicker chairs behind heavy foliage. Posters against violence and oppression of children and women decorate the walls along with surahs from the Koran reminding the reader of women's rights.

Rahima is a relatively new NGO that split off in the year 2000 from an Islamic human rights group, which many of its younger members felt did not place sufficient emphasis on equal rights for women. The name of the "Center for Education and Information on Islam and Women's Rights Issues" is derived from Ar-Rahim, one of the infinite attributes of Allah, symbolizing his divine mercy, compassion and justice.

"We promote our ideas about democracy and equality through Islam. Since religion is the foundation of our society, this is the only way that we can convince people."

In the country with the world's largest Muslim population, over the past few years Rahima members – including a number of men – have gained a widely respected reputation in a number of Indonesian political circles as champions for women's rights in Islam.

Taking the message to the countryside

In contrast to other human rights and women's rights activists who spend most of their time traveling from conference to conference, Rahima works at the grassroots level. Members take their message directly to people in the countryside, to the pesantrens, Islamic boarding schools that are viewed with fear and suspicion by the West, yet are the only opportunity for many children in Indonesia to get a basic education.

Despite initial strong resistance to the organization's efforts – ranging from insults to roadblocks – Rahima has managed to build up a network of pesantrens across Java that endorse its message: equal education for girls and boys, no violence against women in daily life or marriage, equality in community decision-making processes. Current issues and initiatives on the Rahima agenda include forced marriages and talks with homosexual groups.

The activists often rely on quotations from the Koran to refute ingrained ideas held by conservative Muslims. "I was impressed by the fact that Rahima doesn't hide behind lofty speeches, but focuses instead on practical issues, without losing sight of the importance of Islam for people here," says Husein Muhamad, the director of an Islamic school in western Java that now works closely with the organization.

Rahima is part of a new movement among moderate Muslims that many observers see as the only chance of preventing the rise of fundamentalism and avoiding further confrontation with the West.

Farha Ciciek says, "We only live in peace when we practice our religion with tolerance toward other people. The oppression of women has no more to do with Islam than a so-called holy war. We need to remember the forgotten queens of Islam."

Analysis Lies Marcoes-Natsir
The Headscarf: Symbol of Defiance or Symbol of Loyalty?
In Indonesia, the headscarf has gained popularity since the 1980s, but although Indonesia is the world's largest Muslim nation, it is the political sphere that largely defines the meaning of the "hijab". By Lies Marcoes-Natsir

END_OF_DOCUMENT_TOKEN_TO_BE_REPLACED
Social media
and networks
Subscribe to our
newsletter