The German Federal Office for Migration and Refugees study "Muslim Life in Germany" shows that Muslims are better integrated than is commonly assumed. There are still deficits, however, in school education and educational social mobility. Sonja Haug sums up the findings

"No explicit tendency for segregation." - The study targeted Muslims living in Germany and people of other religions from a total of 49 predominantly Muslim countries of origin

​​A nationwide representative study by the German Federal Office for Migration and Refugees, commissioned in 2008 by the German Islam Conference, interviewed people from a large range of predominantly Muslim countries of origin.

The study is based on data from almost 17,000 individuals, providing information on "Muslim Life in Germany". In view of this large group's different contexts of origin, migration motives, lengths of stay and differing success stories, it would be wrong to assess them as a whole.

A projection based on direct questioning on religious beliefs resulted in a figure of some four million Muslims living in Germany. That means Muslims make up around five percent of the population and about a quarter of ethnic minorities living in Germany. The most common religious denomination is Sunni at 74 percent; 13 percent are Alevi and seven percent Shi'a Muslims.

Around 45 percent of the ethnic minority Muslims living in Germany have German nationality. Just under 2.6 million of them originate from Turkey, 550,000 from the southeast European countries Bosnia-Herzegovina, Bulgaria and Albania. The third largest Muslim population in Germany is made up of 330,000 migrants from the Middle East with the countries of origin Lebanon, Iraq, Egypt and Syria. 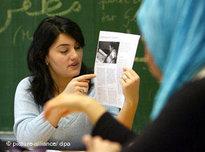 According to the study, 76 percent of Muslims (84 percent of Sunni Muslims) are in favour of introducing Islamic religious education lessons at public schools

​​280,000 of Germany's Muslims come from north Africa, predominantly Morocco. Other regions of origin are central Asia/CIS, Iran, south and southeast Asia and the rest of Africa.

The study also shows that many people originally from these regions are not actually Muslims. For example, almost 40 percent of migrants from Iran state that they do not have a religion. In many cases, large proportions of religious minorities have entered the country from other predominantly Muslim states such as Iraq. Thus, the religious make-up of the countries of origin is not automatically reflected in the religion of the migrants in Germany.

The overwhelming majority of Muslims in Germany are very religious. Religiosity is particularly common among those of Turkish and African origin. However, there are major differences in religious practice in everyday life, such as prayer, celebration of religious festivals, observation of dietary laws and fasting, depending on region of origin and denomination.

Approximately one third of Germany's Muslims attend a mosque regularly, one third rarely and the remaining third never. Despite the strong belief and religious practices, membership of religious associations or communities is relatively low (20 percent).

The overwhelming majority of migrants from Muslim countries of origin (80 percent) have their own income from employment. The unusually high share of self-employed persons, between 20 and 34 percent depending on context of origin, shows that Muslims are willing to maintain their own livelihoods.

Among Muslims from the Middle East and south and southeast Asia (e.g. Pakistan and Afghanistan), however, claiming unemployment or social benefits is not uncommon (32/28 percent). Respondents with very low and very high education levels are particularly likely to be dependent on benefits. On the other hand, the study shows that migrants who have not completed school are for the most part integrated into the labour market. 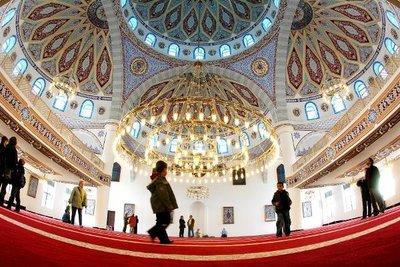 "No man is an island": The percentage of respondents with no everyday contact to Germans and other religious groups is very low in all groups of Muslims

​​In most cases, the study did not find evidence of ethnic or inter-faith segregation among Muslims. The share of individuals in all groups of Muslim origin with no everyday contact to Germans – and no wish for such contact – is no higher than one percent.

No explicit tendency for segregation was found. Social contacts form a basis for cohesion in society. Membership of clubs and associations, for instance, is a resource for integration into the host society. More than half of Muslims are members of a German association or club, often sports clubs or trade unions.

The frequency of social contacts to persons of German ethnic origin in everyday life is relatively high among the respondents, with Muslims from all regions displaying high willingness for more frequent contact.

There are signs of a certain development in terms of integration. Various studies on Turkish migrants have found that they fall behind other nationality groups from the south European countries where Germany recruited "guest workers" in the past or immigrants of German ethnic origin in terms of structural integration, for example school leaving certificates and placing on the labour market.

This study's findings add to this picture, showing that migrants of Turkish origin also do relatively poorly on the indicator of school education in comparison to migrants from other predominantly Muslim countries of origin.

The main cause of this phenomenon is the extremely low educational level among Turkish women of the first immigrant generation. In the course of the generations, however, a clear increase in educational level can be observed, particularly among women. A not insignificant portion of migrants also has the opportunity to use these qualifications on the labour market.

The higher the educational level, the higher the position on the labour market; this phenomenon also applies to Muslim migrants. However, entry into employment does not work in every case. Unemployment statistics show, for example, that Turkish migrants in particular are more frequently out of work. 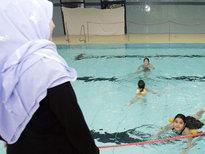 ​​Studies have also found evidence that this even applies when they have the same qualifications as other applicants. Unemployment among migrants is frequently linked to the structural changes in industrial labour, and is thus a consequence of Germany's past recruitment of foreign employees for industrial production almost 50 years ago.

The deliberate recruitment of employees with low educational levels is still affecting the position of those migrants' descendants in terms of education and employment today.

Integration not only of religious groups

The findings on structural integration must occasion more efforts towards integration on the part of the state. However, the integration of Muslims and other migrants from Muslim countries of origin must not be limited merely to the religious target groups, but must continue to be broadly spread.

One important issue here, along with language training through integration courses on a nationwide basis, is integration through education. Despite general improvements in educational levels down the generations, the relatively high rate of school-leavers without qualifications among male migrants from certain predominantly Muslim countries of origin indicates that educational deficits continue to exist among migrants.

For the younger generations, education remains the central field of action in integration policy. The widely discussed approaches to promoting pre-school, school and non-school education for migrants must be put into consistent practice.

All children should have an opportunity to learn German as early as possible. It also makes sense to raise the rate of teaching staff from ethnic minorities and make greater use of school social workers to reduce the burden on subject teachers, improve the learning environment and act against problems related to social class and migration in school life.

Along with increased efforts by the state, parents should be encouraged to take greater responsibility for their children's education. More intensive involvement of the family in pre-school, school and non-school learning could be a suitable means of promoting educational and professional opportunities for children of migrants.

Parents should receive comprehensive information on children's language acquisition and how to promote it, and should be motivated to enable their children an optimum acquisition of German.

One example of this approach is the nationwide integration courses for parents, which specifically deal with subjects such as parenting, education and vocational training alongside their main goal of language teaching.

Another approach is supporting parenting skills and intensifying cooperation between migrant parents and the educational institutions.

Dr. Sonja Haug is a sociologist and lecturer at the University of Mainz and the Schwäbisch-Gmünd University of Education. She is a head of empirical social research at the Federal Office for Migration and Refugees.

The study is available in PDF format on the homepage of the Federal Office for Migration and Refugees.

Integration in Germany
"We Need a Third German Unification!"
Armin Laschet, Minister for Intergenerational Affairs, Family, Women and Integration in the state of North Rhine-Westphalia, discussed the transformation of the migration model of society and the continued lack of advancement opportunities for immigrants in Germany with Eren Güvercin

Interview with Seyla Benhabib
The Guest is Always a Fellow Citizen
The philosopher Şeyla Benhabib has identified a deficit in Germany's democracy. She calls for the right to vote in local elections for non-nationals – and the same legal status for Islam as for other religions. An interview by Deniz Utlu