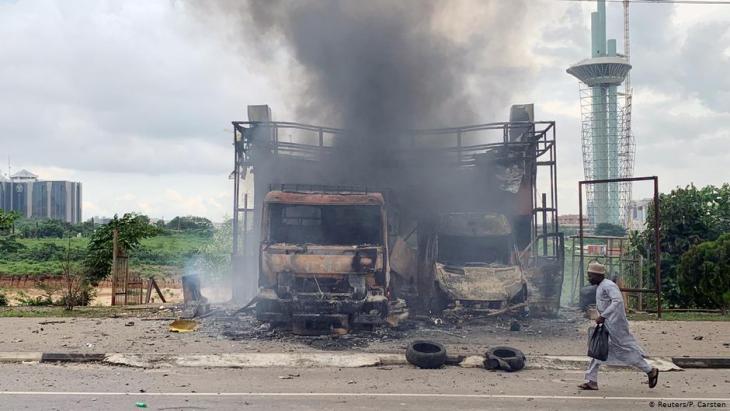 Tensions were high in the capital Abuja after police clamped down on a demonstration.  At least six protesters, a police officer and a journalist were killed during an Islamic Movement in Nigeria (IMN) march last Monday, and the stand-off continued the next day. Police opened fire with live ammunition as well as tear gas as protesters threw petrol bombs at the officers.

The Shia group has vowed to continue the marches until their spiritual leader Ibrahim Zakzaky, who was detained by Nigeria's Sunni authorities in December 2015 on charges including terrorism, is released from prison. Previously, hundreds of Shias had been killed in clashes with security forces in the northern Nigerian city of Zaria.

Zainab Lawal Abdulkadir, a young Shia woman, told the Deutsche Welle that she was on her way to see a doctor because she had been hit by tear gas, but that she would be heading right back to the demonstration. "I hope to die in this struggle; I want a live bullet to enter my body as was meted out to my brothers and sisters yesterday." 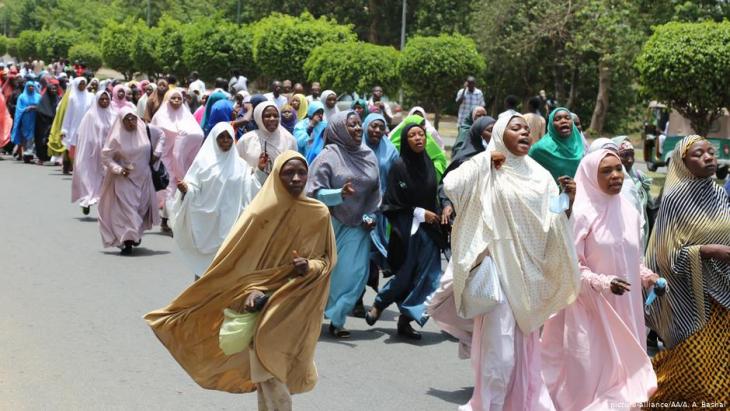 Solidarity with Zakzaky: since the arrest of the Nigerian Shia spiritual leader in December 2015, supporters have been demanding his release – seen here last year. Following a series of violent demonstrations, the Nigerian government has now banned the "Islamic Movement of Nigeria" (IMN). In Nigeria, it is estimated that about half of the nearly 200 million inhabitants are Muslims, most of them Sunnis. Members of the Shia minority often feel oppressed by the Sunnis

Police spokesman Frank Mba told a local TV station the demonstrators "indiscriminately and violently attacked innocent citizens and policeman and then embarked on a spree of destruction to both public and private property " using, in his words, "lethal weapons."

Zakzaky's followers denied the accusations levied against them. Over their 40-year history and despite repeated attacks from the government, the Shias have always remained peaceful, Twitter user Mustyy wrote. "We will never become a second Boko Haram." But touching Zakzaky's life is a "no-go."

Drawing up the battle lines

Both the government and the protesters need to respect the rule of law, argues Mukhtar El-Khasim, an analyst in northern Nigeria. The IMN is acting unlawfully, he told DW, and "the Nigerian government refused to follow the guidelines of the constitution or the verdict of a legal court of law." The analyst was referring to the fact that the government has refused to free Zakzaky even after a federal court dismissed the government's case as unlawful and ordered Zakzaky's release in 2016.

Nigeria shiites have been peaceful & unarmed for over 40yrs of our existence despite incessant attacks on us frm Gvmnts side.

Our Weapon has always been ' Knowledge' hence, will never turns into anthr BH but life of #Zakzaky is a no go area! @segalink @HAHayatu pic.twitter.com/4BsZ7bjBuT

The Nigerian authorities have consistently sent in the military to respond to IMN protests or marches, according to Amnesty International. The IMN is the most widely known Shia group in Nigeria where the Muslim population is, however, mainly Sunni.

Zakzaky founded the IMN in the late 1970s. It was originally a student movement inspired by the Islamic revolution in Iran. Zakzaky convinced fellow students that an Islamic revolution was possible in Nigeria, too. The group's first reported march in Nigeria in 1980 was in support of Iran after a joint U.S.-Canadian operation to save U.S. diplomats trapped in Tehran in 1979.

Over the past years, the country has seen frequent clashes between the security forces and IMN followers during protests and religious processions. Nigeria's government has accused the IMN, which claims to have several million members, of supporting militancy and aiming to undermine the state. Apart from demanding its leader's release, the Shia group claims it only seeks freedom to practice its faith in northern Nigeria.

To defuse the situation, Zakzaky should be released on bail, said retired army major Bashir Shuaibu. The cleric would then be able to address his supporters.

Fatima Musa is one of them – and for her, there is no going back: "I will not leave Abuja without my spiritual leader, I have sacrificed my entire life to free Ibrahim Zakzaky." It doesnʹt look like the protesters are about to give up any time soon.

Organised by interfaith NGO Religions for Peace, an international conference in Lindau on Lake Constance is dealing with the peace-building role of women inspired by the faith of ... END_OF_DOCUMENT_TOKEN_TO_BE_REPLACED

Foreign employees in Lebanon have been working for months without pay. Many have been cast out into the streets by their employers, and others are in forced labour. Their ... END_OF_DOCUMENT_TOKEN_TO_BE_REPLACED

Morocco officially declared itself a country of immigration in 2013, responding to the growing number of immigrants arriving from sub-Saharan Africa. Since then, tens of thousands ... END_OF_DOCUMENT_TOKEN_TO_BE_REPLACED 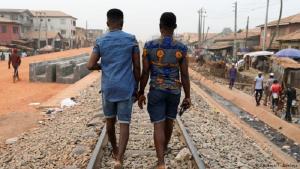 Allegations of homosexuality: a good one and a half years ago, 57 men were temporarily arrested in Lagos. They are still awaiting the court's verdict. ... END_OF_DOCUMENT_TOKEN_TO_BE_REPLACED

Many predominantly Muslim countries have penal laws against "blasphemy", "defamation of religion" and "apostasy". In practice they serve as highly effective weapons to settle ... END_OF_DOCUMENT_TOKEN_TO_BE_REPLACED

This evening, Algeria will play Senegal in Cairo International Stadium in the final of the 2019 Africa Cup of Nations. Joseph Hammond takes a look at how the football championship ... END_OF_DOCUMENT_TOKEN_TO_BE_REPLACED
Author:
Zaharaddeen Umar
Date:
Mail:
Send via mail

END_OF_DOCUMENT_TOKEN_TO_BE_REPLACED
Social media
and networks
Subscribe to our
newsletter