Muslim Professional Footballers during Ramadan
To Fast or Not to Fast?

Ramadan, the Muslim month of fasting, began on 21 August. No exception is made for Muslim professional footballers, who are also obliged to practice abstinence for four weeks. But is it not a bad idea for those involved in competitive sport to observe such a strict fast? By André Tucic 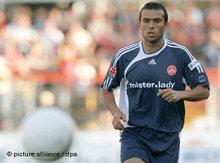 ​​There are five pillars of Islam: the profession of faith, ritual prayer, the compulsory donation of part of one's wealth to the needy, the pilgrimage to Mecca and Ramadan. This period of fasting, the fifth pillar, is the ninth month in the Muslim lunar calendar and is meant to be a time of contemplation, moderation and meditation. Approximately 1.5 billion Muslims worldwide and about 4 million in Germany alone observe the Ramadan pledge.

For the 30 days preceding the Ramadan festival, Muslims are required to practice abstinence from sunrise to sunset. The purpose is to heighten awareness of one's actions and to abstain from eating, drinking and smoking. Naturally, Muslims are also required to refrain from any unacceptable forms of behaviour such as slander, libel, lies and insults of all kind.

​​Ramadan begins with the appearance of the new moon. Because the waxing crescent is initially very difficult to see both with the naked eye and a telescope, mathematical formulae are generally used to determine the correct date. In Germany, the start of Ramadan is announced among others by the German Muslim Scientific Council of New Moons (DIWAN). In order to harmonise the start of Ramadan, the Co-ordination Council of Muslims in Germany (KRM) agreed on a Ramadan calendar in 2008.

In 2009, for example, Ramadan will begin on 21 August and end on 19 September. For Muslims, this is a spiritual period; a time when people come together after dusk to break the fast together. The thirty days of Ramadan conclude with a three-day festival known as Eid ul Fitr. Before the end of Ramadan, Muslims are obliged to give special alms to the needy known as Zakat ul Fitr.

Generous exceptions to the rule

The elderly, mentally handicapped, soldiers, people who engage in strenuous physical labour and children under the age of 15 are an exception to the rule. The sick, travellers, pregnant women, women who have just given birth, nursing mothers and women menstruating during the month of Ramadan are permitted to fast at a later date. 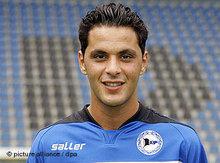 Pulling out all the stops during Ramadan: German-Moroccan footballer Abdelaziz Ahanfouf during his 2006-2007 season for Arminia Bielefeld

​​Professional sportsmen and women, on the other hand, are supposed to observe the fast. This also applies to Muslim football players in the Bundesliga. Mesut Özil, a member of the German football team who also plays for Werder Bremen, does not observe the fast, the reason being that he tried it while playing in the German under 21 team and suffered from bouts of faintness. "I felt weak and had headaches," says Özil.

Frank Ribéry, the French player who converted to Islam and plays for Bayern Munich, observes a fast, but not a strict one: "I fast on my days off. But when I have a match, I don't."

Serdar Tasci, who was born in Turkey, plays for both VfB Stuttgart and is a member of the German team, adopts the same strategy as Ribéry: "To avoid any risks, I amend my fast to suit the training schedule," he says. Sami Khedira, another VfB player, whose father is Tunisian, does the same.

Halil Altintop of Schalke 04, who also plays for Turkey, adopts a much more categorical stance on Ramadan. Says Altintop: "The period of fasting is very important for me, but as a professional sportsman, I have to have a balanced diet and drink enough liquids. If I don't, I run out of steam."

"After all, I want to go to paradise"

There are, of course, players in the Bundesliga who observe a strict fast. One of them is Jawhar Mnari, a Tunisian member of the 1. FC Nuremberg team. "It's a slightly different rhythm, but that is not a problem for me. I get up at 3.30 a.m. and eat and drink a lot," he says.

Halil Altintop: "The period of fasting is very important for me, but as a professional sportsman, I have to have a balanced diet and drink enough liquids"

​​Abdelaziz Ahanfouf, a Moroccan player who is not affiliated to any club, on the other hand, seems to be able to pull out all the stops during Ramadan: he managed a hat trick, the only one of his career, during the month of fasting. "The first few days are tough. But once you have found your rhythm it's ok," he explains. The top priority is "faith and the pledge to adhere to the fast. After all, I want to go to paradise," he adds.

Burhan Kisici, secretary-general of the Muslim Council of Germany, agrees with Mnari and Ahanfouf: "Competitive sports and Ramadan are compatible. You have to prepare for it, eat well and take breaks." Kisici considers it a good thing when athletes observe the fast: "There are enough Muslim athletes who observe Ramadan and still manage to be on top form."

What do the experts say?

Training after dusk: Werner Lorant has worked as a coach in both Turkey and Iran

​​But what do the experts have to say about the compatibility of Ramadan and competitive sport? "Fluids are a very important factor when it comes to competitive sport. Those who don't drink enough water, diminish their performance," says sports scientists and nutritionist Hans Braun, who works at the German Research Centre for Competitive Sport at the Sports University of Cologne. Equally important is the consumption of carbohydrates.

"It is important to eat carbohydrates, i.e. pasta, rice, or potatoes, two to three hours before training. Moreover, evening meals should be light and easily digestible," says Braun.

During Ramadan, competitive sportsmen and women can lose muscle mass and two to three kilos in weight. "That being said, I am not aware of any long-term damage," says Braun. Nevertheless, fasting can lead to circulatory problems, concentration deficits, muscle cramps and injuries.

This year, Ramadan coincides with what can be the hottest month of the summer. This means that professional athletes observing the fast may have to do without liquids in temperatures of between 30 and 35 degrees. "This can indeed be critical. In such cases, coaches should be careful about what they ask their players to do," says Braun.

Werner Lorant has worked as a coach in both Turkey and Iran. He has always made sure that his players eat right and only asked the members of the Turkish and Iranian team to come to training after dusk. Like Braun, Lorant is not aware of any long-term damage caused by fasting.

Franck Bilal Ribéry
"Always Believe in God"
Franck Ribéry has never been in better shape, and there is a good chance he could be named player of the tournament at Euro 08. Yet things have not always been so rosy for Ribéry, a devout Muslim and former construction worker; not everything in his career has come easy. A portrait by André Tucic

The Integrative Power of Football
Those Who Score, Get to Pray to Allah
It appears as if Islam is always perceived only as a threat. Yet, when soccer players pray to Allah, it is a popularly acclaimed declaration of faith. Nonetheless, the football pitch still has a long way to go to becoming a multicultural paradise, says Claus Leggewie

Jailhouse Fast
Ramadan in Heilbronn Prison
Ramadan, a very special time in the religious calendar for many Muslims, began in early October. Steffen Felger reports on what Muslim prisoners in Heilbronn, Germany, do during Ramadan

Ramadan in Germany
A Time for Spiritual Reflection and Self-Restraint
During Ramadan many worshippers attend special services in Mosques where the Qur'an is read and they also celebrate the so called "Iftar" – when they break their fast at sunset. Arian Fariborz witnessed one Iftar ceremony in the German city of Cologne

END_OF_DOCUMENT_TOKEN_TO_BE_REPLACED
Social media
and networks
Subscribe to our
newsletter