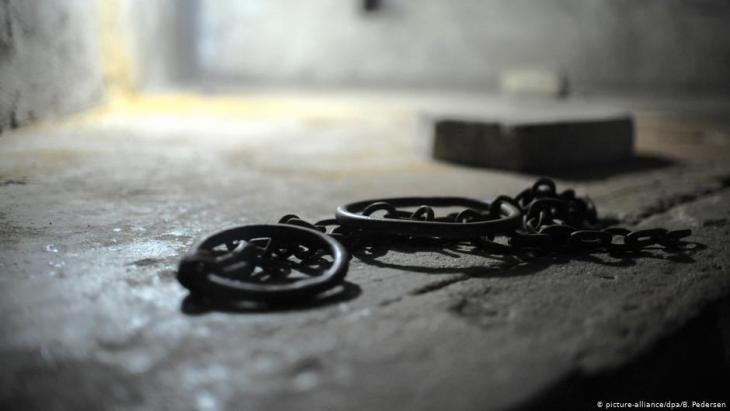 The outpouring of solidarity worldwide following the violent death of George Floyd should prompt us to step back and fundamentally question racist structures and privileges based on injustice – wherever they exist in the world. An essay by Tayfun Guttstadt

The recent global show of solidarity and sympathy with both the historical and ongoing day-to-day suffering of the Black population in the USA was of a magnitude not seen in a long time. Protests broke out in far-flung areas outside the USA and Europe. Displays of solidarity were particularly marked in the Middle East and in Middle Eastern communities in Europe and the USA, where people also see themselves as being victims of racism at the hands of northern Whites, as historically oppressed peoples who are now crying out for justice with the same vehemence and rage as the Blacks.

Foremost among them are Kurds and Palestinians, who have not shrunk from drawing parallels between their own cause and the struggle of Blacks in the USA – mostly claiming that they suffer in equal measure. But it is not only Kurds and Palestinians that feel this way; most people in the Middle East feel that Blacks are not the only victims of racism. This may be true to a certain extent, but it has the effect of distracting from a very real problem: racism within their own communities.

A centuries-long tradition of slavery

For nearly a millennium, Muslims from the Middle East dominated the Mediterranean region and large stretches of Africa and Asia. During that time, they enslaved millions of people, not only but mainly people with black skin. Those sold at slave markets to be shipped all over the world came predominantly from Sub-Saharan Africa. Their enslavement was in line with existing laws that were mostly written and adopted by the ancestors of today's Kurds, Turks and Arabs.

Black people were enslaved as servants, workers and soldiers, with no consideration for their lives, health or state of mind. Black men were often castrated to make them suitable as guards or servants in harems or affluent households.

To this day, Blacks are still at the bottom of the social hierarchy – they are demeaned, have fewer job opportunities, are jokingly referred to as "slaves" or eunuchs, and in times of social unrest such as the Arab Spring, they are often the target of physical violence.

Although slavery has been officially abolished in almost all countries of the Middle East, structural inequalities persist – just as they do in the USA and Europe – preventing Blacks from participating in social life and accumulating wealth. Blacks are almost never seen in leadership positions or on television, and non-Black parents do not want their children to marry Blacks. 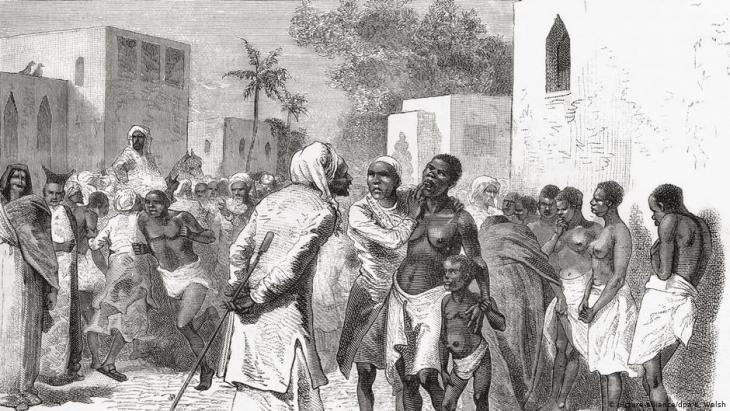 Illustration dating from 1878 depicting a slave market in Zanzibar. Starting in the seventeenth century, the slave trade boomed in East Africa. Around this time, a growing number of traders from Oman settled in Zanzibar, as a result of which the islands of the Zanzibar Archipelago began to play an increasingly important role in the international trade in both goods and slaves. The slave market there became the largest in East Africa

By highlighting individual Blacks who played important roles in the early days of Islam or in the Ottoman Army, possibly even gaining a degree of renown, all this is meant to be forgotten. But it doesn't stop there: the history of Islam is also "whitewashed" or "brownwashed". Just as northern Christians imagine Jesus as a curly-haired blond youth with snow-white skin – a thoroughly implausible notion – early Muslims are all pictured as Arabs, except for Bilal, who is more or less the token Black in Islamic historiography. One of the first converts, Bilal's beautiful voice brought him fame as a muezzin and he has ever after been put forth as the shining example of the supposedly unchanging egalitarianism of Islam.

In some African countries, the oppression and exploitation of the Black population by Muslims has been a subject of intense debate for a long time. According to some activists, the Muslim conquest was every bit as devastating for Africa as European colonialism, if not more so. Nevertheless, the point of this article is not to compare and contrast these historically and structurally very disparate phenomena.

The point instead is to acknowledge the complexity of human history and the omnipresence of oppression, exploitation and discrimination. Even before European imperialism, the world was by no means free of claims to superiority or exclusion and hatred on the basis of skin colour, religion, language or origin.

More and more voices are being raised in Turkey that challenge previous versions of the country's history. These alternative accounts, still largely ignored by official quarters, ... END_OF_DOCUMENT_TOKEN_TO_BE_REPLACED

The Ukraine war is changing the global geopolitical landscape. Ali Khamenei, Iran's most powerful man, is already cosying up to Russia in anticipation of a harsh post-war reality ... END_OF_DOCUMENT_TOKEN_TO_BE_REPLACED

Many Turks are dissatisfied with the international status of their country. At the same time, opinion polls reveal great scepticism among the Turkish population towards the USA. ... END_OF_DOCUMENT_TOKEN_TO_BE_REPLACED

From the Euphrates to the Mekong, dams that ensure one country's water supply risk leaving others parched. But shared water resources can be a source of peace as well as conflict ... END_OF_DOCUMENT_TOKEN_TO_BE_REPLACED

Turkey is turning towards the Turkic nations of Central Asia, intensifying its economic, diplomatic and military relationships with these countries. So what is driving Turkey’s ... END_OF_DOCUMENT_TOKEN_TO_BE_REPLACED

Turkish-Armenian rapprochement kicked off in Moscow in January, after a break of 13 years. This time, focusing on relatively easy fixes such as trade and transportation, both ... END_OF_DOCUMENT_TOKEN_TO_BE_REPLACED
Author:
Tayfun Guttstadt
Date:
Mail:
Send via mail

END_OF_DOCUMENT_TOKEN_TO_BE_REPLACED
Social media
and networks
Subscribe to our
newsletter