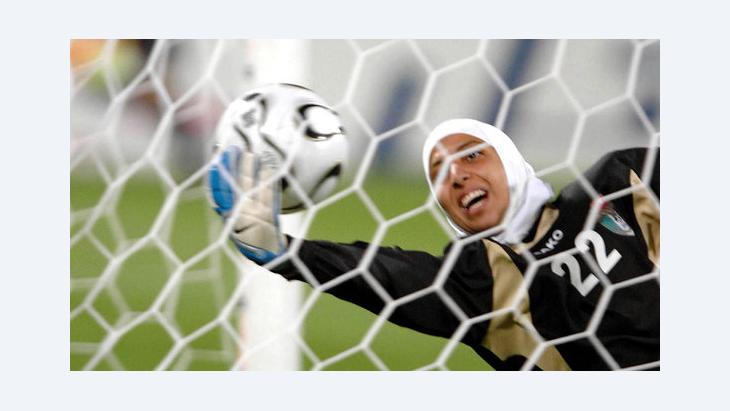 An increasing number of Muslim women are competing in sports. They face numerous challenges that are not an issue for their non-Muslim sisters and have to overcome additional hurdles on their way to sporting success. Marium Sattar takes a look at the status quo and reports on how Muslim women are breaking new ground on the track, on the piste and in the boxing ring

At the first ceremony of its kind, fencer and Olympic hopeful Ibtihaj Muhammad's achievements as a Muslim sportswoman were recognised at the Ambassador Awards. The awards, which were hosted by the Muslim Women's Sport Foundation in London in the first week of May, honoured Muslim women in this field. They are a reminder that Muslim sportswomen have broken new ground in the world of sports and helped change perceptions in society at large.

Although there are more Muslim women competing in sports today than there have been in the past, their legacy is overlooked. Halet Çambel, for example, was the first Muslim woman to compete in the Olympics. She did so in 1936, representing Turkey. Many athletes like her were honoured at the awards, where Muhammad won the International Sportswoman of the Year. However, women's sports participation in some countries is still limited.

The issue of dress

One challenge some Muslim sportswomen have contended with is regulations about athletic dress codes. However, they have also paved the way for other players who want to dress modestly while still competing in the sports they love. In 2007, for example, the International Federation of Association Football (FIFA) placed a ban on wearing the hijab, or headscarf, during matches due to fears that it could lead to choking.

The ban even led to the Iranian women's football team being deemed ineligible for a qualifying match for the Olympics; however, this year, FIFA is planning to overturn that rule in light of new hijabs designed specifically for athletes. The decision will be announced on 2 July after further testing of the new hijabs to ensure their safety. 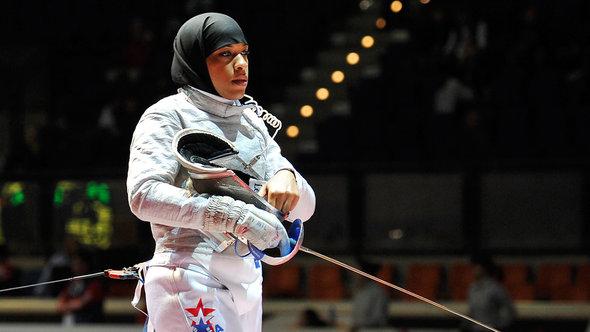 Ibtihaj Muhammad, who competes in a hijab, will fence for the US at the 2012 Olympic Games in London. Says Muhammad: "I want to compete in the Olympics for the United States to prove that nothing should hinder anyone from reaching their goals – not race, religion or gender. I want to set an example that anything is possible with perseverance."

Muhammad says that her faith, which requires women to dress modestly, directed her choice to start fencing, a sport that requires players to cover themselves from head to toe. "Often times, when I'm in competition, I'm the only African American, the only black person, definitely the only Muslim – not only representing the United States but in the competition itself. It can be really difficult…" she said.

Given their diversity, Muslim sportswomen are an inspiration to young women around the world. Yet some young women from Muslim backgrounds still face challenges overcoming cultural restrictions either because their parents believe girls should not become athletes or perhaps simply because they do not have role models. However, these restrictions did not stop Pakistani runner Naseem Hameed, who won the gold medal for her performance at the 100-metre race at the South Asian Games in 2010, making her the fastest woman in South Asia.

As more athletes like Hameed come into the limelight, young women watching them may start to have higher expectations about what they can achieve, especially in sports.

Other Muslim sportswomen have contended with much bigger hurdles. Sadaf Rahimi, a 17-year-old boxer from Afghanistan, is one Ambassador Award nominee who overcame a lack of training facilities and the difficulties of living under the Taliban, which banned women from playing sports. Rahimi, who will be representing Afghanistan at the London 2012 Olympics, shatters stereotypes about Afghan women. Like her peers, she counteracts the misconception that Muslim women cannot play sports, while demonstrating that perseverance can overcome even the toughest hurdles. 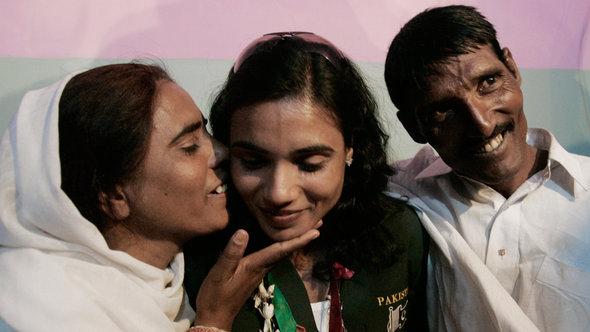 The fastest woman in South Asia: to the obvious delight of her parents, Naseem Hameed of Pakistan won gold in the 100-metre sprint at the South Asian Games in 2010

In another part of the Muslim world, Qatar recently announced that it will send female athletes to the Olympics for the first time. Brunei has also included a female hurdler and 400-metre runner, Maziah Mahusin, in its Olympic team for the first time. The sultanate’s participation in sports heralds a new era, one that is more inclusive of all women and shows that governments are following where women are leading.

Many athletes at the Ambassador Awards said they never expected to excel as they have, a reality that shows young women that they are capable of achieving more than they may think is possible.

At the event, Muhammad reflected on how much her faith and sports have shaped her identity. "I would never have guessed in a million years that my hijab would have led me to fencing, to a sport, but also that I would have grown to love this sport so much. It's so much a part of who I am; I can't even imagine life without it."

Home
Print
Newsletter
More on this topic
Portrait of the Footballer Fatmire Bajramaj: From Refugee to World ChampionMuslim Tennis Player Aravane Rezai: Against All OddsLaleh Seddigh: Donning a Headscarf in the CockpitInternational Ladies' Soccer Team Berlin: ''You Can Play Football Wearing a Headscarf'Germany: When Faith is More Important than SchoolWomen's Sport in Afghanistan: Training in Secret for Fear of Extremists
Related Topics
Football and integration, Muslim women, Sport, Women in the Islamic world
All Topics

In this essay, renowned Lebanese journalist and writer Hazem Saghieh asks whether the Arab Levant, which stretches from Iraq in the east to Egypt in the west, will remain an ... END_OF_DOCUMENT_TOKEN_TO_BE_REPLACED

With his fist bump greeting for a man he previously called a pariah, US President Biden has paved the way for Saudi Crown Prince Mohammed bin Salman's return to the international ... END_OF_DOCUMENT_TOKEN_TO_BE_REPLACED

The murder of a female student at Mansoura University in the Nile Delta has sparked a long overdue debate on femicide in Egypt. Karim El-Gawhary reports from Cairo END_OF_DOCUMENT_TOKEN_TO_BE_REPLACED

When times are tough, the exchange of ideas and perspectives becomes especially important. It takes dialogue. And at Deutsche Welle, we need distributors and cooperative partners ... END_OF_DOCUMENT_TOKEN_TO_BE_REPLACED

Women in the Levant have long used needlework to depict the region’s history, its landscapes, customs and traditions. Intricately embroidered panels, varying in style, colour and ... END_OF_DOCUMENT_TOKEN_TO_BE_REPLACED

A straightforward message emerged from last week’s meeting in the Negev desert of the foreign ministers of four Arab countries, Israel and the United States: Israel is key to the ... END_OF_DOCUMENT_TOKEN_TO_BE_REPLACED
Author:
Marium Sattar
Date:
Mail:
Send via mail

END_OF_DOCUMENT_TOKEN_TO_BE_REPLACED
Social media
and networks
Subscribe to our
newsletter