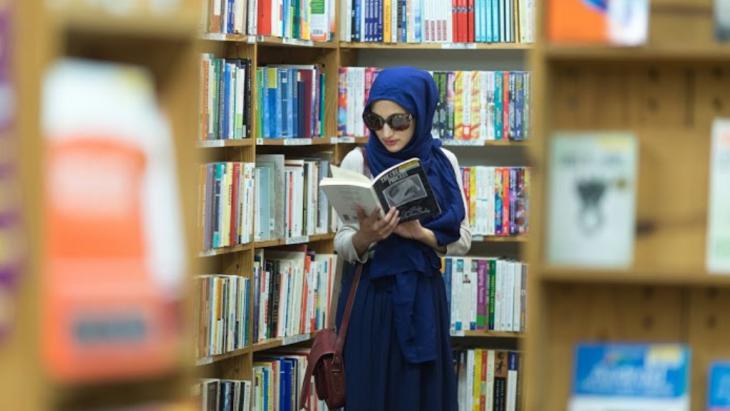 Most people have heard of the term "hipster", which conjures up images of hip young, middle-class urban adults with progressive ideas who are into indie music. But what of the mipster, the "Muslim hipster"? Is it a real or just an imaginary concept? And for young American Muslims, is the label a blessing or a curse? By Joseph Mayton in San Francisco

It's a normal afternoon in San Francisco's Mission District. The usual range of beard-toting, tight pants-wearing techies has gathered in the area's open air park or the myriad cafes that have popped up to serve the recent influx of tech workers who have moved into the city.

The unsuspecting eye might not have noticed a group of five sitting at a café near Dolores Park. The men have neatly trimmed beards, their computers are on the table, and the conversation has turned to some grassroots Indie rock band. The five are all practicing Muslims; one of the women is wearing a veil. These are not your ordinary hipsters, but maybe "mipsters", Muslim hipsters.

Ammar, a 27-year-old Syrian-American programmer, is quick to shy away from the newly minted term used to refer to young Muslim-American professionals who espouse similar notions of the world to "hipsters".

"I don't know if I like that term," he begins. "I don't think we are supposed to like being referred to as a hipster in any way, right? But, if people are calling us mipsters, then that's fine because it at least means we are American." The hint of antagonism towards Muslims that has flourished in the United States over the nearly 15 years since the September 11 attacks in 2001 is still being felt by Muslim-Americans.

For this group and thousands of other young Muslims across the country, the identity of the "mipster" is going mainstream. "I guess you could say we have made it," Ammar continues. "At least they are making fun of us because we are supposedly hipsters who happen to be Muslim. But I don't really like it." 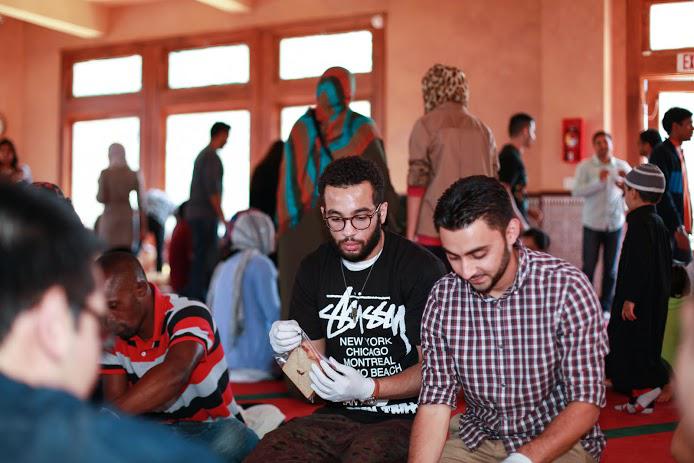 "A mipster has a social mind and yearning for a more just order, a more inclusive community unbounded by stale categories, unwilling to plod blindly along in a world as obsessed with class as it is unmindful of its consequences" says the Facebook group Mipsterz. Pictured here: young Muslim men making bag lunches for homeless people in San Francisco

A "hipster," at least in San Francisco parlance, refers to young, usually tech-savvy or tech workers with tight jeans, well-groomed beards and what locals grimace and refer to as an "aura of superiority".

"A mipster has a social mind and yearning for a more just order, a more inclusive community unbounded by stale categories, unwilling to plod blindly along in a world as obsessed with class as it is unmindful of its consequences," the Facebook group Mipsterz declares in something of a manifesto. "The mipster is a bold, yet humble mind, open to disparate ideas and firm enough in conviction to act, speak out and drop the hammer when the time is right."

For 25-year-old Heba, an American of Egyptian ancestry, the idea is not necessarily a negative one, but she hopes that the conversation can grow into allowing non-Muslim Americans to understand how Muslims live and interact in the country.

"I don't mind the idea of a mipster because it means we are part of something that is truly an American identity," she said. "I enjoy and can get to know non-Muslims because we have similar interests. We like the same bands and we go to the same concerts. It just makes sense."

She goes on to say that her veil, or hijab, has become a fashion accessory to her friends, and she admits that they comment on the many different styles she has in her closet. She believes that the hipster culture is helping many young Muslim women get outside their norm and experience more life, even with the veil.

"I guess for many of us young Muslim women, we still want to be fashionable and be different and that's where my hijab comes into play because I can wear it a number of different ways and the many colours is part of my identity of change," she continues.

"I think I am a much different and more open person since I have been doing the things that make me happy and if that means calling me a hipster or a mipster, I'm okay with that," she added. 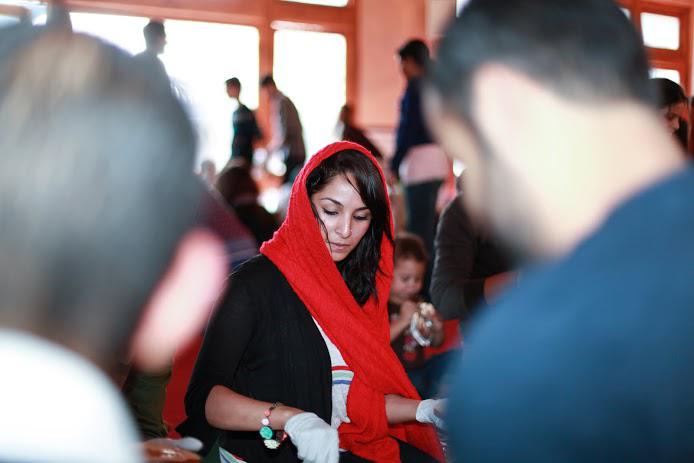 According to Joseph Mayton, "the idea of the mipster has gained traction among Muslim-American communities, who believe the cultural identity around mipsters may be imaginary in concept. But on the ground, Muslims hope it will be a way to express their individuality while also showing their faith." Pictured here: a young Muslim woman making bag lunches for homeless people in San Francisco

The hipster culture has become part of the American urban identity, and in San Francisco, it has its own uber-techie twinge to it. But for Muslims, becoming a part of that culture has largely been a recent affair.

The Mipsterz Facebook group last year published a video of veiled Muslim women riding skateboards around and snapping selfies. That video sparked the initial publicity surrounding the mipster culture and put it firmly on the map.

Commentators have been quick to praise the group. "I applaud Mipsterz for their initiative and creativity," Yazmine Hafiz wrote in the Huffington Post. "The Muslim community needs more innovation, more risks, more boundary-pushing, because the response to this video is a wake-up call to what American Islam really needs — an open mind."

The idea has gained traction among Muslim-American communities, who believe the cultural identity around mipsters may be imaginary in concept. But on the ground, Muslims hope it will be a way to express their individuality while also showing their faith.

Heba nods in agreement. Mariam, the non-veiled woman in the group, jumps in at the last moment, saying she hopes that people will begin to see Muslim-Americans not for their religion, but for their personality and who they are as people.

"I hope that even if this whole mipster thing is just a passing idea that the future for Muslim-Americans can be one where we are considered as people and not by our headscarves or our beards, but by who we are as people, as Americans."

Home
Print
Newsletter
More on this topic
Anti-Muslim sentiment in Canada and the US: Playing on people's fearsMuslims in America: New Wave of Anti-Islamic SentimentSnowden revelations: NSA spied on prominent US Muslims
Related Topics
9/11, Islam and the West, Islam in the U.S., Islamophobia, Muslims in the West
All Topics

Recent efforts to rehabilitate Assad are setting a damaging precedent for accountability, just as the international community is expressing the need to hold Russia to account for ... END_OF_DOCUMENT_TOKEN_TO_BE_REPLACED

Education for girls and women is still possible in Afghanistan, says Reinhard Eroes of the Kinderhilfe Afghanistan initiative. In interview with Elisa Rheinheimer, he talks about ... END_OF_DOCUMENT_TOKEN_TO_BE_REPLACED

Locals in the Middle East have said European critics are showing bias and hypocrisy when they condemn Qatar. Observers agree that Qatar has had to deal with more criticism than ... END_OF_DOCUMENT_TOKEN_TO_BE_REPLACED

All organisers use major sporting events like this year’s FIFA World Cup in Qatar primarily to advertise their country and promote a slick public image. This is not something we ... END_OF_DOCUMENT_TOKEN_TO_BE_REPLACED

Lamya Kaddor, MP for Germany’s Green Party, visited Qatar with a group of parliamentarians. In interview with Claudia Mende, she advocates a differentiated picture and urges that ... END_OF_DOCUMENT_TOKEN_TO_BE_REPLACED

COP27 in Sharm el-Sheikh is turning into a PR disaster for Egypt’s military regime. Instead of praise for the host, the news is full of solidarity for imprisoned activist Alaa ... END_OF_DOCUMENT_TOKEN_TO_BE_REPLACED
Author:
Joseph Mayton
Date:
Mail:
Send via mail

END_OF_DOCUMENT_TOKEN_TO_BE_REPLACED
Social media
and networks
Subscribe to our
newsletter