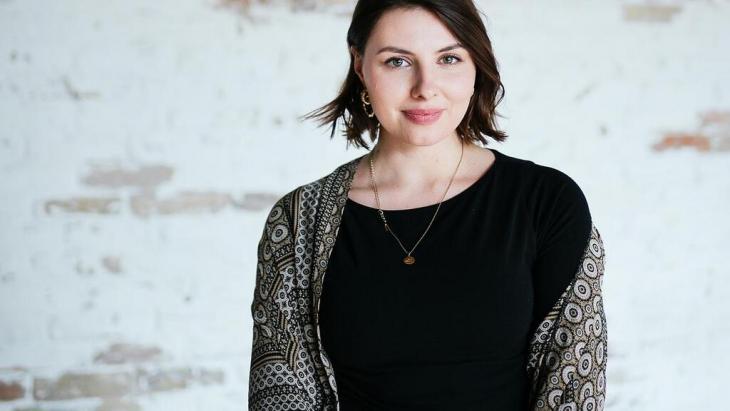 Muslimas on Instagram
The many ways to tie a headscarf

Some German women who’ve converted to Islam are choosing to maintain a public presence on social media such as Instagram, under names such as "Hijabi on Tinder“. In doing so, they’re fending off the cliches and the hate – no matter where it comes from. Julia Ley reports

Namika Sharif, not her real name, began wearing a headscarf at the age of 15. "From that point on, whenever I was in town I would have to hear several stupid comments every day,” she says. "Things like ‘terrorist slut, piss off back to your country’ and other stuff. From that point on, I was frequently spat on and jostled on the train. Once, I was almost beaten up at Dresden central station, people just stood by and some of them even laughed.”

Sharif first encountered Islam at the age of 11, through her mother’s new husband. He was an Arab and mostly celebrated his religion on special holidays – Sharif was fascinated.

She’s now 30, married with her own children – and posts on Instagram about her life as a German convert to Islam.

The desire to be heard

Sharif is just one of many female converts maintaining a confident social media presence for several years. They have all chosen to adopt a religion seen by many Germans as backward and misogynist. They experience rejection and prejudice. Why do these women expose themselves to such negativity? And why do they so deliberately seek out the public arena?

"In my case, it was the desire to have my issues heard, things I experience in my everyday life. Female converts bring a whole host of other issues to the table than for example women whose families have a migration background, or women who’ve migrated here themselves,” says

Toya Zurkuhlen lives in Berlin and converted four years ago. The 27-year-old works as a journalist on the satirical YouTube channel "Datteltaeter" (Date Offenders) and comes from a Catholic family in Hessen. She first met other young Muslims at hip-hop battles.

Zurkuhlen was drawn to the regular rituals that anchor the religion firmly in the everyday. Theologically too, she found Islam more authentic: "I’d always had vague doubts and questions about Jesus as God in human form, and I was never really convinced,” she says. "I’d always thought it didn’t make much sense to me. Essentially I didn’t really believe in it. Islam has some wonderful answers. It just seemed more logical to me.” 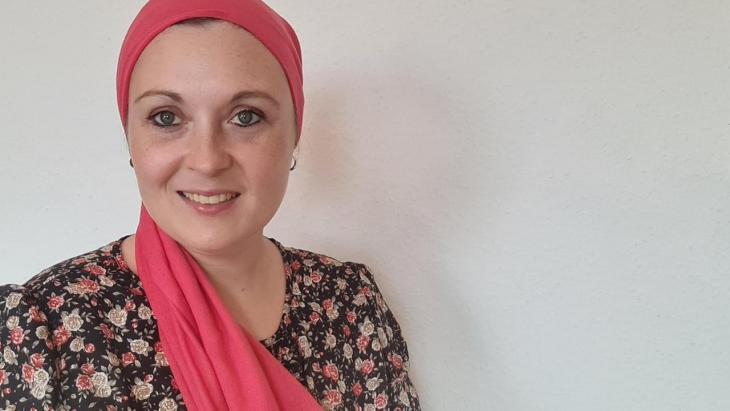 On her Instagram profile "Hijabi on Tinder”, Johanna Wolf posts on what it’s like to be on dating sites like Tinder as a German, Muslim, headscarf-wearing single parent. She is critical, but her complaints are also aimed explicitly at the Muslim community. For example, when Muslim men of foreign heritage explain to her on Tinder that as a divorced woman in her late 30s, she’s really no longer desirable – but that they would consider her as a prospect because of her fair skin. She sees this as blatant ambivalence: the men degrade her, while simultaneously putting her on a pedestal

Rational reasons for the conversion

Thirty-seven-year-old Johanna Wolf lives in Offenbach. She’s a single parent and after much hesitation, decided to convert three years ago. "I was always searching for something,” she says. "And at a relatively young age, when I was still at school, Islam fascinated me with its relatively straightforward logic – be kind to others.”

The "straightforward“ logic of Islam, an image of God that’s easier to understand and more accessible than the Christian trinity – Esra Ozyurek, professor of anthropology at the London School of Economics, is very familiar with such explanations.

She says that in Germany, female converts often emphasise the rational aspect of their decision. This is because they feel a need to convey that they are not crazy or weird: "When I say I’m conducting research on female converts to Islam, many people laugh as though there’s something funny about it. People who aren’t converts themselves then start imagining people with serious problems. Perhaps there are family problems. Or they think: Oh, they fell in love. They imagine a woman that’s fallen so madly in love with a Muslim that she’s taken leave of her senses,” says Ozyurek.

Loss of status a shock

Whereas many Muslims living in Germany grow up experiencing marginalisation because of their religion, for some female converts the loss of status comes as something of a shock. They’re accustomed to belonging, to being taken seriously – and now they’re told they’re oppressed or uneducated. Anthropologist Ozyurek says women react differently to such sudden rejection: some withdraw totally, while others become activists.

Toya Zurkuhlen, Johanna Wolf and Namika Sharif have opted for the latter response. It’s also a way for them to tackle the prejudicial view that all female Muslims are oppressed, they say. 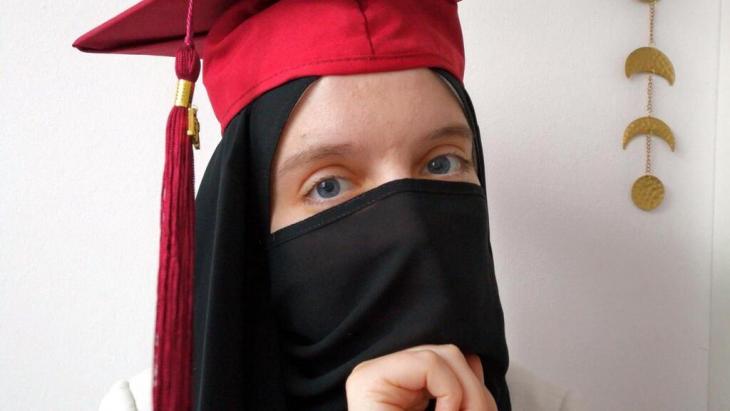 Namika Sharif does not normally wear a face veil, but does not want to be recognised in the photo, nor does she want her real name published. She came to Islam at the age of eleven and started wearing a headscarf at 15. "From that point on, whenever I was in town I would have to hear several stupid comments every day,” she says. "Things like: ‘terrorist slut, piss off back to your country’ and other stuff. From that point on, I was frequently spat on and jostled on the train. Once, I was almost beaten up at Dresden central station, people just stood by and some of them even laughed”

For Zurkuhlen, for example, it is important to stress that she hasn’t surrendered her feminism by converting. Although she doesn’t wear a headscarf, since her conversion she’s stopped wearing revealing clothes – a liberating decision, she says.

Decide for yourself how much you reveal

After all, the refusal to constantly be optimising one’s body, putting it on show and allowing it to be appraised by others "is a revolutionary act in our society. To be saying, as a woman: no, I don’t want to show my body," says Zurkuhlen. "Not that it isn’t totally cool if girls want to show their bodies. It’s more a question of: I make my own decisions about my body and how much I show of it, how much I want to reveal, although I’m being asked to show everything.”

On her Instagram profile "Hijabi on Tinder”, Johanna Wolf posts on what it’s like to be on dating sites like Tinder as a German, Muslim, headscarf-wearing single parent.

She is critical, but her complaints are also aimed explicitly at the Muslim community. For example, when Muslim men of foreign heritage explain to her on Tinder that as a divorced woman in her late 30s, she’s no longer desirable – but that they would consider her as a prospect because of her fair skin.

"That represents a blatant ambivalence: total degradation, while at the same time putting me on a pedestal, I’m being reduced to an object,” Wolf observed. "It’s not about my personality, my character or my individuality. It’s only about me being an accessory for a man to better assimilate himself into the majority society.”

Using privilege to hone the image of female Muslims

As well as plenty of positivity, Johanna Wolf, Toya Zurkuhlen and Namika Sharif are also subjected to messages of hatred on Instagram – from both Islamists, who find them too progressive, but also from right-wingers who view their conversion as a betrayal. After all, in the eyes of right-wing extremists, "good German women“ can’t be Muslims.

Many female converts also feel a responsibility to take a firm stand, believes Johanna Wolf. "Perhaps also because we know that we’re privileged. We’re required to hone the image of female Muslims because we’re carrying less baggage. We experience less anti-Muslim racism or any kind of racism than others. Not that we don’t experience it all, but definitely less,“ she says.

Public visibility also comes with some advantages for the women. It allows them to network with like-minded people and provide mutual support.

After all, Toya Zurkuhlen has realised that in almost all cases, the decision to convert to Islam results in conflicts of identity: "It starts already with the hijab, with the question of whether or not I want to wear a headscarf. What’s that like for a German woman, who maybe doesn’t have a cool aunt who wears a hijab and can offer some guidance? It needs to be completely reinterpreted. We have to build our identity from scratch with very few role models to help us.”

Perhaps this is also the best explanation for the new visibility of female converts on Instagram: there’s a need to find answers to questions concerning their own identity. And at the same time, to stay with both sides in the dialogue: with those who have shaped them, as well as the community whose faith they have adopted.

At least as far as the question of correct headscarf style goes, Johanna Wolf has found an elegant solution: "I come from a region where people still wear traditional costume. I’ve got an outfit at home myself. And to be honest I’ve tried to orientate myself with the costume of my homeland. That way, when I’m wearing the headscarf, it can be totally compatible with my headscarf-wearing Franconian heritage.”

Dalia Hatuqa is an experienced journalist who has reported on the Israeli-Palestinian conflict from Ramallah, Washington DC and Amman. A writer for Time Magazine, Foreign Affairs ... END_OF_DOCUMENT_TOKEN_TO_BE_REPLACED

Since President Abdul Fattah al-Sisi seized power in Egypt in 2013, he has ruled the country with an iron fist. Civil society, opposition and free press struggle to survive. Tens ... END_OF_DOCUMENT_TOKEN_TO_BE_REPLACED

Many Turks are dissatisfied with the international status of their country. At the same time, opinion polls reveal great scepticism among the Turkish population towards the USA. ... END_OF_DOCUMENT_TOKEN_TO_BE_REPLACED

The German government is planning to legalise cannabis before the end of this legislative period. So what does Islam have to say about its consumption? Will changing the law alter ... END_OF_DOCUMENT_TOKEN_TO_BE_REPLACED

In his latest book, Navid Kermani poses questions about God. It feels like no one could have done it better. His writing elicits smiles, doubt and wonder. By Melanie Christina Mohr END_OF_DOCUMENT_TOKEN_TO_BE_REPLACED
Author:
Julia Ley
Date:
Mail:
Send via mail

END_OF_DOCUMENT_TOKEN_TO_BE_REPLACED
Social media
and networks
Subscribe to our
newsletter