Skip to main content
Muslims and Christians in Indonesia

Interreligious Dialogue in a Time of Tension

In Indonesia, political and economic crisis have led to increasing tension between Christians and Muslims. Arian Fariborz has been finding out how churches are reacting to the increasing wave of Islamisation in the country 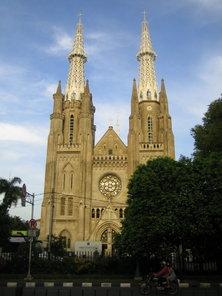 Jakarta's cathedral stands tall, but in Indonesia, Christians have increasingly come under pressure, despite the fact that religious freedom is stipulated in the country's constitution

​​The catholic cathedral in Jakarta is just over the road from the city's largest Muslim place of worship, the Istiqal mosque. The church is often full, with hundreds of Christians gathered in its inner courtyard for prayer. But only a few weeks ago, the scene was not quite so peaceful.

During the Christmas period, the cathedral, like many other churches throughout the country, had to be protected by a large police presence as a result of fears of possible attacks by radical Islamist groups. The fear is not unjustified. Over the last three years, according to the leadership of the Protestant and Catholic churches in the country, at least 108 church and community buildings have been looted, burnt down or been subjected to threats, especially in West Java.

Gomar Gultom is a pastor and a member of the executive of the Protestant Church in Indonesia, the PGI (Persekutuan Gereja Di Indonesia). He believes that there are many reasons for the increase in Islamist violence.

"Some of the Muslims see the presence of Christians or churches in Indonesia in the context of Christianisation," he says. "If we build a church, it means that it will be a centre for Christianisation – this is how some Muslims understand it. And they worry that most of the uneducated Muslims will become Christian."

Many of the attacks, not just on Christians, but also on Muslim sects like the Ahmadis, are the result of ignorance of religious principles, incitement to intolerance and violence, as well as the increasing poverty in the country. Many Christians criticise the Indonesian state for capitulating before religious violence, and not doing enough to uphold the constitutional guarantee of religious freedom.

The security forces are often accused of standing by and doing nothing when they see attacks by Islamist extremists. But, in spite of the conflict, liberal Muslim organisations and committed Christian leaders continue to promote interreligious dialogue. 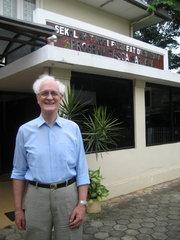 Professor Franz Magnis-Suseno is a leading Jesuit philosopher in Indonesia. He is also one of the country's most prominent advocates for interreligious dialogue

​​"Every year we hold a programme called 'Seminar of Religions," says Dr Erick Barus of the Batak Community in Northern Sumatra. "We invite all the participants – multi-religious – and also we invite scholars from the Muslims."

They discuss how to improve relations between the religions and they have Muslim scholars teaching Christian pastors about Islam, dealing with issues like the meaning of Jihad, or the Muslim attitude towards terrorism. "We need to learn more and more about the other religion," says Barus. "It's important for democracy."

As well as these national initiatives, there are also activities which take place at the local level. In Central Java, for example, Christians visit Muslims to study the principles of Islam together. For a month, they live in "pesantren" – the Muslim boarding schools. Young Muslims and Christians also join together to carry out social and charitable voluntary work in the countryside. And cooperation with liberal Muslim groups and with the "Nadlathul Ulama" – the largest Muslim mass movement in the country – has improved considerably since the nineties.

But Franz Magnis-Suseno, a German Jesuit who is a long-time Jakarta resident, says that, while relations with the Muslim mass movements have improved and there's plenty of dialogue going on, there are still problems. Some liberal Muslims speak out, he says, but ordinary Muslims see them as so far on the margin that they don't have much influence. In general, it's the extremists who are making the running.

"Ever since the fall of President Suharto, extremist groups have been exploiting the country's democratic freedom," he says. "They've been the ones who've been making all the noise in public, while the moderates tend to remain silent."

Interreligious Dialogue
Franz Magnis-Suseno: "Every Religion Is Essentially Humanistic"
The Catholic priest Father Franz Magnis-Suseno has lived for more than 40 years in Indonesia. Almost 30 years ago, he became a citizen of Indonesia, where he has since earned a reputation as a champion of interreligious dialogue. Christina Schott reports

Syncretism in Indonesia
Where Islam Mixes with Old Rituals
Many Indonesian Muslims still practice a rather syncretistic mix of beliefs, combining Islam with other cultural and religious traditions. They are often criticized by Muslim purists for their eclecticism. Christina Schott reports

At nearly 92, Juergen Habermas is still advocating for a robust and transparent civil society. Now Germany's greatest living intellectual has rejected a book award from the United ... END_OF_DOCUMENT_TOKEN_TO_BE_REPLACED

It's no secret that the Baha'i community in Iran is persecuted. Now, a document has come to light that appears to show the extent to which the repression is state-sponsored. By ... END_OF_DOCUMENT_TOKEN_TO_BE_REPLACED

The Pope’s journey to the "land between the rivers": places of terror and a dialogue to promote hope and optimism. His meeting with Shia Grand Ayatollah Ali al-Sistani was a ... END_OF_DOCUMENT_TOKEN_TO_BE_REPLACED

Iraq's Christian minority has dealt with decades of persecution – and many are sceptical about whether a four-day visit by Pope Francis will make a difference. By Cathrin Schaer ... END_OF_DOCUMENT_TOKEN_TO_BE_REPLACED

Morocco is aiming to enshrine Judaism as part of its national identity: the "House of Memory" in Essaouira is one step towards realising that goal. The nation’s Jewish legacy has ... END_OF_DOCUMENT_TOKEN_TO_BE_REPLACED

Last year was one of a kind. 2020 saw the rapid spread of the coronavirus pandemic, putting a stop to the hajj. Though peace in the Middle East remains a pipedream, there was ... END_OF_DOCUMENT_TOKEN_TO_BE_REPLACED
Date:
Mail:
Send via mail

END_OF_DOCUMENT_TOKEN_TO_BE_REPLACED
Social media
and networks
Subscribe to our
newsletter