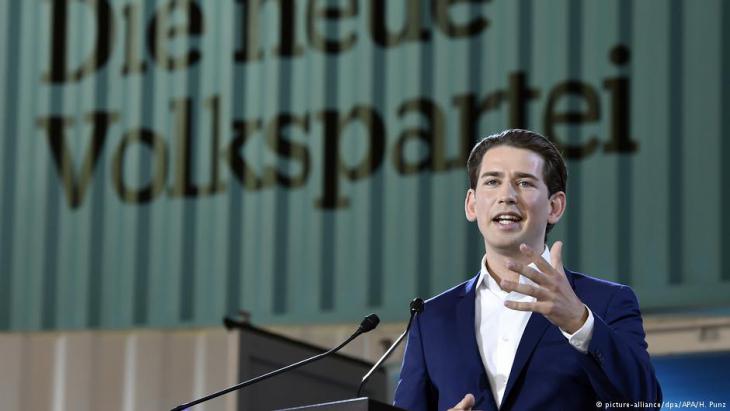 Austria′s election campaign has to date been characterised by cheap propaganda and Islamophobia. Now, just four weeks before people go to the polls, Sebastian Kurz, leader of the conservative OVP, has conceded that coalition with the right-wing FPO is an option. By Farid Hafez

With the campaign for elections to the Austrian National Council in full swing, a gloomy picture is already emerging on the issue of Islam. Since 2008, Austria′s Muslim population, largely made up of low-skilled workers, has felt its views to be adequately represented by the Social Democratic-led grand coalition government.

In 2011, however, saw a youthful Sebastian Kurz enter parliament. Quick to take over leadership of the venerable Christian Democratic OVP, he has since rebranded the tradition-steeped ′black′ party in vibrant turquoise. Initially he was put in charge of led the newly-launched national integration office at the Interior Ministry. Now, as both integration and foreign minister, he is the man responsible for setting the tone when it comes to Austrian policy on Islam.

Yet the hopes placed by many Muslims in a Social Democratic-led government supported by initially liberal overtures from the OVP, which clearly acknowledged Islam to be part of Austria, were soon dashed.

Islam legislation harking back to the Habsburgs

Matters came to a head in 2015, with the introduction of a new Islam law – legislation that had been long in the making. It was passed under a hailstorm of criticism from religious legal experts and cemented the extremely traditional Islam law dating from 1912, when Austria was still ruled by the Habsburg monarchy.

Unlike the 1912 law, which also addressed other church and religious groups, the 2015 law set the course for a new era of legal discrimination aimed specifically at the Islamic community.

And the trend continued. The integration law was passed in 2017. This introduced a ban on face veils, which will come into force on 1 October and stipulates that anyone caught wearing a niqab or full-face veil pay a cash fine. Banning Muslim women from wearing any kind of hair covering was also discussed.

With reference to current regulations, it was argued that female police officers, public prosecutors and judges are not able anyway to wear the so-called ′headscarf′ – hence its omission from the new law.

Jumping on the populist bandwagon

With a clever play on the word ′Kern′, which is the name of the Austrian Chancellor and also means ′essence′, the Green Party campaign slogan ′Im Kern ist Kurz ein Strache′ (′Kurz is essentially a Strache′) appears on posters illustrated with the image of a chameleon aimed at symbolising the uniform political hue of the three chancellor candidates. And on the issue of the Islam question, the Greens definitely have a point. 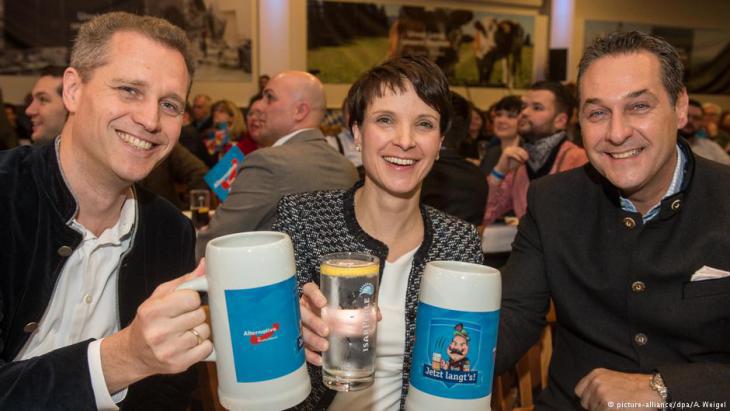 Birds of a feather: FPO leader Heinz-Christian Strache (right) with German AfD politician Frauke Petry at an Ash Wednesday political get-together in Bavaria. With certain sections of the population against the idea of another grand coalition, Austria′s populist right currently seems on track to help form the next Austrian government. The present administration is a coalition of SPO (Social Democrats) and OVP (Austrian People′s Party)

The campaign provides clear evidence of this. Take, for instance, the video message published by the serving chancellor and leader of the Social Democratic Party (SPO), Christian Kern, under the title ′#kernunterwegs am Stammtisch′ (Kern on the road at the regulars′ table), in which the chancellor explains that he aims to listen to those problems "that are of burning interest to people."

He goes on to say that these problems "should be noted" and that one must "listen to the truth." In a bid to win back the older voters who have gone over to the right-wing populist Freedom Party, Kern talks to a female senior citizen and in doing so largely validates racist basic assumptions concerning Islam and Muslims.

And instead of the Chancellor facilitating a more sophisticated view of the "truths" covered in the video, he takes the same line: confirming, for example, the stereotypical image of the misogynist Muslim man. When the senior citizen begins talking about the Karntnerstrasse, a famous street in central Vienna revered as a "shrine", she complains about "people with burkas" and Kern is heard confidently referring to the fact that a ban on the face veil will soon be introduced.

Yes. Quite different tones to those heard in the party political broadcast "Kern liest bose Tweets" (Kern reads nasty Tweets), where he could still be heard explaining to viewers that people out there have different problems to those invented on Twitter. But that video was also about defending the class-struggle election slogan "Hol dir, was dir zusteht" (Take what you′re entitled to). And not about respect for a minority. 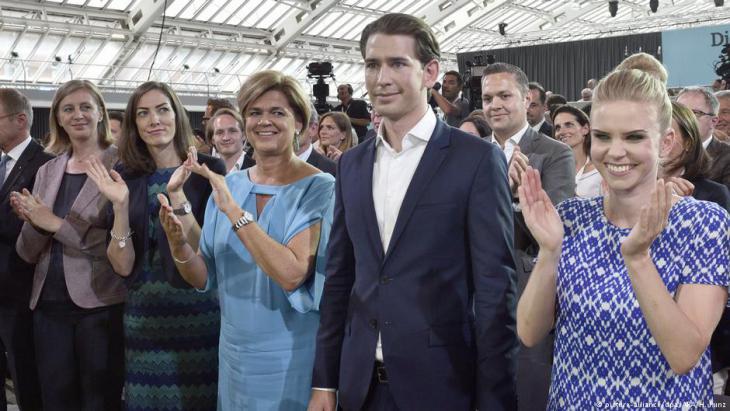 Fishing for right-wing votes: claiming leadership of the Austrian People′s Party in May, Sebastian Kurz has helped his party climb to a 30 percent share of the vote. The 31 year-old is known beyond Austria′s borders for taking a strong position on migration – to the potential detriment of the populist right-wing FPO

Call for more security and a stop on immigration

Brandstetter gave details of a package that he has drawn up of harsher punishments for perpetrators of violent crimes. With a re-definition of criminal culpability in such cases, the justice minister wants to target Islamic associations failing to co-operate with funding audits as envisaged under the revised Islam law.

Then, in July of this year, long-standing party grandee Peter Pilz split from the Greens. Among other things, he gave his intention to tackle political Islam from a left-wing perspective in explanation.

And with the closure of the Balkan route, OVP leader Sebastian Kurz is not only steering a tough course on migration policy. His arguments in favour of an immigration stop may be less crude and more verbally tolerable than those of the right-wing populists, yet he too means the immigration of Muslims.

Even clearer is the campaign message of the Austrian Freedom Party, which has been taking aim at Islam since 2005: the slogan on colossal posters displayed throughout the nation reads: "Islamisation must be stopped". With regard to the Islam issue, the Greens′ campaign poster slogan – slogan ′Im Kern ist Kurz ein Strache′ (′Kurz is essentially a Strache′) – does indeed hit the nail on the head.

Farid Hafez is a political scientist at the University of Salzburg and Senior Research Fellow of Georgetown University′s Bridge Initiative.

Home
Print
Newsletter
More on this topic
Austria′s president and the Islamophobia debate: The courage of one manInterview with the political scientist Farid Hafez: "An expression of institutional Islamophobia"The Islam debate: The dual consciousness of Muslims
Related Topics
Burka, Islam in Europe, Islamophobia, Migration, Muslims in the West, Right-wing populism, The Headscarf Controversy
All Topics

In an innovative move for both religions, European Jews and Muslims have committed to standing up in solidarity more often. The aim is to combat the resurgence of right-wing ... END_OF_DOCUMENT_TOKEN_TO_BE_REPLACED

Why resort to bans on specific religious practices, when we live in an age and a form of society where one can open oneself to permanent processes of education? If piety and self- ... END_OF_DOCUMENT_TOKEN_TO_BE_REPLACED

Europe is shifting to the right. Border security and isolation increasingly dominate the migration policies of the European Union. At a national level, right-wing parties are ... END_OF_DOCUMENT_TOKEN_TO_BE_REPLACED

In France, the publication of a manifesto that calls among other things for the removal of certain verses from the Koran and seeks to pave the way for state intervention in ... END_OF_DOCUMENT_TOKEN_TO_BE_REPLACED

This week, Austria's new centre-right and right-wing coalition published its programme for government. This programme does not view Muslims through the lens of human rights and ... END_OF_DOCUMENT_TOKEN_TO_BE_REPLACED 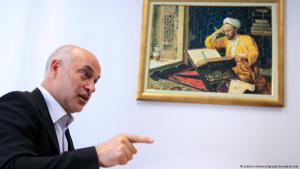 The unwelcome glare of publicity

According to a report in the Austrian weekly ′Falter′, Professor Ednan Aslan is said to have allowed civil servants working for the Austrian Foreign and Integration Minister ... END_OF_DOCUMENT_TOKEN_TO_BE_REPLACED
Author:
Farid Hafez
Date:
Mail:
Send via mail

END_OF_DOCUMENT_TOKEN_TO_BE_REPLACED
Social media
and networks
Subscribe to our
newsletter