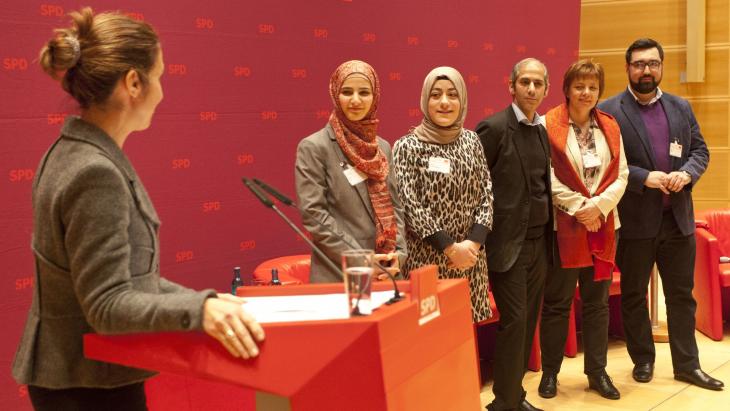 In Germany, both the Greens and the Christian Democrats have had working groups for Muslim members for some time now. In February, the Social Democrats followed suit. Are these new groups really and truly different? Or are Germany's main political parties simply jumping on the diversity trend bandwagon? By Ulrike Hummel

Freedom, equality and justice have always been the maxims of Germany's Social Democrats (SPD). Religion, on the other hand, has not traditionally played a major role within the party. Recently, however, Germany's oldest political party has discovered its sympathies for Muslims. Aydan Ozoguz is the first Muslim woman to join the German federal government and Sawsan Chebli, also of Islamic faith, is the new vice-spokeswoman for Foreign Minister Frank-Walter Steinmeier.

With the establishment of the first nationwide Working Group for Muslims in the SPD in mid-February, the party now hopes to open up to Muslims too. "The basic idea is that Social Democrats of Muslim faith can come together in a forum where they can raise their own issues," says Halide Ozkurt.

Ozkurt is a headscarf-wearing, Turkish-German Muslim party member and a working mother of two. She is standing for the local council elections in the city of Krefeld. "The main objective of the new working group is to foster the political participation of Muslims," says Ozkurt. The group has approximately 50 members; it is hoped that they will act as role models and multipliers, she explains. Their message is: "German, Muslim, Social Democrat".

Ozkurt has been politically active since the age of 19, deciding on the SPD in 2008. "Through my previous work on the advisory committee for foreign citizens, I found that the CDU ignored immigrants' interests to a great extent." She didn't feel that other parties had anything to offer her. Is the idea to bring religious issues into a party that previously had little to do with religion? "We do want to discuss subjects that relate to Islam in the working group. For example questions about halal," says Ozkurt. She can also imagine debating the morning-after pill or embryo screening.

The new working group is explicitly in favour of heterogeneity among Muslim party members, says Atila Ulger, one of the new forum's spokespeople. "Liberal or conservative, Sunni or Shia – everyone is welcome."

The group has yet to work out positions on key issues. What it does already have in writing is the blueprint for a determined campaign of action against every form of Islamophobia. "On the subject of teachers wearing headscarves, I think the working group will take a stand against the ban in place in Germany, adopting the same position as the SPD in the state of North Rhine-Westphalia," says Halide Ozkurt. 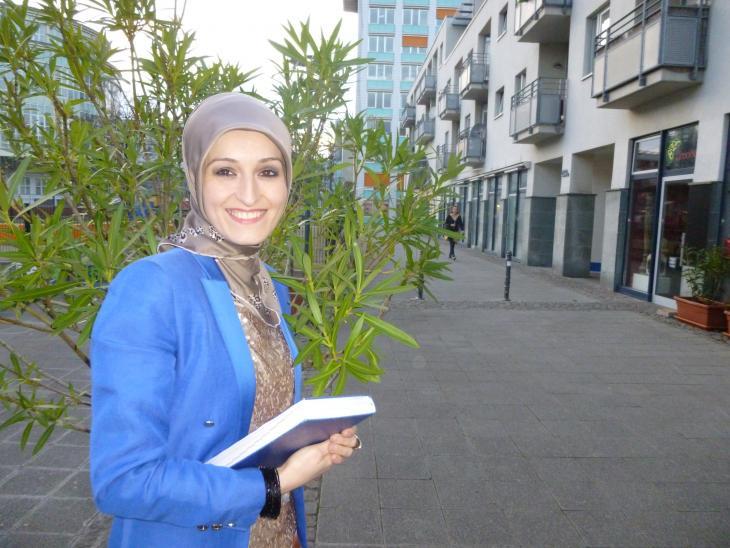 Actively shaping politics: "The basic idea is that Social Democrats of Muslim faith can come together in a forum where they can raise their own issues," says Halide Ozkurt of the Working Group for Muslims in the SPD

Recognition of Islam as a religious community with the same rights as Christian faiths will be a key objective for Muslim SPD members. It is, however, likely that there will be controversial debates on the topic of adoption rights for homosexual couples. On this subject, Ozkurt will only express her personal views: "On the one hand, my work has given me an insight into the fears and difficulties of homosexuals. As a mother, however, I have the child's wellbeing in mind – it's a dilemma."

So-called "diversity" strategies have been a trend for many years. The business world has long recognised the potential of diversity. Now, Germany's political parties are increasingly not only opening up to immigrants, but also focusing on Muslims and their interests.

One of the first working groups for Muslims was initiated by the Greens. The Green Muslims working group was set up in late 2006. In contrast to the newly founded nationwide group in the SPD, the Green Muslims forum is restricted to the state of North Rhine-Westphalia. "The goal was to create a platform where Muslims could network within the party and discuss issues with a greater focus on equal rights for Muslims in Germany," says Hasret Karacuban, the working group's spokeswoman.

The key issues revolve more around religious policy than around immigration debates. There are currently around 15 active members with "very mixed political positions".

The Green Muslims have already formulated joint demands on key issues: "One of our main demands is the recognition of Islam as a religious community. We have been working on this for years," says Hasret Karacuban. Debates on anti-Muslim racism have also been raging in the group of late. The members of the working group are united in their opposition to the current ban on teachers wearing headscarves in North Rhine-Westphalia. In fact, Karacuban adds, this ban ought to be lifted right across the country.

There are controversial debates within the Muslim community on the issue of homosexual couples' right to adoption. The Greens are in favour of such adoption rights. "The working group shares the party's position on this subject," says Karacuban – a standpoint likely to be rejected in conservative Muslim circles.

Unlike the SPD and the Greens with their groups that specifically target Muslims, the conservative CDU has a German-Turkish Forum. It was founded in 1997 with a view to opening up the party to people with migrant backgrounds. The association currently has some 500 registered members across the country, some with and some without migrant backgrounds. "We are not a party committee; we're an independent association financed by membership fees," says Saadettin Tuzun, the vice-chairman in North Rhine-Westphalia.

It does work closely with the CDU on policy, however. The main focus is on immigration and integration issues. "Religion – and Islam in particular – has played less of a role so far," says 42-year-old Tuzun. The members of the German-Turkish Forum identify above all with family-oriented values, he explains. The agenda ranges from education to demographic change and economic issues. "We do discuss religious topics in one of our working groups," says Tuzun. 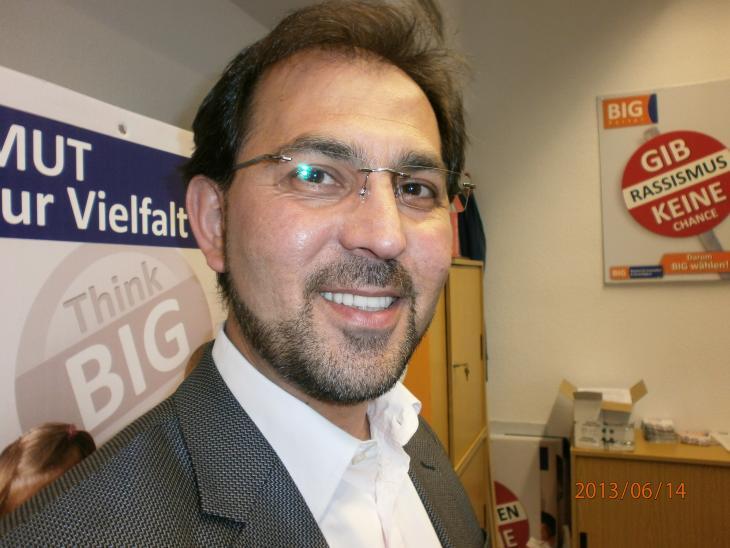 Giving diversity a political voice in Germany: with members from 42 different ethnic backgrounds, the Alliance for Innovation and Justice (BIG) is Germany's most diverse political party. Pictured here: Haluk Yildiz, federal chairman of the BIG

The forum considers itself an organisation of migrants within the CDU. In contrast to the Muslim members of the SPD or the Greens, the CDU platform sees no need for changes on the headscarf issue. "It's important to us that valid laws and regulations are obeyed – whatever form they take."

The forum is also reserved on the subject of the recognition of Islam as a religious community: "That's a difficult question. We're in favour of everyone being able to practice their religion freely." In the debate over dual passports for children from immigrant families, Saadettin Tuzun says that the individuals in question "should automatically be granted both passports without having to provide special proof." This is in sharp contrast to the new draft legislation on dual passports recently drawn up by the ruling CDU-SPD coalition.

Diversity is not only a trend in Germany's long-standing political parties, it is also making a mark on the country's entire political landscape. A first nationwide party was founded by Muslims in North Rhine-Westphalia in February 2010. The Alliance for Innovation and Justice (BIG) does not regard itself as an ethnic or religious party, but as a "German party with the unique feature of representing multiculturalism in Germany," says the federal chairman Haluk Yildiz.

With members from 42 different ethnic backgrounds, the BIG is more diverse than any other in Germany. The alliance is now present in ten federal states and has 40 local branches. It was founded with the aim of giving a political voice to diversity in Germany. Yet in view of the existing parties and their working groups, is it not superfluous – or even counterproductive – to found a new party with an immigration profile?

"No, because we want to represent ourselves in an authentic manner and not be assimilated into the established parties in the form of working groups," says Yildiz. Groups within established parties, he says, are a "pseudo-structure like the integration committees, because the political will of these advisory committees has next to no influence on existing party ideologies."

That is evident on the subject of immigrants' right to vote in local elections, he says, or the discussions on dual citizenship. Like the Muslim working groups, the BIG wants to scrap the ban on headscarves for teachers and have Islam recognised as a religious community. However, it rejects adoption by gay and lesbian couples, citing the child's well-being as its priority.

Whether Muslim working groups have modest membership figures, are conservative or liberal in their orientation, are organised within established parties or prefer to set up their own, is not the key factor. What really matters is that Muslims or people with a migrant background are becoming increasingly involved in Germany's political arena and are actively shaping society.

German Middle East analyst Guido Steinberg and television journalist Ulrich Tilgner have both published new books on the conflicts in the Middle East. Their analyses and their ... END_OF_DOCUMENT_TOKEN_TO_BE_REPLACED

On 7 March, Switzerland became the latest European country to vote in favour of a so-called "burka" ban. It was yet another feather in the cap of the right-wing populist Swiss ... END_OF_DOCUMENT_TOKEN_TO_BE_REPLACED

Syrian-born Rafik Schami is a gifted storyteller and one of the most successful authors writing in German today. In his 50 years in exile in Germany, he has introduced the Arab ... END_OF_DOCUMENT_TOKEN_TO_BE_REPLACED

The Syrian war has moved through many phases and included a number of changing actors. But one aspect has remained constant throughout: the Assad regime is using the conflict to ... END_OF_DOCUMENT_TOKEN_TO_BE_REPLACED

It's no secret that the Baha'i community in Iran is persecuted. Now, a document has come to light that appears to show the extent to which the repression is state-sponsored. By ... END_OF_DOCUMENT_TOKEN_TO_BE_REPLACED
Author:
Ulrike Hummel
Date:
Mail:
Send via mail

END_OF_DOCUMENT_TOKEN_TO_BE_REPLACED
Social media
and networks
Subscribe to our
newsletter