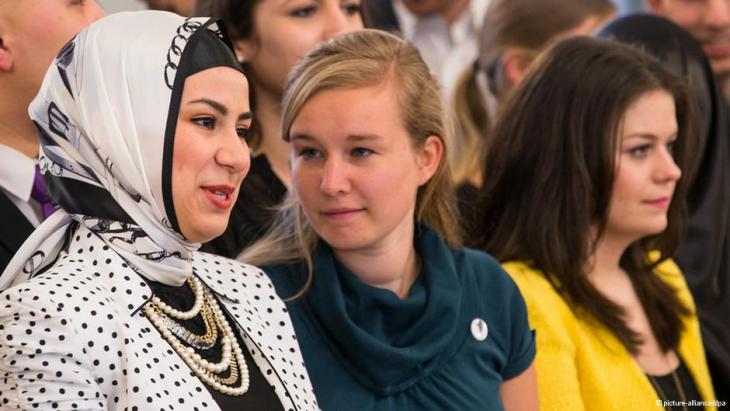 Muslims should engage and transform this society. This would require them, however, to overcome the fear of being liked by some. Or is the only good Muslim a rejected Muslim? An essay by Charlotte Wiedemann

There are dark days when I only want to shut my eyes when reading the newspaper. Just like a child shutting its eyes tight – "I'm not here!" And the world is also not there. In these dark days, I have read how one Muslim poured acid on the face of another in Zanzibar, so that the wrong political opinion would also have to reveal a monstrously deformed countenance.

In these dark days, I read how Muslims in the Westgate Mall in Nairobi had a gun pointed to their head while they were forced to recite the Shahada, the Islamic profession of faith, in order to prove themselves worthy to stay alive.

I have been writing about Muslim societies for a decade and a half, without having to personally experience such moments. Yet, that is of little use to me on such dark days. On the contrary. Proximity evokes pain. What I lack is the distance to all those who already regard Muslims as a strange sort of people, perpetrators on demand, whose deeds are merely the fulfilment of a long-standing prophesy.

And then, to top it all off, I read of a judgement by a high court in Malaysia, where I had lived for some time. Christians there are no longer permitted to refer to God as Allah, as they have done for centuries due to the fact that the Malaysian language has appropriated many Arab words over time. Stupidity can be just as unbearable as violence. 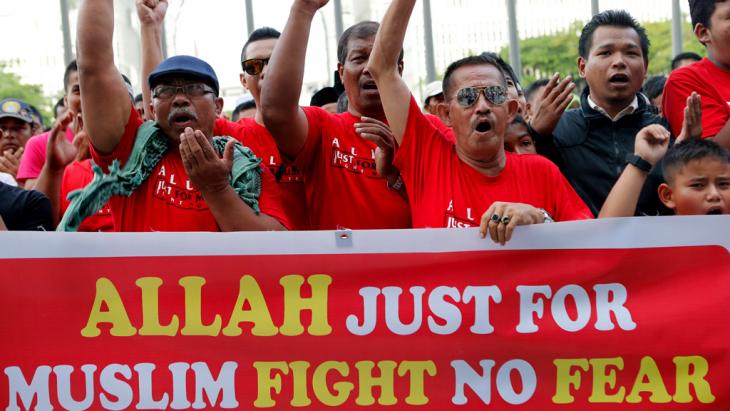 "Stupidity can be just as unbearable as violence": The court of appeal in Malaysia has forbidden a Christian newspaper from employing the word "Allah" for God

On bright days, I am once again reminded of what I have written a thousand times. It is a matter of how the dark news is selected. Long live the negative, more room for horror! I sit here at an intersection point for all the shocking news and consume a daily overdose of one-sided reports. Whoever there doesn't want to end up as an Islamaphobe has to have a good defence system. Yet, how quickly it can run down! It is about time to pep it up – in a country where I am surrounded by a Muslim majority society, to allow me to perceive once again where the majority are.

Before leaving on my trip, yearning for the brightness, I once again read the second book written by the Münster-based theologian Mouhanad Khorchide, "Sharia – the misunderstood God." So much for now, let it be said that it is not a book about coming to grips with the type of corporal punishment usually associated with the word Sharia in the West.

In fact, Sharia, literally translated as "the path to the watering hole", embodies the sum of all religious instruction, and Khorchide makes it into, as the subtitle of the book claims, the path to a "modern Islamic ethics". Put succinctly, a nice, mild Sharia, which beckons the love of God instead of his wrath. This is exactly what the Sufis did many centuries ago, although it still reads somewhat slushy. And Khorchide also appears in the light of the expert on God after a recent exclusive interview with the Allmighty. Breaking News: "God wants a relationship of dialogue with mankind!"

Worship of the smart phone

Yet, the rejection encountered by the professor from many Muslim representatives in Germany has other reasons. It primarily has to do with his post as head of the Centre for Islamic Theology at Münster University and the positive response his book has enjoyed in non-Muslim media. 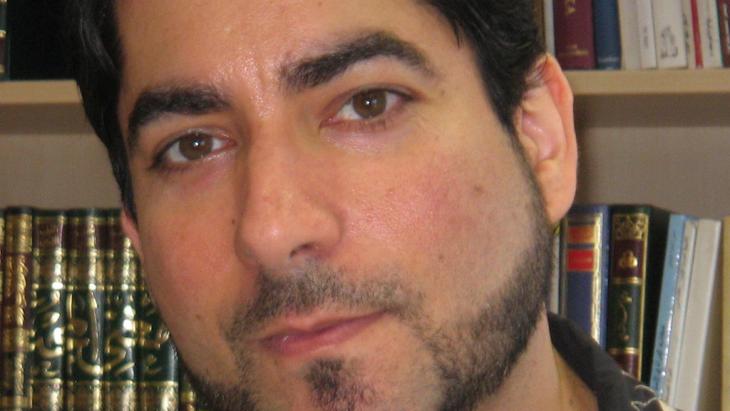 Mouhanad Khorchide is Professor of Islamic Studies. In his work, he advocates an understanding of Islam that focuses on a "message of compassion, originating from an absolutely compassionate God". According to Khorchide, "God is not a dictator, who expects that everyone only obeys him"

I am not in a position to judge whether Khorchide with some of his positions, such as paradise being open to non-Muslims, is beyond the ken of all Islamic schools of law. The widely held fear that the still young field of Islamic theology will yield a politically acceptable state Islam in Germany is an understandable one. And it will be maintained as long as the state and media continue their clear tendency to classify Muslims into a good and bad sort, ready to hug the soft ones and condemn the rigid ones as being practically terrorists.

Despite all this, what is so bad in an extremely Islamaphobic society about presenting Islam as an easily accessible and pleasant doctrine of compassion? It is hardly the case that Germans will convert en masse to Islam on account of Khorchide. They could, however, recognise Islam as a religion with ethical principles that may even appear familiar to them and which would even do a world of good if everyone adhered to them.

I can recall quite well what impressed me from the start with the so-called Muslim world and Islam as such. It was the people. They received me with such hospitality and humour. They did not cite piety, they lived it. They had "adorned hearts", as Khorchide says, citing al-Ghazali.

What he criticises is something that I later often observed over the years. It is the focus on formalities and the neglect of religious and ethical responsibilities when it is a matter of so-called temporal affairs. Young Muslims, who have founded environmental groups in Germany, know exactly what I am referring to here.

Perhaps Khorchide is simply the wrong man to say the right thing. Or he has found himself on the wrong stage when he attempts to criticise Muslims from the publishing house of the pope (Herder). In any case, something extremely fatal has come about. Muslims, who have suffered long enough under the "Sharia thrashing" by the majority society, now perceives the wonderful Sharia like a dagger in the back. How appallingly unproductive this all is! 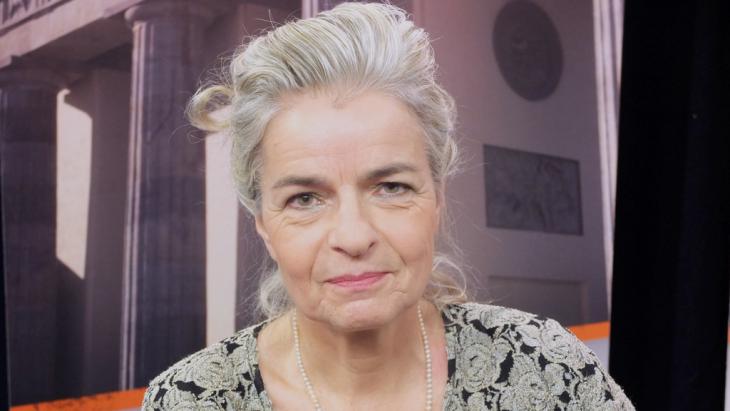 Charlotte Wiedemann is a freelance writer and is known for her literary reporting from all over the Muslim world. Her most recent book, "An Attempt not to Write White" (Vom Versuch, nicht weiß zu schreiben) was published in 2012

Muslim life in Germany has yet to develop a degree of intellectual and ethical charisma, perhaps because all efforts have been aimed at achieving social and government recognition, while, at the same time, defending itself from state interference. This has all the charm of ceasefire negotiations.

I wish that Muslims would take up what I have said in order to engage and transform this society. This would require them, however, to overcome the fear of being liked by some. Or is the only good Muslim a rejected Muslim?

A fatal state of affairs would be when all those who have long suffered under "Sharia bashing" now find the wonderful Sharia is a dagger in the back.

Home
Print
Newsletter
More on this topic
Interview with Mouhanad Khorchide: ''God Is Not A Dictator''Islamophobia: Evidence Does Not Support Fears of Islam in the WestCharlotte Wiedemann & Mansoura Ez-Eldin: Prospects for Women in the Arab Spring
Related Topics
Criticism of Islam, Islam and the West, Islam in Germany, Islamic theology in Germany, Islamophobia, Mouhanad Khorchide, Reform Islam, Sharia
All Topics

Iranian author Fariba Vafi is adept at describing everyday scenes and concealing within them something ambiguous, in parts strange and grotesque. She writes novels – which have ... END_OF_DOCUMENT_TOKEN_TO_BE_REPLACED

Her grandparents are Jews – born in Tunisia and Algeria. Director Cleo Cohen has now broken the silence about this with a very personal debut. By Nadine Wojcik END_OF_DOCUMENT_TOKEN_TO_BE_REPLACED

Life imprisonment for crimes against humanity: that was the sentence handed down to Anwar Raslan in the world's first trial of a member of the Syrian torture system. Matthias von ... END_OF_DOCUMENT_TOKEN_TO_BE_REPLACED

Every year in December, the team at Qantara.de takes a look back at the articles that proved most popular with our readers. This year is no different. Here is a run-down of the ... END_OF_DOCUMENT_TOKEN_TO_BE_REPLACED

With his new album, "A Voice Keeps Calling Me", the Persian santur player Kioomars Musayyebi is building bridges from Iran across the Arab world to European early music. By Stefan ... END_OF_DOCUMENT_TOKEN_TO_BE_REPLACED

Former lawyer Said Haider has invented a chatbot for those seeking advice on anti-discrimination issues – Meta is the first chatbot of its kind in the world. In conversation with ... END_OF_DOCUMENT_TOKEN_TO_BE_REPLACED
Author:
Charlotte Wiedemann
Date:
Mail:
Send via mail

END_OF_DOCUMENT_TOKEN_TO_BE_REPLACED
Social media
and networks
Subscribe to our
newsletter