Muslims in Germany form a potential voting block that cannot to be ignored. But what are their political preferences and to what extent do the German parties take Muslim sensibilities into account? Moritz Baumstieger reports 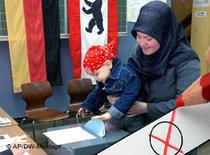 At the ballot box: according to a study from 2009, there are 1.1 million Muslims eligible to vote – some 1.7 percent of total eligible voters

​​Henny Kreeft would like to make one think clear. "We are not working to establish an Islamic Republic of the Netherlands." Kreeft, 53-years-old, is the Chairman of the Dutch Muslim Party (NMP), which announced in early August that it would field candidates in the next communal and parliamentary elections. Since then, he has spent much of his time trying to dissipate anxieties.

The NMP, established in 2007, has potential. The Netherlands has only a 0.66 percent threshold for candidates to overcome in order to be eligible for representation in parliament. With one million Muslims in a country with a total population of 16 million, this could be enough to enable a breakthrough for the party.

There was once even an Islamic party in Germany. It was registered in 1998, but whoever dials its Munich telephone number will hear the message "this number is no longer in service." In 2002, the Federal Returning Office removed the party from the electoral list as it had not participated in any elections nor had it complied with the requirements on providing information about itself.

Nonetheless, Muslims in Germany form a potential voting block that cannot to be ignored. This is especially the case when elections are as close as they were in 2005. Yet, the search for figures is difficult – even the total number of Muslims living in Germany is vague. After prolonged calculations, the Islam Conference, a body initiated by German Interior Minister Wolfgang Schäuble (CDU), issued a study at the end of last June estimating the total number of Muslims in Germany at between 3.8 and 4.3 million, of which 1.84 million hold a German passport. 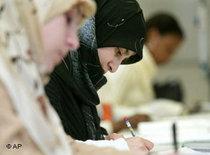 Bülent Arslan: "You can't win the trust of Muslims by continuously characterizing them as a problem"

​​The German Federal Statistics Office conservatively estimates that some 750,000 Muslims are eligible to vote in the country.

Someone with perhaps a better idea of the figures is Salim Abdullah, Director of the Central Institute Islam Archive in Soest, the oldest Islamic institution in Germany. He regularly publishes a study entitled "New Facts and Figures on Islamic Life in Germany." Abdullah's polling is based on responses by some 1500 participants.

When it comes to questions about voting preferences among Muslims, the Federal Statistics Office in Wiesbaden turns to the archive. Even the Interior Ministry regards the data from Soest as the most reliable available.

According to a previously unpublished study from 2009 presented in excerpts by the Frankfurter Rundschau newspaper, there are 1.1 million Muslims eligible to vote – some 1.7 percent of total eligible voters. The new study also indicates how Muslims tend to vote.

Frank-Walter Steinmeier (SPD) would probably have mixed feelings when glancing at the results of this poll. The Social Democrats are in first place with 35.5 percent of the vote, but only two years ago, 52 percent of Muslims were willing to cast their ballots for the SPD. The party has primarily lost ground to non-voters. 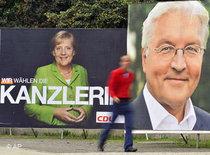 Social Democrats are estimated in first place with 35.5 percent of the vote of German Muslims, but only two years ago, 52 percent of Muslims were willing to cast their ballots for the SPD

​​In 2007, only 3.7 percent of respondents reported that they wouldn't vote. Now it is 16 percent and another 20 percent remain undecided about voting.

The demand by Minister of Justice Brigitte Zypries (SPD) to introduce dual citizenship is a calculated electioneering move. The Greens have increased their support by 3.6 percent to a current level of 18 percent. This is a clear result of choosing Cem Özdemir as their leader, as confirmed by additional questions in the study.

The Left Party and FDP don't even make it to 5 percent, the cut-off threshold for seats in the German Bundestag. The same holds true of the CDU, which only garnered 4 percent support.

Bülent Arslan from the German-Turkish Forum of the CDU is attempting to turn these figures around. He believes the party holds a trump card that can be used to attract Muslims. "The 'C' in our party name stands for an ideal of man based on religious values also common to Islam." One problem, however, is the manner in which the CDU has presented itself in the past. "You can't win the trust of Muslims by continuously characterizing them as a problem."

Hasret Karacuban of the Greens concurs with Arslan on this issue. "The immigration policies of the CDU leave a lot to be desired," says the spokesman for the 'Green Muslims.' This makes it improbable that the CDU can win votes among Muslims, even when this group includes many adhering to conservative values. In order to attract these voters, the party needs a coordinated strategy. This is currently lacking, says Arslan, "and it is an issue on which I criticise my own party."

The 34-year-old attempted to run as a candidate for the CDU in 2002 and 2005, but couldn't convince the party hierarchy. "It became clear to me that the time was not yet ripe. However, we in the CDU have to adapt before it is too late."

The SPD already opened its doors in the 1970s. At the time, labour unions served as a bridge to the party for many workers of Turkish origin. The Left Party also benefits from this connection. The FDP, by contrast, manages to win points from Muslim entrepreneurs.

"Adhere to the constitution!"

Do German Muslims require their own party? Bekir Altas from the General Secretariat of Milli Görüs says, "Muslims participate in daily life in Germany and are part of society. They should therefore engage themselves in the established parties." 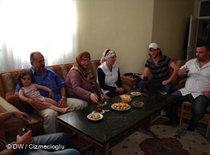 German Muslims are part of German society, says Bekir Altas. "They should therefore engage themselves in the established parties"

​​The Central Committee of Muslims also doesn't think much of the idea. "Of course, we could tip the scales in an election, but I regard this possibility as much too limited," says Deputy Chair Maryam Brigitte Weiss. "It is neither desirable or sensible to establish an Islamic party in Germany."

Henny Kreeft can understand those who chose to work towards integration. The situation in the Netherlands, however, is different. "We were established as a reaction to Geert Wilder's Anti-Islam Party." The right-wing group now has nine members in the Dutch parliament and demands a ban on immigration for Muslims.

Kreeft nonetheless recommends that German Muslims exercise their "democratic right to found a party" if they are not happy within the established parties. And he quickly adds his standard bit of advice, "But by all means, adhere to the constitution!"

Bülent Arslan
As Muslim in the Christian Democratic Party
Bülent Arslan is a politician with a Turkish background, a practicing Muslim, and a member of a party whose program includes an appeal to Christian values. Peter Philipp spoke with him about this apparent paradox.

Interview with Bilgehan Köhler
"Get Involved or Emigrate"
The Liberal Turkish-German Association (LTD), which has ties to the Free Democratic Party (FDP), was founded ten years ago. In July 2003 the Cologne branch of the LTD was established. Qantara.de spoke with the deputy chair Bilgehan Köhler.

Interview with Emine Demirbüken-Wegner
A Muslim in the Christian Democrat Party
Emine Demirbüken-Wegner, member of the executive board of the Christian Democrat Party in Berlin State, talks about her election to the party's national executive, the issue of a "dominant German culture," and integration. Interview by Dagmar Trüschuch

END_OF_DOCUMENT_TOKEN_TO_BE_REPLACED
Social media
and networks
Subscribe to our
newsletter