Muslims in Laos
Hidden Beyond the Mekong

In terms of economic and political freedom, Laos still ranks among the most restricted countries in the world. It is all the more surprising, therefore, that the country's Muslims enjoy considerable religious freedom. Yogi Sikand paid a visit to Southeast Asia's smallest Muslim community

In terms of economic and political freedom, Laos still ranks among the most restricted countries in the world. It is all the more surprising, therefore, that the country’s Muslims enjoy considerable religious freedom. Yogi Sikand paid a visit to Southeast Asia’s smallest Muslim community

There are just two mosques in the whole of Laos, both of them in the capital Vientiane. The Azhar mosque (pictured here) is known locally as "Masjid Cambodia", a reference to the ethnic roots of the people who worship here

​​Sandwiched between Thailand to the west, China to the north, and Cambodia and Vietnam in the east, and with a population of less than seven million, Laos is one of the smallest countries in South-East Asia. It is also one of the poorest countries in the world. Some sixty per cent of Lao's population belongs to the dominant Lao ethnic group, most of who claim to be Buddhists.

Around a third of Laotians, mainly from the minority Hmong and Khmu communities, are animists, worshipping various forest and ancestor spirits. Muslims form a very small proportion of Lao's population. Community leaders estimate their number of be less than eight hundred, making Laos possibly the country with the lowest number and proportion of Muslims in the whole of Asia.

The first Muslims in Laos are said to have arrived in the early twentieth century, when the country was under French colonial rule. Most of them were Tamil-speaking Labbais and Rawthers from south India, many of them from the French-ruled enclave of Pondicherry along the south-eastern coast of the Bay of Bengal. The majority of them were single men, who worked mainly as guards and labourers in Vientiane, the capital of Laos. They were later joined by Pashtu-speaking Pakhtun Muslims from the North-West Frontier Province in what is now Pakistan. Many of these were earlier employed in the British army and had been stationed in neighbouring Burma during the First World War.

In 1953, Laos won freedom from the French after a long and bloody struggle. However, years of chaos followed, plunging Laos into a deadly war between American-backed forces and the communist Pathet Lao, supported by Vietnam and China. In 1973, America was forced to halt its war against Laos, and, two years after, the communists took over the entire country and established the Lao Peoples' Democratic Republic.

In the mid-1960s, the Muslim population in Laos was estimated at around seven thousand. However, the war in the country forced most of them to flee to various other countries. Most of those who remained were the poor, who could not afford to shift elsewhere. 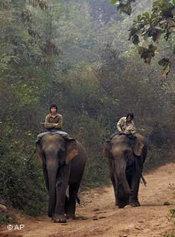 Laos is still a predominantly agricultural country; like the rest of the population, the country's Muslims lead a modest life

​​Today, a little more than a hundred Muslim families remain in Laos. The single-largest ethnic group among them are Muslims of Cambodian origin, numbering sixty-one families. The first Muslims from Cambodia arrived in Laos as workers and small traders some forty years ago, but most of them came after the mid-1980s, when their homeland was taken over by the deadly Khmer Rouge. Today, most of them live by selling traditional medicinal herbs, which they import from Cambodia.

Most of Vientiane's Cambodian Muslims cluster around in a locality not far from the town's Chinese quarter. In the centre of their settlement is a large mosque, established in 1986, the Majid Azhaar – a graceful building topped with numerous gilded domes, which contains two large rooms. One room serves as a prayer-hall, and the other as a maktab, where some fifty Cambodian Muslim children study in two daily shifts that are timed in such a way as to allow them to attend regular school as well.

Pakhtuns from Pakistan's North-West Frontier Province are the largest Muslim ethnic group in Laos after the Cambodian Muslims. In recent years, the community has been considerably depleted with migration to Pakistan and Western countries, and it now numbers less than thirty families.

Almost all of them are Lao citizens, and some twenty Pakhtun men have married Lao women, the women having converted to Islam thereafter. Roughly a dozen Pakhtun men are in government service, including one who is a top-ranking police officer. Most of the rest are fairly prosperous cloth merchants based in Vientiane, and several of them own considerable amounts of agricultural land.

Equal linguistic rights: At the Jamia Masjid, the Friday congregations is addressed in both Urdu and Tamil, alternately using one of the languages every week

​​The third, and smallest, Muslim ethnic group in Laos are Tamil-speakers from southern India, who number around seventy. Most of them are engaged in the cosmetics trade, importing their goods from China, Vietnam and Thailand.

The Jamia Masjid mosque in the heart of Vientiane serves mainly Pakhtuns and Tamil Muslims. The Imam of the mosque, Maulvi Qamruddin, is a Tamil, and addresses the Friday congregations in both Urdu and Tamil, alternately using one of the languages every week. The mosque has a small maktab attached to it, where children are taught Arabic and about Islam, and the medium of instruction is Lao.

Laos' Tamil Muslims, along with Pakhtun and Cambodian Muslims living in the country, recently joined together to set up the Muslim Association of Laos to oversee Muslim community affairs and also to liaison with the government. Says Haji Muhammad Rafiq, alias Sofi Sengsone, President of the Association, "Our relations with the Lao government have always been very good and we face no problems at all in our religious affairs. The Lao people, in general, are very gentle and affectionate," he adds, "and we think it is our good fortune to be living here."

A Meeting with Nik Aziz
"Look at the Prophet ans How He Lived"
Nik Aziz, state chief minister of Kelantan and spiritual leader of the Islamic PAS party, is also a charismatic personality. Mike Millard visits him in his ministerial offices and talks with him about how Islam may be tolerant and yet retain its principles

Southeast Asia
Moderate Muslims and the Iraq War
Moderate Muslim cultures of Southeast Asia are reacting to the US-led "War on Terror" and the military invasion of Iraq. For 250 Million Malay-speaking Muslims, this has meant readjusting their view of the World – and a change of domestic power balances. By Amri Baharuddin Shamsul

END_OF_DOCUMENT_TOKEN_TO_BE_REPLACED
Social media
and networks
Subscribe to our
newsletter