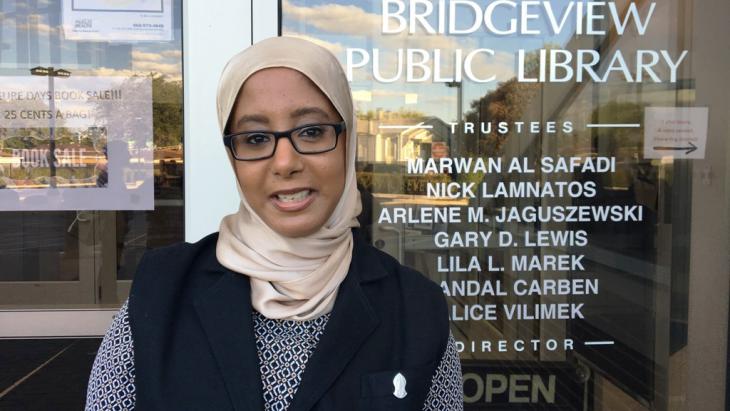 Muslims in the USA

The American Muslim Hind Makki works to promote interfaith dialogue in her neighbourhood Bridgeview, known as the "Little Palestine" of Chicago. She observes that in recent times, the Islamic minority's interest in politics has risen sharply – thanks to Trump. By Canan Topcu

Had Nareman Taha's father stuck to his original plan, then she would probably not have become a US citizen. Almost 50 years ago, her father travelled from Ramallah to Brazil, but only stayed there a few years. From there he continued his journey, eventually ending up in New York, where he remained.

On the insistence of his mother, he married a woman from his homeland. But it was almost two years before the bride received an entry visa for the US. And so it was that Nareman was born in Palestine. "I was one when my mother and I entered the US," reports Nareman Taha. She is now 41 years old and herself the mother of two sons, aged 14 and 17.

Nareman Taha tells her family's story at a meeting in Bridgeview, a suburb of Chicago. The neighbourhood is known as "Little Palestine". Since the 1950s, migrants from the Middle East have come to settle here – mainly from Palestine and Jordan, later also from Iraq and Syria. Bridgeview now has one of the largest Muslim communities in the US and it's believed to be the largest in the state of Illinois.

Over the decades, the Muslim immigrants in Bridgeview established their own infrastructure: today there are barbers and cosmetic salons, restaurants and bakeries selling Middle Eastern specialities, shops selling Middle Eastern groceries, a girls′ school and a number of mosques. Bridgeview is home to first, second and third generation Muslim immigrants. But not everyone feels at home there. "Some of those from the first generation still dream of returning home," says Nareman Taha. The psychologist and head of a support facility for emigrants knows this from conversations with clients, but also from her own parents. 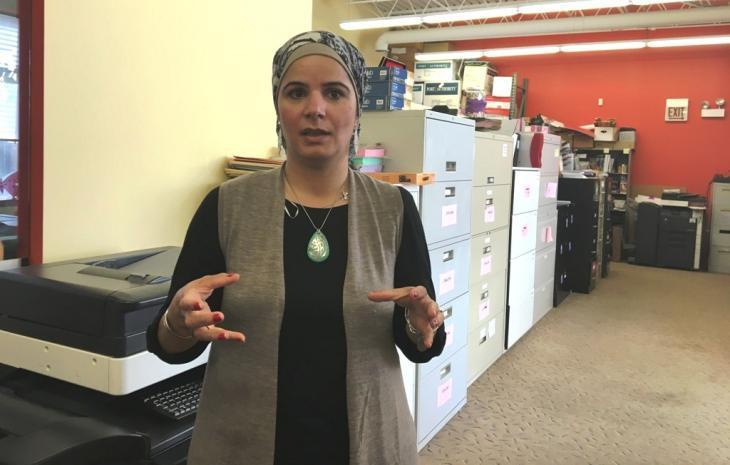 "Muslim American": Nareman Taha is one of the 18 percent of Muslims in the US who, according to a study by the Washington-based Pew Research Center, identify as Muslim and US-American; 26 percent of Muslims polled identified first and foremost as American and 49 percent primarily as Muslim

Nareman Taha sees herself as a "Muslim American". She is one of the 18 percent of Muslims in the US who, according to a study by the Washington-based Pew Research Center, identify as Muslim and US-American; 26 percent of Muslims polled identified first and foremost as American and 49 percent primarily as Muslim.

Nareman Taha wears a headscarf and is quite open about her faith. Even before the electoral race for the White House, identifying publicly as a Muslim was not without its problems. Now, in the run-up to the poll, it has again become an incendiary issue as Republican candidate Donald Trump has repeatedly made comments fomenting hostility towards Muslims in a bid to garner votes.

His statements have not been without their consequences: according to a study by Georgetown University in Washington, the number of Islamophobic attacks increased in 2015 in comparison to previous years. A total of 174 attacks were reported; 12 Muslims were killed. The authors of the study make links between this development and Trump's rhetoric.

But the Islamophobic propaganda does not appear to worry all of the nation's Muslims. When asked about this, many Muslims in Bridgeview respond calmly, or with a shrug of the shoulders. But there are also other Muslims – those who are concerned about the situation in the US. First and foremost young Muslims who grew up in the United States or who were born there. They have their way of countering Trump – for example, a group of young women with a YouTube message for Donald Trump: "You want me to go back to my country? You should go back to real estate," they say.

Among the younger Muslims living in Bridgeview is Hind Makki, who views herself as an American female Muslim of Afro-Arab origin. Makki was born in Chicago, the daughter of Somali immigrants. The young woman has for some time now been working to promote interfaith dialogue in her neighbourhood. The 31-year-old reports that it is primarily veiled women who are currently experiencing growing hostility towards Muslims. These days, for example, there are more frequent reports of airlines not allowing veiled passengers onto planes, as other passengers claim to feel threatened.

Turning point in the electoral behaviour of American Muslims

"Meetings used to be about conveying knowledge about Islam, but these days the focus is on conveying to people that Muslims are not terrorists," explains Hind Makki. White US-Americans didn't know much about Islam, on the other hand American Muslims have thus far shown far too little interest in US-American politics. Throughout her childhood and youth, she cannot recall an imam ever calling upon the congregation to exercise their right to vote. But, she says, the situation has been fundamentally altered by the candidacy of Donald Trump.

Hind Makki is not alone in this assessment. Other Muslim actors and functionaries are also saying that the Republican presidential candidate has achieved one thing at least: he has heightened the political consciousness of US-American Muslims. More than ever, mosque communities and Muslim institutions are currently engaged in mobilising their members for the elections on 8 November.

Mosque communities, like other religious communities, are not generally allowed to do any canvassing or speak out in favour of particular candidates, but they are however entitled to call on people to participate in the selection of delegates. And they are doing just that. Mosques and other Muslim welfare and education facilities display information on the US-American electoral system as well as voter registration forms. 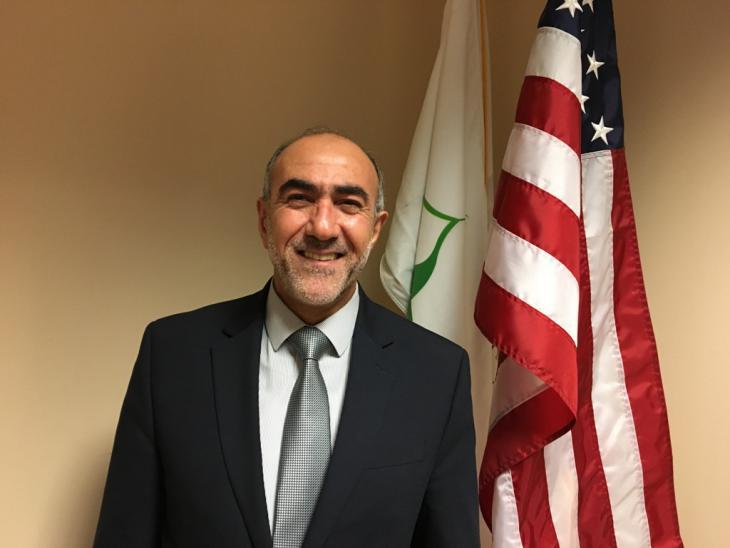 "Muslims are a part of US-American society and should therefore keep a close eye on whoever excludes which groups from this society," explains Oussama Jammal, chairman of the Mosque Foundation in Bridgeview

"Muslims are a part of US-American society and should therefore keep a close eye on whoever excludes which groups from this society," explains Oussama Jammal. He comes from Lebanon, is a businessman and active on a voluntary basis as chairman of the Mosque Foundation in Bridgeview.

The mosque community, founded by Palestinian immigrants in the early 1950s, is currently receiving plenty of attention from politicians. Not without reason: there are currently 3.3 million Muslims living in the US, representing only about one percent of the entire population of the US. But in comparison with other immigrants, of which just under 50 percent have had themselves naturalised, 70 percent of Muslim immigrants are US citizens and therefore have the right to vote.

When Jammal's mosque community issued invitations to Eid in September, more than 25,000 people attended celebrations in a football stadium – among them local politicians. Donald Trump would certainly have also liked to have come and would have used the opportunity to congratulate Muslims on their festival. But the community committee rejected a request from Trump's campaign team – knowing full well that any appearance would not have been concerned with the interests of Muslim citizens. Trump would have used his appearance to rally the support of undecided voters, who struggle with the presidential candidate's incessant anti-Muslim rants.

Muslim US-Americans do not represent a monolithic block, but are an exceedingly diverse minority, with regard to both their origins and their religious character. But Nariman Taha, Hind Makki and Oussama Jammal have one thing in common with all the other Muslims of America: they are most certainly do not support presidential hopeful Donald Trump.

Home
Print
Newsletter
More on this topic
Islamophobia in the USA: Standing up for Muslim rightsUS presidential elections: Huma Abedin – the woman in the shadowsRight-wing populism in Europe and the USA: The politics of Islamophobia
Related Topics
Donald Trump, Islam and the West, Islam in the U.S., Islamophobia, Muslims in the West
All Topics

"American*ish" – co-written by Aizzah Fatima and Iman K. Zawahry, and directed by the latter – is a rom com for an America too many don't want to acknowledge. Whereas most ... END_OF_DOCUMENT_TOKEN_TO_BE_REPLACED

International relations are shifting across the Middle East as regional powers adapt to America's retrenchment and China's growing influence. Although the region could become the ... END_OF_DOCUMENT_TOKEN_TO_BE_REPLACED

A deluge of books, movies, series and cover stories: ever since the events of 9/11, the West has seemed almost manically preoccupied with Islam. Yet this has rarely led to deeper ... END_OF_DOCUMENT_TOKEN_TO_BE_REPLACED

Twenty years after 9/11, the world is faced with the dual challenge of Islamophobia and anti-Westernism. Ahmet Kuru argues that Muslims in the West, well versed in both Western ... END_OF_DOCUMENT_TOKEN_TO_BE_REPLACED

Two decades after the attacks of 11 September 2001, the West faces the shattered debris of its failure – not only in Afghanistan, but also in Iraq, Syria, Libya and Yemen. What ... END_OF_DOCUMENT_TOKEN_TO_BE_REPLACED

Twenty years after 9/11, the United States is recalibrating its war policy. However, its assertions that the era of endless wars is over are a myth, writes Maha Hilal END_OF_DOCUMENT_TOKEN_TO_BE_REPLACED
Author:
Canan Topçu
Date:
Mail:
Send via mail

END_OF_DOCUMENT_TOKEN_TO_BE_REPLACED
Social media
and networks
Subscribe to our
newsletter