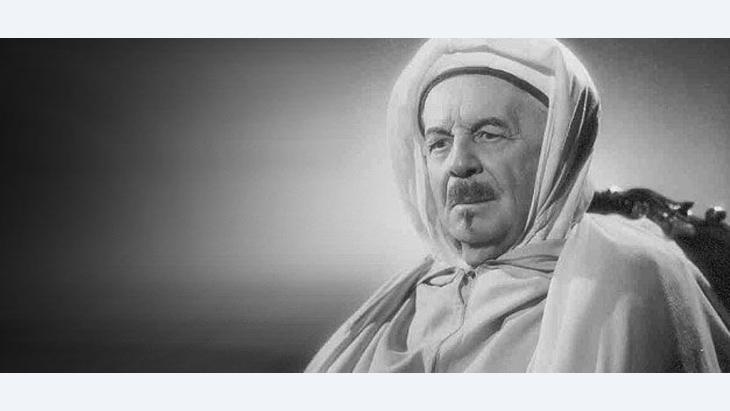 During the Second World War, Muslims like Si Kaddour Benghabrit and Abdul Hussain Sardari risked their lives to save many Jews from deportation. Sadly, however, their selfless actions have long been forgotten. By Emran Feroz

The Middle East conflict is often and quite unilaterally portrayed as a "religious war". Yet the long and frequent historical epochs in which Jews and Muslims have lived peacefully together – both in the Orient as well as in the West – demonstrate how far this viewpoint is from the truth. Examples of this peaceful co-existence and even mutual aid are, however, much less well known than those that supposedly affirm the eternal clash of cultures.

At a time when racist fanaticism raged under Nazi rule, some Muslims risked their lives in order to save Jews. Yet their courageous acts have long been forgotten. One such case took place at the Grand Mosque in Paris. The "Grande Mosquée de Paris" was opened in 1926 and is still considered to be one of the most beautiful Islamic places of worship in all of Europe. The Paris Mosque was constructed as a gesture of gratitude to those Muslims who fought against the Germans in World War I as members of the "tirailleurs", the colonial auxiliary troops. In the Great War, some 70,000 Muslims died serving under the French flag.

After the German invasion of France in 1940, the country's Jews found themselves in mortal danger. At the time, Si Kaddour Benghabrit, a French Algerian, was the rector and head imam at the Paris Mosque. Many Oriental Jews, or Mizrahim, turned to him for help. One of these was the young Salim Halali, who later became a popular singer and actor and who died in 2005. Benghabrit welcomed many of these Jews into the mosque and masked their backgrounds by providing them with a Muslim identity.

It was not all that difficult for Benghabrit to fool the occupying authorities, as Oriental Jews do not look all that different to their Muslim brothers and sisters, they speak the same language, and they have similar names. He arranged forged documents for all the Jewish refugees that verified their supposed Muslim roots, thereby saving them from deportation to a concentration camp. It remains uncertain how many Jews Benghabrit managed to save, but it could have been up to 2,000 individuals. These not only included many resistance fighters, but also a large number of women and children. 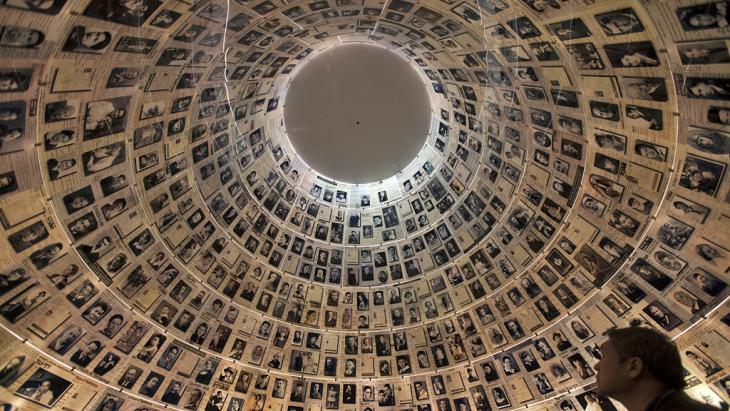 In the "Hall of Names" in Yad Vashem in Jerusalem (pictured above), the walls are lined with photos of Jewish victims of the Third Reich. There is also a collection of over two million memorial and biographical notes known as "Pages of Testimony" about Jews who died in the Holocaust

Another man who took similarly great risks in Paris during the Second World War, was Abdul Hussain Sardari. At the time, he was head of the Iranian Consulate in Paris. He was able to save around 2,000 Iranian Jews then living in France by confusing the Nazis with their own propaganda. As the Nazis regarded the Iranians as Aryans, Sardari claimed that Iranian Jews were, therefore, in principle, also Aryans. Regrettably, Sardari's brave deeds have since been forgotten not only in Europe, but also in the Islamic Republic of Iran.

The cases of Benghabrit and Sardari are reminiscent of that of Oskar Schindler, who saved more than a thousand Jews through his heroic acts. Not only was Schindler made the subject of a brilliant film that received numerous awards, he was also honoured for his deeds after the war and was a recipient of German Federal Cross of Merit.

In addition, his name is commemorated at the Holocaust memorial of Yad Vashem in Jerusalem. By contrast, the names of Si Kaddour Benghabrit and Abdul Hussain Sardari are hardly known by anyone. Neither of these men, both of whom placed their lives at risk and saved at least as many people as Schindler, if not more, are honoured in Yad Vashem.

The search for contemporary witnesses

In the "Garden of the Righteous among the Nations", which commemorates heroic deeds during the time of the Holocaust, some 24,000 names are recorded. A tiny proportion of them are Muslim. Last year, Yad Vashem added the name of the first Arab to its list, that of Mohammad Helmy, an Egyptian doctor who lived in Berlin in the 1940s. During this time, he hid Jewish friends in his home. Due to his "non-Aryan" background, Helmy himself faced numerous difficulties. Nevertheless, thanks to his efforts, all of the Jews hidden by Helmy managed to survive the Holocaust.

Historical consciousness, however, always reflects current political considerations. With the exacerbation of the Middle East conflict and after the Islamic Revolution in Iran, such Muslim rescuers of Jews have been almost completely forgotten. Yad Vashem, nonetheless, denies that this is intentional and points to the fact that there are approximately 60 Muslims on the list. 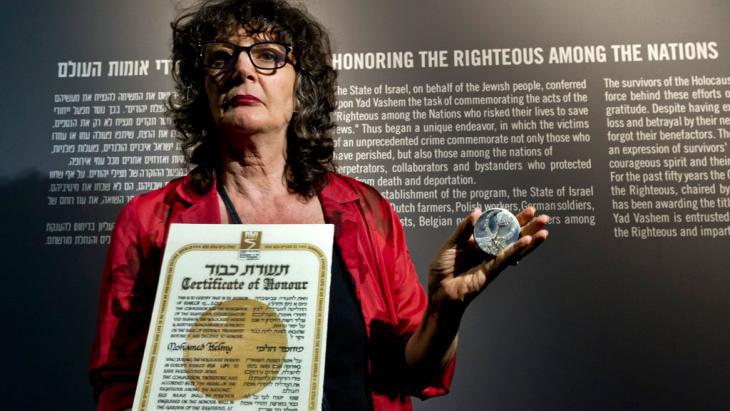 Irena Steinfeldt, director of Yad Vashem, is pictured here holding a medal and a certificate of honour that was posthumously awarded to Dr Mohamed Helmy, an Egyptian doctor who lived in the Third Reich during World War II and helped hide Jews to prevent them from being deported to a concentration camp

All the same, the name of Si Kaddour Benghabrit is still not included. When the war was over, some individuals who had found refuge in the Paris Mosque reported his acts of rescue. They wanted subsequent generations to know that Arabs also saved many Jews from death. In the past, Yad Vashem has attempted to find survivors or locate their descendants; staff also made efforts to unearth relevant documents from this period.

Unfortunately, the search for contemporary witnesses and documents has remained unsuccessful. According to Yad Vashem, should such evidence come to light, consideration would certainly be given to including Si Kaddour Benghabrit in the "Garden of the Righteous among the Nations". The same would apply to the Iranian diplomat Abdul Hussain Sardari.

Nevertheless, the actions of these two men demonstrate that Muslims and Jews can share something far beyond mutual understanding. Today in particular, in the light of the continuously escalating conflict in the Middle East, it is important to revive and preserve such memories.

Home
Print
Newsletter
More on this topic
Mohammed Helmy: First Arab Honoured by Israel for Rescuing Jewish Family from the NazisThe Arab Righteous of the Maghreb: The Arab Righteous of the MaghrebIsraeli-Palestinian relations: Dialogue in a time of conflict
Related Topics
History of the Near and Middle East, Human rights, Israeli-Palestinian dialogue, Jews in the Islamic world, National Socialism | Nazism, Places of Dialogue
All Topics

Using a graphic novel to address a contentious issue like the Algerian war of independence may seem an odd choice, but new release "Algeriennes", translated into English by Ivanka ... END_OF_DOCUMENT_TOKEN_TO_BE_REPLACED

Although a unity government was formed in Libya in March 2021, tensions and possible crises between the political actors are already emerging. What problems does the country face ... END_OF_DOCUMENT_TOKEN_TO_BE_REPLACED

India hits record numbers of COVID-19 infections worldwide for the sixth day running, as health systems buckle under the pressure, and shortages of medical oxygen and hospital ... END_OF_DOCUMENT_TOKEN_TO_BE_REPLACED

On 7 March, Switzerland became the latest European country to vote in favour of a so-called "burka" ban. It was yet another feather in the cap of the right-wing populist Swiss ... END_OF_DOCUMENT_TOKEN_TO_BE_REPLACED

German Middle East analyst Guido Steinberg and television journalist Ulrich Tilgner have both published new books on the conflicts in the Middle East. Their analyses and their ... END_OF_DOCUMENT_TOKEN_TO_BE_REPLACED

In Grenoble, France, two professors have been pilloried in a dispute over the use – or otherwise – of the term Islamophobia. Is freedom of speech in jeopardy? By Stefan Dege and ... END_OF_DOCUMENT_TOKEN_TO_BE_REPLACED

Comments for this article: The forgotten Schindlers

The article makes a very important point. Read with great interest. Entirely unfair for these two great names, and possibly those of other Muslims, to be excluded from the Garden's list of rescuers of Jews during the Holocaust. Hopefully to be corrected soon.

END_OF_DOCUMENT_TOKEN_TO_BE_REPLACED
Social media
and networks
Subscribe to our
newsletter