Portrait of the musician Bachar Mar-Khalife

The Lebanese-French musician Bachar Mar-Khalife creates soundscapes that resonate between Orient and avant-garde. His latest album "Ya Balad" features a musical spectrum that spans the divide between ironic reggae, electronic rhythms, Arab poetry and chansonesque lullaby. Stefan Franzen met up with the multi-instrumentalist and composer

"When I go into the studio, I go without any preconceived plan; I want to be anti-intellectual, organic, spontaneous, instinctive", says Bachar Mar-Khalife. This unfettered approach to music helps explain the ease with which he moves between so many musical genres. It is something he inherited from his father Marcel, a universally creative artist in his own right, who has not only encouraged restoration of the oud, but is also a mediator between the worlds of classical, jazz and traditional music. "He taught me a lot about things beyond the purely musical," admits the son. "He never allowed himself to be swayed by public opinion, always had the courage of his own convictions and an incredible devotion to his work."

At the age of six, Bachar and his parents were forced to flee the civil war in Lebanon, ending up in Paris. It was a time when, along with his mother's versions of the songs of popular Lebanese singers such as Fairuz, Asmahan and Sabah, he also became aware of the sounds of the first wave of French hip-hop, the chansons of Brassens and Ferre and the band Nirvana. The young Bachar was a voracious listener, and even as he was studying piano and percussion at the conservatory, influences as diverse as Michael Jackson's album "Dangerous", Bach and Mozart were vying with the modern works of Edgar Varese and Iannis Xenakis for his musical attention.

"Anything that made me dance or cry," is how Mar-Khalife now sums up his former taste in music. Discrimination would come later. Becoming aware of electronic music was the real game-changer as far as his listening habits were concerned.

Since that time Bachar Mar-Khalife has worked in many different musical contexts: with the Orchestre National de France, on film scores, and on collaborations with jazz and electronic musicians. He is currently touring with two musicians from Luxembourg, Pascal Schumacher and Francesco Tristano, as part of an equally unorthodox and successful trio, playing a mix of minimal music, jazz and pop. It is in his solo works, however, that his own distinctive musical signature emerges. "Ya Balad" ("Oh, My Country") is the third of these, an album whose theme of identity is of central importance to Bachar Mar-Khalife. "It is an album devoted to my country, though this does not necessarily mean Lebanon. I call it "My Distant Country", the imagination. When I think about Lebanon, I think about the country as it was in my childhood. That is what I miss, the country I remember, not the national flag. My sense of what home is has grown – I have no trouble at all feeling at home in Iceland," he laughs.

"Ya Balad" exudes this cosmopolitan spirit with a nostalgic filter in a range of very different scenarios. The opening track features multiple layered voices over Baroque harmonies in Mar-Khalife's interpretation of the "Kyrie eleison", a petition to God imploring him to have mercy on his people and leave them in peace. In "Lemon", he introduces a harpsichord re-tuned to the Arab quarter-tone scale and combines the sensitive love poetry of the Egyptian poet Samir Saady with club rhythms. "Balcoon", with its frothy reggae rhythms, may appear harmless initially, but what emerges is an ambivalent portrait of Lebanese youth: "Surrounded by war and refugees, their most pressing problem is planning their evenings. A glaring discrepancy, here very intriguingly translated into music." 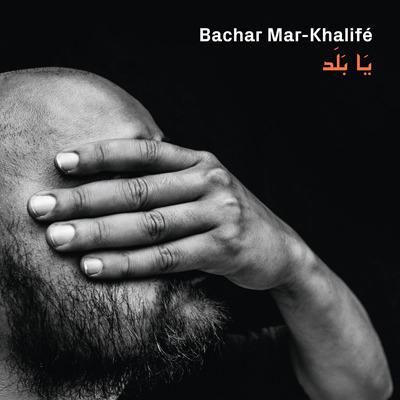 A process of inner exploration: Mar-Khalife has chosen to reflect this on the cover of the CD, where he is depicted in profile, though with one hand obscuring his features. The photographer was the much acclaimed Lee Jeffries, famed for his series "Lost Angels"

A sense of universality

Khalife's father Marcel is also represented on the album in an adaptation of his "Madonna", a piece dedicated to children who have died young, its hallelujah phrases intertwined with the rhythms of Moroccan gwana. "The hallelujah does not belong exclusively to the West. It is sung in the churches of the East in Arabic, Aramaic and Assyrian. So for me there is nothing contradictory about combining a hallelujah with a gwana rhythm!" Khalife explains. It may also come as something of a surprise to find two lullabies on an album that is so evidently experimental. One of these is a version of an almost one-hundred-year-old French chanson, "Dors Mon Gas", that Bachar Mar-Khalife learnt from the family of his French wife. The other, the traditional Lebanese lullaby "Yalla Tnam Nada", features the singing voice of Iranian actress Golshifteh Farahani, in a version used in the film "Go Home". "It is a place to catch one's breath in the middle of the album," Khalife says. "There is always something painful for adults about lullabies. They express a sense of absence and we can find relevance to things that are happening in our lives now. It is this sense of current relevance, of universality, that is most important to me."

Explaining his music is something Bachar Mar-Khalife is not keen on. "I don't want to put any obstacles in the way of my listeners. Each of them should be able to discover their own inner exile." This inner exploration is also something he has chosen to reflect on the cover of the CD, where he is depicted in profile, though with one hand obscuring his features. The photographer was the much acclaimed Lee Jeffries, famed for his series "Lost Angels", which invested the faces of its homeless subjects with an almost spiritual intensity through the unusual use of lighting. Despair, anxiety about the future, thoughtfulness and introspection are all reflected in the picture, just as there are in the music of "Ya Balad". "The value of a good photograph can be measured by the humanity it breathes. It is non-verbal, not something you talk about," says Bachar Mar-Khalife. "And it is exactly the same with my music."

In the age of corona, Ankara's regional power strategy is twofold: on the one hand, Turkey is engaged in a charm offensive to revamp its political image, which has suffered lately ... END_OF_DOCUMENT_TOKEN_TO_BE_REPLACED

Albert Memmi, Tunisian author and pioneer of a sociology of de-colonisation, died on 22 May 2020 in Paris. He was nearly 100 years old. He was the last of a generation of Maghreb ... END_OF_DOCUMENT_TOKEN_TO_BE_REPLACED

Lebanon's economy is imploding and with it social stability. While the country’s politicians understand the depth of the crisis, they have used the coronavirus lockdown, argues ... END_OF_DOCUMENT_TOKEN_TO_BE_REPLACED

Despite his main focus being on his childhood and youth, spent between East and West, Riad Sattouf also describes the current state of the Arab world in his much-lauded graphic ... END_OF_DOCUMENT_TOKEN_TO_BE_REPLACED

Germany and other member states of the European Union are for the first time making use of the so-called INSTEX mechanism to circumvent the sanctions imposed on Iran by the United ... END_OF_DOCUMENT_TOKEN_TO_BE_REPLACED

Libyan political analyst Faraj Alasha argues that the Berlin conference on the Libyan war did nothing to change the fact that there is no political solution to end the war raging ... END_OF_DOCUMENT_TOKEN_TO_BE_REPLACED
Author:
Stefan Franzen
Date:
Mail:
Send via mail

END_OF_DOCUMENT_TOKEN_TO_BE_REPLACED
Social media
and networks
Subscribe to our
newsletter