The Egyptian Minister of Culture, Farouk Hosni, recently asserted that the growing number of headscarf wearers in Egypt must be taken as a sign of backwardness. An interview with Nabil Abdel-Fattah on the background behind the headscarf debate

Not all headscarf wearers are religiously motivated, says Nabil Abdel-Fattah

​​Why do you think the statements made by Cultural Minister Farouk Hosni provoked such a vehement public reaction?

Nabil Abdel-Fattah: There are several reasons. One is that the ruling National Democratic Party, which has a majority in parliament, and the Muslim Brotherhood in the opposition are currently haggling over the significance of religion for politics.

The reactions to the statements of the Culture Minister show that there is a consensus in favor of Islam being "nationalized" and its legal views attaining statutory authority. These opinions, however, come from people who think along missionary, admonishing lines and claim to represent the Islamic religion.

Today, we are dealing not only with the clergy, but also with a government that has taken on clerical characteristics like those familiar from other religions. With all due respect to the others, this contradicts Islamic tradition.

All of these groupings and institutions, and these missionaries, who are known as religious scholars, are currently trying to encroach on politics, to get hold of posts and pursue their own interests.

Now they've taken up the headscarf as pet issue. This is part of a strategy aiming at the Islamicization of private life and a preparatory step toward controlling public space as well. In the private realm, clothing choices are of vital importance, and the various clothing styles are part of how the religious phenomenon is being marketed. The headscarf, for example, is now subject to the dictates of fashion.

​​There are people who claim that wearing a headscarf is part of one's religious duties and that it is a fixed component of Islamic law. Others maintain that this is by no means obligatory, but rather a sign of the noble character of the wearer and one of women's individual freedoms. If a woman wishes to wear the veil, she should go ahead, they say, but whoever doesn't is completely free to make her own decision, as long she keeps within socially acceptable moral bounds.

What is especially questionable here is the attempt to force a view on others that at the most reflects a legal or missionary standpoint, and then to declare that this opinion is a duty prescribed by Islam and an element of the doctrines of the faith – with the result that the girl who doesn't wear the veil is regarded as standing outside the religion, as the president of Azhar University unfortunately put it.

I think that one should examine interpretations of the law with care, according to the motto: following Islam is easy, not difficult. In Islam, no one should be forced to do something, because religious freedom and the profession of faith based on conviction are the very principles of the Islamic religion. This is why no one can dictate what others should do and claim that only when they follow such dictates do they have the true faith.

After all, we live in a modern, civilized country and not in a state ruled by religious scholars and preachers. We have a constitution that grants women their freedom and the same rights that men enjoy.

The incidents in the Egyptian parliament show that advocates of religion and religious organizations are trying to undermine the secular state. They want instead to set up a state based on a particular ideology and to elevate their own interpretation of Islam to state doctrine.

This is extremely dangerous, because it spells the end of the idea of a secular Egyptian state and a modern Egypt, which has its roots in the diversity of the Egyptian heritage. These developments could end up hindering any attempt at reviving the cultural, political, ethnic and confessional multiplicity of the country.

How do you explain the fact that the number of headscarf wearers in Egypt has risen so steeply?

Abdel-Fattah: There are many factors at work here as well. For one thing, there is the politicization of religion and the attempt to bring certain ways of thinking to bear on the private realm. Headscarf wearers are by no means always religiously motivated. 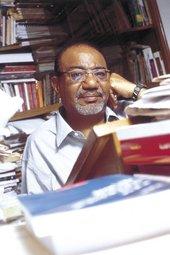 "After all, we live in a modern, civilized country and not in a state ruled by religious scholars and preachers," Nabil Abdel-Fattah says (photo: Khaled Habib/Egypt Today)

​​The headscarf was once a kind of protective social shield in the fight against poverty and pennilessness waged by the middle and lower-class workers and farmers. In the 1970s, therefore, a female medical student from the countryside would wear a veil since she didn't have the money to get her hair done at a salon or to buy chic clothing.

Now we are witnessing a brand new phenomenon. The headscarf is changing into a kind of social armor for decent girls from poor backgrounds, both in the country and in the cities; it is becoming a religious mask.

How else to deal with the corruption in Egypt? Corruption prevails in the services sector, and practically all other sectors of life as well, and everyone admits it, even the ruling class. So what we are dealing with here is a parading of pretended piousness, not an expression of personal religious conviction, because faith is at heart an individual experience.

Some claim that all the fuss about the headscarf has been staged to distract people's attention from unemployment, from the fact that Mubarak is planning to anoint his son as successor at the helm of government, and from other grievances.

Abdel-Fattah: I don't think that anything has been staged here. It is instead a serious mistake on the part of the parliamentarians from the ruling National Democratic party and the Muslim Brotherhood.

Nevertheless, this issue is in fact distracting the Egyptians from coming to terms with the future of the constitutional system of government as well as with the planned passing on of power from Mubarak to his son, an act that many hope will safeguard their own political, social and economic interests.

I think that the Muslim Brotherhood will end up paying a high price politically for what has happened in parliament. It has caused them to forfeit the sympathy of certain groups that wanted to integrate themselves into their organization.

The Egyptian Copts now fear that the Muslim Brotherhood could come to power, or that an alliance could be forged between their organization and some members of the National Democratic Party. After all, there really was a parliamentary majority in the headscarf debate when these members supported the Islamicization offensive launched by the Muslim Brotherhood.

Egypt's Hijab Debate
"Islam Is Not a Dress"
Earlier this month Egyptian Cultural Minister Farouk Hosni said that the headscarf is a "symbol of backwardness". The minister, who was quoted in an independent daily, said he was only stating his personal opinion and not a religious view. Reem Nada reports

The History of the Hijab
The Headscarf Is Not the Headscarf
Headscarves are often considered retrograde and repressive in the western world. However, the significance of the hijab has repeatedly undergone radical change over the years. Sabine Enderwitz provides an overview of its history

END_OF_DOCUMENT_TOKEN_TO_BE_REPLACED
Social media
and networks
Subscribe to our
newsletter