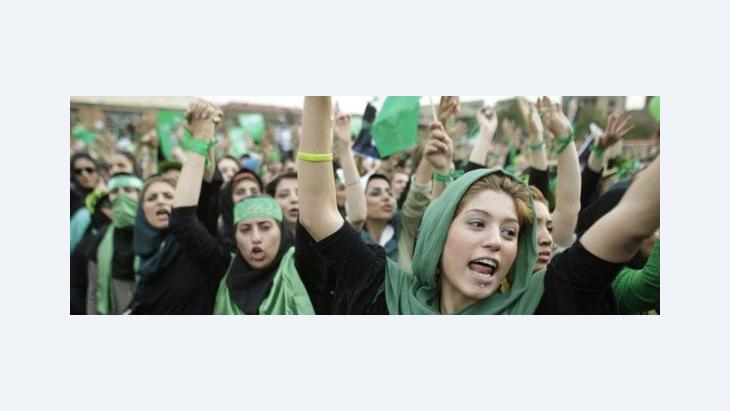 ﻿With their anthology on Iran's Green Movement, Nader Hashemi and Danny Postel provide an intellectual and political road map to the country's largest political protest since the 1979 revolution. Ramin Jahanbegloo introduces "The People Reloaded"

For the title of their new book, The People Reloaded, Danny Postel and Nader Hashemi borrow a concept developed by two Iranian intellectuals that exemplifies "the continuity of democratic struggle within Iran". As such, readers will not find in the Postel-Hashemi book a new attempt to describe the contemporary history of Iran. It is also more than a simple compilation of essays written by different Iranian and non-Iranian scholars and activists inside and outside Iran.

Postel and Hashemi provide us in this book with the most comprehensive coverage of the Iranian Green Movement studied and analyzed in an exceptionally concise and critical manner. While they touch on different aspects of the Iranian democratic movement since June 2009, their main concern is to shift our attention from the main issues surrounding Iran's nuclear program, which have dominated the analyses of Iranian politics for the past decade, to a discussion of Iranian civil society and its social, political and cultural potentialities.

Aside from this important shift of attention, this book brings to light the principal positions which have emerged in the Iranian society since the death of Ayatollah Khomeini and more specifically after the landslide victory of Khatami's election in 1997.

An explosion of democratic thought and action 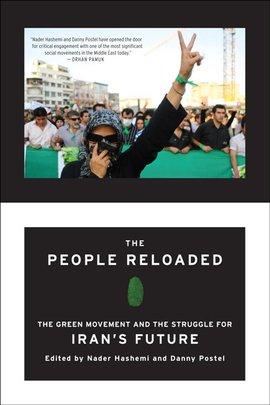 "Teaching courage and humility": The Green Movement remains the most promising indigenous democracy movement in the history of Iran, writes Jahanbegloo

​​For the hard-line conservatives and those who control all the means of violence in Iranian society (the Revolutionary Guards, the security services, the Basij), the two concepts of civil society and democratization are antithetical to the basic values and ideals of Islam and Iranian Revolution.

As for those who are in favour of a more tolerant, pluralistic and democratic order in Iran, the rise of civil society in Iran has been an explosion of democratic thought and action, which has created a "new unity of purpose" since the downfall of the Shah, among Iranians around the world. For Hamid Dabashi, a Professor of Iranian Studies and Comparative Literature at Columbia University in New York and contributor to this volume, "This movement is ahead of our inherited politics, floating ideologies or mismatched theories. We need to sit back and let this inspirational movement of a whole new generation of hope teach us courage and humility."

The Green Movement remains the most promising indigenous democracy movement in the history of Iran. A new generation of Iranians has been taking to the streets of Tehran and other cities of Iran clamouring for change and making themselves heard. One should not forget that in today's Iran, two out of three people are under 30 and they make up one-third of eligible voters in presidential elections.

It is true, however, that these youngsters pose little immediate threat to the regime, which has vast paramilitary and police resources, as well as significant rural political base, at its disposal. But given this segment of the electorate and the demographic nature of the Iranian public space, any future decision that disregards the hopes and opinions of the young Iranians would risk severely the very foundation on which the Islamic regime stands.

Articulating a new future for Iran

It is true that the widespread protests of the year 2009 have faded because of the brutality and cruelty of the Iranian government, but there is no shadow of doubt that the Green Movement will shape the future of Iran. In words of Nader Hashemi, the co-editor of this book and Professor of Islamic Politics at University of Denver, "The Green Movement's nonviolent orientation can best be affirmed by continuing to articulate a new future for Iran, one that makes a clear historical break from the violent past and which is rooted in lessons from other political struggles that have universal appeal, such as the anti-colonial movement in India, the African-American struggle for civil rights and the anti-apartheid struggle in South Africa."

Ramin Jahanbegloo: "By asserting the republican principle of popular sovereignty, the Green Movement has posed a counter-claim of legitimacy against the Iranian theocracy"

​​In other words, as a democratic learning community, the Green Movement is still in its formative process and as such, it is under permanent development. It is a self-institution and a self-formation which learns from its own errors. The effectiveness of the Green Movement rests, therefore, on self-organizing the Iranian civil society which insists on living in truth against lies.

Recent protests in Iran proved that the Green Movement has not died, despite a crackdown since the disputed 2009 presidential election. It seems that the uprisings in Tunisia and Egypt have reenergized Iranian civil society, helping it become firmer and more outspoken in its demand for democratization in Iran.

After twenty months of imprisonments, torture, executions, and house arrests of the opposition's key figures, the scale of the protests in Iranian cities contrasts profoundly with government affirmations that there is general popular support for the Islamic regime. Despite the incarceration of Mir-Hossein Mousavi and Mehdi Karroubi, the voice of protest has not been silenced in Iran. Once again, pro-democracy demonstrations in Tehran and other Iranian cities have eroded the image of the regime as the vanguard of the resistance against oppressors in the Muslim world.

The recent revolts of the Arab streets against corrupt dictatorships in Tunisia, Egypt, Libya, Algeria, Jordan, and Bahrain were more synchronized with the pace and rhythm of nonviolent demonstrations in Tehran than with the violent actions of truncheon-wielding Basiji thugs.

The forward march of history

The Iranian regime's anti-democratic domestic policies are steadily sweeping away its legitimacy as "popular" and "Islamic". According to Said Amir Arjomand, professor of sociology at Sony Brook University, "The ayatollah-dictator and the Revolutionary Guards have tried their best to discredit their opponents by concocting, through forced confessions at show trials, a conspiracy of regime change based on a "velvet revolution" produced by 'Western social sciences'. Deep down they know there is no conspiracy. The fear is grounded in what they see in front of them: the forward march of history." 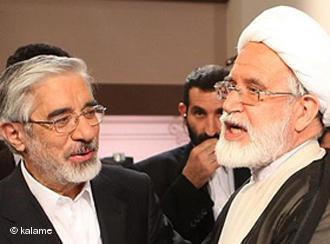 "The voices of protest": Both Mir-Hossein Mousavi and Mehdi Karroubi have been under house arrest since February, when they tried to lead marches in solidarity with the democrats of Tunisia and Egypt

​​What is certain is that the current power holders have lost moral credibility by virtue of their brutal crackdowns on Iranian civil society. Moreover, by asserting the republican principle of popular sovereignty, the Green Movement has posed a counter-claim of legitimacy against the Iranian theocracy.

The ultimate question which remains is: if the Iranian political system cannot be reformed in a peaceful and nonviolent way and through the ballot box because of its failure to heed to popular demand for change, then what is left of the Iranian dream of democracy? Maybe the Iranians would have to wait another generation for this dream to become reality. Nader Hashemi and Danny Postel's book certainly takes a comprehensive and consistent approach to this question.

Ramin Jahanbegloo is an Iranian philosopher who is currently teaches at the University of Toronto as a professor of political science. In 2006 Jahanbegloo was arrested by the Iranian regime and released after four months. In 2009 Jahanbegloo became the winner of the Peace Prize from the United Nations Association in Spain for his extensive academic works in promoting dialogue between cultures and his advocacy for non-violence.

Nader Hashemi teaches Middle East and Islamic politics at the Josef Korbel School of International Studies at the University of Denver. He is the author of Islam, Secularism and Liberal Democracy: Toward a Democratic Theory for Muslim Societies.

Danny Postel is the author of Reading "Legitimation Crisis" in Tehran: Iran and the Future of Liberalism. He is the editor of The Common Review and also works as communications coordinator for Interfaith Worker Justice.

When is it and when is it not acceptable to display a political banner at the World Cup in Qatar? The answer seems to depend largely on the political message, with fans ... END_OF_DOCUMENT_TOKEN_TO_BE_REPLACED

The Kurds are under attack from two sides: from Turkey, and from Iran. The situation in their territories in northern Iraq is becoming increasingly desperate. Birgit Svensson ... END_OF_DOCUMENT_TOKEN_TO_BE_REPLACED

Iranians do not want an Islam that interferes. They are fed up with a system that manipulates people with simple promises of salvation and anti-Western propaganda. Islamic ... END_OF_DOCUMENT_TOKEN_TO_BE_REPLACED

"The Voice of Dust and Ash" draws us into the life and times of Iranian maestro Mohammad Reza Shajarian with passion and joy, focusing on the man who stood, and still stands, for ... END_OF_DOCUMENT_TOKEN_TO_BE_REPLACED

November 2022 sees the Arab world firmly in the spotlight with the COP27 in Egypt and the FIFA World Cup in Qatar. Public trust in MENA governments is weak, thanks to their ... END_OF_DOCUMENT_TOKEN_TO_BE_REPLACED

In Iran, two famous actresses, Hengameh Ghaziani and Katayoun Riahi, were arrested recently. These days anyone who shows solidarity with the protesters is a target to be silenced ... END_OF_DOCUMENT_TOKEN_TO_BE_REPLACED

Comments for this article: The Green Movement and the Struggle for Iran's Future

The bias of anti-Iran essay from Qantara is quite evident. And it is well-known that green revolution which began in 2009 to overthrow democratic Iranian government was planned,orchestrated and implemented from Tel Aviv, Washington DC, London to an extent Brussels, to throw this pro-people regime. Qantara has no inclination to publish about protests in Bahrain and Yemen. Well, i am neither a fanatic nor a pro-Iran, but rather who would like to distinguish truth from falsehood. And the global power elite has been installing their own puppets across the world to serve their colonial masters and my country in South Asia is no exception where corruption is rampant that a staggering 77% of population less than $2 a day, thanks to an institution called demo(n)-crazy.

END_OF_DOCUMENT_TOKEN_TO_BE_REPLACED
Social media
and networks
Subscribe to our
newsletter