The 1959 novel Children of the Alley by Nobel Prize laureate Naguib Mahfouz has appeared for the first time in Egypt, but with a preface by the moderate Islamist Kamal Abulmagd. Ahmad Faruk reports on this controversial edition

The 1959 novel Children of the Alley by Nobel Prize laureate Naguib Mahfouz has appeared for the first time in Egypt, but with a preface by the moderate Islamist Kamal Abulmagd. Ahmad Faruk reports on this controversial edition 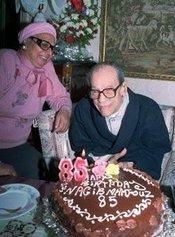 After over forty years, the book Children of the Alley is finally published in Egypt. What happened to the freedom of expression, critics ask with concern

​​When Naguib Mahfouz received the Nobel Prize for literature in 1988, the Swedish academy expressly referred to the novel Children of the Alley. But this still did not permit Mahfouz to publish his novel in Egypt. He felt compelled to abide by the promise he made thirty years ago to the Egyptian president at the time, Gamal Abdal Nasser.

Children of the Alley appeared in 1959 as a serial novel in the state newspaper Al Ahram. The novel offended religious scholars and political personalities at the time.

In the book, Naguib Mahfouz addressed the same subjects as in his earlier works, from the life of the average little man in Cairo to the big questions of human existence. The story grapples with salvific history. The main characters can be interpreted as the prophets Adam, Moses or Muhammad.

Agreement with the president

Prominent religious scholars at the Al Azhar University wrote internal reports condemning the novel, and these reports are still referred to today by the highest religious authority in Egypt. But associates of then-President Abdal Nasser also denounced the book at the time. They interpreted the main figures not as prophets but as representing the president himself and the members of his Revolutionary Command Council.

Gamal Abdal Nasser made an agreement with Mahfouz at the time, according to which the novel could only be published in Egypt if the Al Azhar University gave its permission and if a preface by a religious authority were appended.

Thereafter, Children of the Alley could only be found at bookstores and newsstands as a pirated copy from the Lebanese publisher Dar Al Adab.

Mahfouz continued to respect the agreement with Abdal Nasser even after a young radical Islamist attempted to assassinate the Nobel Prize winner in 1994. One motive cited for the assassination attempt was the controversial 1959 novel. Even when an oppositional Egyptian newspaper began to publish the novel in protest to the attempt on his life, Mahfouz was against it.

The new edition of the novel with a foreword by the moderate Islamist Kamal Aboulmagd has been criticized by many Egyptian intellectuals. Author and journalist Mahmud Al Wardani sees a dangerous precedence being set. Mahfouz's wish to obtain the permission of Al Azhar and include the foreword by an Islamist should not have been conceded because no religious authority should have control over literature, says Al Wardani.

Literary critic Muhammad Badawi sees the affair as part of the struggle between the independence of the artist and the religious institution's control over art. But he also sees something very positive. The foreword by Aboulmagd will lend the critical novel greater acceptance among worldly Islamists. And this is an important gain!

The first Egyptian edition of Children of the Alley was published by Dar Ash Shuruq, one of the largest private publishers in Egypt. The organization is spearheaded by Ibrahim Al Muallim, who is also president of the Arabic Publishing Association. He bought the rights to Mahfouz's entire oeuvre.

Al Muallim didn't have a problem with appending an introduction by an Islamist and gaining the permission of the Al Azhar University in order to publish this novel critical of the Islamic religion. He is, after all, the publisher of prominent Islamists such as Fahmi Huwaidi and Yusuf Al Qaradawi.

Remebering Naguib Machfus
Rendezvous at Café Ali Baba
Swiss publisher Lucien Leitess was one of the first people in Europe to recognise Naguib Mahfouz's literary genius. In this article, he tells of the excitement of his first encounter in Cairo in 1989 with the now deceased Nobel Laureate

Naguib Mahfouz's "Intoxication"
Drunk with Resignation
Naguib Mahfouz has been praised by many as a 'Dickens of the Cairo cafés' and the 'Balzac of Egypt'. Now the Nobel laureate's 1965 novel Al-Shahhad has been translated into German. Read Fahimeh Farsaie's review of a novel about the mid-life crisis of an Egyptian lawyer
Arab Literature in Translation
Listen to What the Arab World Has to Say
In a world in which translations of literary works are getting more and more important for the understanding of other cultures, there are distinct gaps in most European book markets when it comes to know creative writing from other countries. This is particularly true for the literature of the Arab World, writes Peter Ripken

END_OF_DOCUMENT_TOKEN_TO_BE_REPLACED
Social media
and networks
Subscribe to our
newsletter