Pomegranates and Myrrh is a crowd-pleasing Palestinian feature film about day-to-day life in the shadow of the Middle East conflict. Antje Bauer saw the film and spoke to the female film-maker, Najwa Najjar

Pomegranates and Myrrh is a crowd-pleasing Palestinian feature film about day-to-day life in the shadow of the Middle East conflict. Antje Bauer saw the film and spoke to the female film-maker, Najwa Najjar

​​ We see a man driving to his wedding. The dilapidated Mercedes has been spruced up with bougainvillea blossoms to mark the occasion. The groom and his party have not far to travel, a half-our drive from Ramallah to Jerusalem. The only problem is that they have to cross a border, an Israeli checkpoint, at which young arrogant or bored soldiers will be waiting to check their papers, special permits for entering Jerusalem.

At this point, cinema-goers generally expect the passengers of the dented Mercedes not to have the right papers with them and for this discovery to be followed by loud shouting and exchanges of gunfire at the checkpoint - something worthy of the drama of the situation in the Middle East. Nothing of the sort happens.

Running the gauntlet on a daily basis

The occupants of the vehicle hand over their papers and fix their eyes in silence on the soldiers in the way Palestinians at checkpoints almost always do. When the car is waved on, the mother of the groom says pointedly from the back seat that they will be late for the ceremony and anyway it is just not fitting for a groom to be driving to the bride; tradition has it the other way round. Typical mother.

It is scenes like this that make the film Pomegranates and Myrrh, the most recent film by female film-maker Najwa Najjar, so credible. When it comes to capturing the Middle East conflict on film, it is generally the Israelis that include self-irony and criticism of their own society in their films.

The few Palestinian films that do deal with this theme, on the other hand, generally take themselves seriously and are deeply political, thereby confirming the impression that already exists in the West, namely that Palestinians have no life outside the conflict and that Palestinians are either full-time victims or full-time perpetrators.

Initially, the film focuses on a love triangle: the newly-wed bride, Qamar, becomes more intimately acquainted with her dance teacher, Qais, while her husband does time in an Israeli prison. But it is also a story of emancipation: Qamar overcomes the resistance of her family, which does not want her to continue dancing, despite the fact that it is not considered fitting for the wife of a prisoner to do so.

A story about strong women

It is a story about strong women. Qamar is not the only leading female role in the film; there is also the single mother Umm Habib who runs a coffee house, despite the fact that women don't belong in coffee houses. And yet, despite all this, the film is also a political story: the family's land is confiscated by Israeli soldiers.

Whether it focuses on Qamar's negotiations with her family about her freedom, or the debates within the family as to whether they should accept the confiscation of their land to ensure that Zaid is released sooner, or the barely noticeable growing intimacy between Qamar and Qais, the tone of the film is gentle and subdued and the scenes are unspectacular.

The film avoids all obvious manifestations of violence: when Zaid is beaten up in prison, the viewer sees nothing but shadows. "I didn't want my film to be a violent film of the kind you see in cinemas," explains Najwa Najjar. "Zaid and everything he went through was important for me. We have all seen violence before. And so have the viewers." 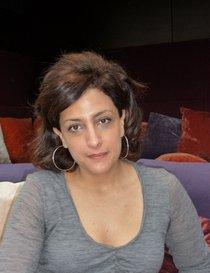 Najwa Najjar: "Culture is the soul, the heart-beat of a nation. It is what remains when politics fails." (photo: Antje Bauer)

​​ This is exactly why this film, which is not ostensibly political, stirs the viewers' conscience so often. Take, for example, the scene showing the quiet determination of the settlers who strap machine guns to their bodies and set up tents on the family's land, or the constant presence of Israeli soldiers, whether it be at checkpoints or in the streets of Ramallah. Anyone who has been in the occupied territories in recent years knows that this is an accurate representation of life there: the omnipresence of the occupying forces, the helplessness of the Palestinians, and their attempts not to spend their lives being full-time victims and not staring at the occupying forces like a frightened rabbit stares at a snake.

"We are not what you see on television," explains Najjar. "There is a feeling of solidarity, of holding together, among many Palestinians. While there are political problems with Hamas and Fatah and the things that are happening in the country, these political disputes are the result of the fact that there is a lack of vision for the future. Among Palestinians themselves, however, there are not as many conflicts."

The fact that Qamar does not want to stop dancing and insists on culture in her life while everything around her becomes politicised, is also an expression of the political disillusionment of the young film-maker.

"I think that culture is the soul, the heart-beat of a nation. It is what remains when politics fails. Politics is leading us nowhere. So at least leave us our culture. That, at least, is something we can pass on to future generations."

Eran Riklis: "Lemon Tree"
A Revolt by the Weak
The new film by Israeli director Eran Riklis addresses the Israeli-Palestinian border conflict with biting humour and has already caused a furore at this year's Berlinale Film Festival. Jochen Kürten has seen "Lemon Tree"