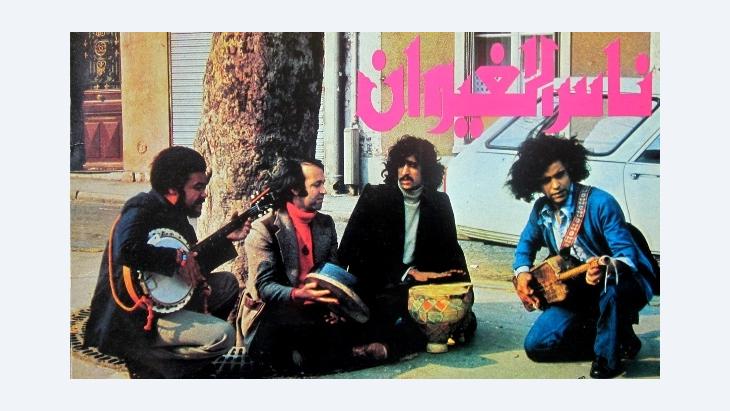 Troubadours of the Old and New Morocco

﻿For decades now, Nass El Ghiwane have fascinated audiences with their individual stylistic blend of Gnawa trance music and social protest songs. Their popularity is such that they've been dubbed the "Moroccan Beatles". Andreas Kirchgäßner profiles the group

The stadium in Agadir is rocking. Long-haired youths tear off their T-shirts, waving them to the music like flags. People dance in a crush, pushing against the lines of soldiers and policemen trying to force them back. A girl slips bravely through the cordon, jumps between the musicians. She dances with them for a moment before the marshals pull her off the stage. But after the final chord, there's no holding them back. The youngsters storm the barriers, grab instruments, fly at the musicians. The plump Moroccan girl is back, and stands in front of Larbi Batma as he's leaving the stage, tying her scarf around his neck…

Impressions from the wild 1970s. And indeed, with their Beatles-style haircuts and flared trousers the Moroccan musicians looked just like contemporary rock stars. But listen closely and something doesn't seem quite right: there's no howling electric guitar, no huge drum set. The instrumentation was sparse, some pieces were only sung and accompanied by rhythmic clapping. 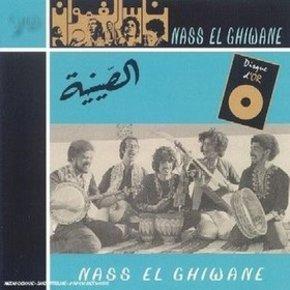 ​​Then the musicians again brought out traditional instruments: the harraz, the cup-shaped drums of itinerant musicians and beggars, the tbila drum of the Sufi brotherhoods, covered on both sides, the framed drums of the Jilala and Aissawa and the gembri, the percussive bass of the Gnawa musicians.

They did indeed use these instruments to play the music of the traditional Sufi brotherhoods, the Jilala, the Hmadcha, but above all the trance music of the Gnawa. But they had composed new lyrics, partially in the style of religious Sufi poetry, but always infused with courageous directness and social brisance.

In the educated Morocco of the 1960s and 70s, which had its cultural centre in Fez, this music was regarded as primitive and backward. After all, it was often used to conjure up spirits in healing ceremonies developed by popular Islam.

Instead, Moroccan radios broadcast overblown emotional music or the noble tones of zither and violin. It was already a sensation in itself that four musicians played their own songs and lyrics on traditional instruments – an approach that soon packed the biggest venues and stadiums in Morocco.

In June 1971, they were the warm-up act before a performance by the Radio Orchestra at the National Theatre in Rabat. But the audience didn't allow the orchestra – with its classical Arab and western orientated repertoire – onto the stage, celebrating instead the music of Nass El Ghiwane. They were henceforth hailed in the Moroccan media as "the Moroccan Beatles".

In the late 1960s, four young men from the working-class district of Hayy al-Mohammadi in Casablanca joined a theatre group and provided a musical accompaniment on traditional instruments to the socially critical plays. They were an instant success, and soon formed the group "Nass El Ghiwane". The addition of the banjo to their ensemble made the group the first in Morocco to modernize traditional music.

The "Ghiwane" musicians that gave the group its name were the troubadours of old Morocco, members of traditional Sufi brotherhoods who used music to convey the latest news, religious messages and entertainment to the people.

Not long after independence, in the midst of the worst economic crises and harshest political repression, the group mixed popular Sufi music with their own texts. Nass El Ghiwane was the first-ever Moroccan group to denounce the misery of the young and disenfranchised, despotism and omnipresent corruption:

"Oh, what a miracle! Our summer has become winter … The rulers' tyranny becomes all the more oppressive, their despotism more brutal." (Excerpt from Nass El Ghiwane: "Subhan allah")

Although they originated from the leftwing intellectual student milieu of their time, they were not flying any particular political banner, but expressed through song their desperation, their hopelessness and the isolation of the young man who came to the city from the country. 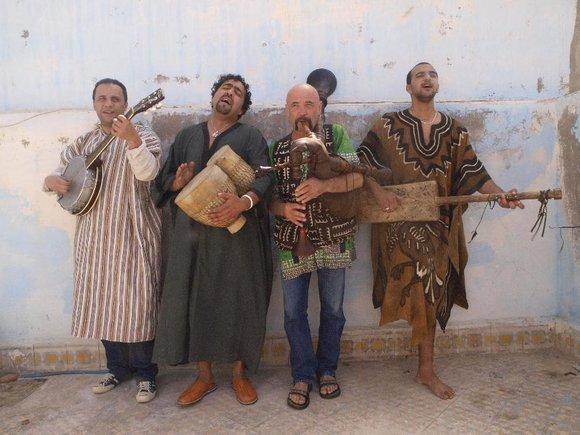 Musical legacy: Paco's son Youness Paco (second from left) joined forces with his brother Yassine and the banjo player Rachid (first from left) to form the group "Paco El Ghiwane", which sees itself as the successor to the legendary "Nass El Ghiwane"

​​ But through Sufi music they also celebrated something lacking in the western student movement, but which to this day remains an integral part of all Arab protest: a religious fervour that turns to Allah for help. Gnawa music, the legacy of black African slaves in Morocco, still played in the African jazz pentatonic, still interfused with strange words of Bambara and Wolof, in turn mirrored the feelings of the young, the disenfranchised and persecuted. They too perceived themselves as slaves of repression.

In 1974, the young gembri player Aberrahman Paco came from the traditional Gnawa stronghold of Essaouira to join Nass El Ghiwane, thereby further strengthening the influence of black African healing and trance music on the group. The fact that Gnawa music now enjoys pop status across Morocco is due to Nass El Ghiwane.

But after almost 20 years, in 1993, Paco withdrew from the furore surrounding Nass El Ghiwane and returned to his roots: the Gnawa cult in Essaouira. He suffered a stroke there a few years ago, and has been bed-ridden ever since. He has however passed the musical baton to his son Youness Paco, who played with Nass El Ghiwane as a young boy.

Morocco and the Arab Spring

I meet Youness in the port city of Essaouira, where he founded the group "Paco El Ghiwane" with his brother Yassine and the banjo player Rachid from Marrakech. But the student movement is no more, and socialist models appear to have been enduringly discredited.

But Arab society is showing itself to be anything but paralysed. Suddenly young people are organising themselves on Internet forums, filling the streets with people. Morocco is not spared. Although the young King initiated hurried constitutional reforms, demonstrations also began here. After all, the King continues to be the unchallenged ruler of the land and parliament, and abuse of office and corruption on all levels persists.

I push for a response from the musicians to the political events of the Arab Spring. Of course, they welcome Ben Ali's resignation, Mubarak's ousting, the removal of Gaddafi and the rebellion against Assad in Syria.

But Youness' response to developments in Morocco and the "February 20 Movement" is very cautious: No one wants to question the authority of King Mohammed VI., who is also the nation's religious leader. 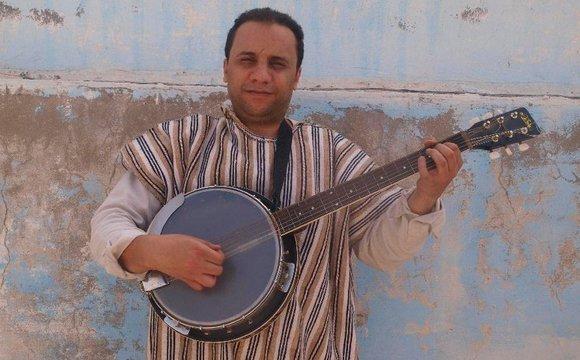 ​​As far as the musicians are concerned, the problem is corruption within the ranks of advisers and parliamentarians. This is why a movement such as "February 20", which calls for greater parliamentary democracy, is garnering little support beyond the economic metropolis Casablanca. Instead, even the smallest "February 20" demonstration is followed by a massive counter-rally in support of the King.

But Rachid, who arrived from Marrakech during the night, has driven away his fatigue with a few brisk banjo solos and is now on a roll. His entirely unsatisfactory predicament in which he, a talented musician, is forced to take on exhausting, badly paid jobs, makes him sick. Yes of course there are musicians in Morocco who can earn a good living from their performances.

But they had connections that he, Rachid, doesn't have. That's corruption in Morocco: without friends in high places, artists can either starve or give up on their craft. He plays a few runs on the banjo in an attempt to dispel these gloomy thoughts. The lyrics of Nass El Ghiwanes appear to be more relevant than ever:

"Oh you jailers! Open the doors of the prisons … Oh you rulers! Cease your barbarity." (Excerpt from Nass El Ghiwane: "Al-Samta")

EU parliamentarian Dietmar Koester criticises the Union's failure to speak up when faced with human rights abuses committed by its Middle Eastern allies, while pointing out that ... END_OF_DOCUMENT_TOKEN_TO_BE_REPLACED

Even though Meryem Alaoui's debut novel "Straight from the Horse's Mouth" centres on a female character working in a field – sex work – that is often, at least in Arabic ... END_OF_DOCUMENT_TOKEN_TO_BE_REPLACED

Morocco is aiming to enshrine Judaism as part of its national identity: the "House of Memory" in Essaouira is one step towards realising that goal. The nation’s Jewish legacy has ... END_OF_DOCUMENT_TOKEN_TO_BE_REPLACED

Mass protests began in Egypt on 25 January 2011. They triggered the overthrow of long-time ruler Mubarak. Ten years later, many human rights activists and journalists are in ... END_OF_DOCUMENT_TOKEN_TO_BE_REPLACED

Mass protests began in Egypt on 25 January 2011. They triggered the overthrow of long-time ruler Mubarak. Ten years later, many human rights activists and journalists are in ... END_OF_DOCUMENT_TOKEN_TO_BE_REPLACED

Ten years after the start of the Arabellion in North Africa and the Middle East, many view the movement as a failure. But rather than being over, it has now entered a more mature ... END_OF_DOCUMENT_TOKEN_TO_BE_REPLACED
Author:
Andreas Kirchgäßner
Date:
Mail:
Send via mail

END_OF_DOCUMENT_TOKEN_TO_BE_REPLACED
Social media
and networks
Subscribe to our
newsletter