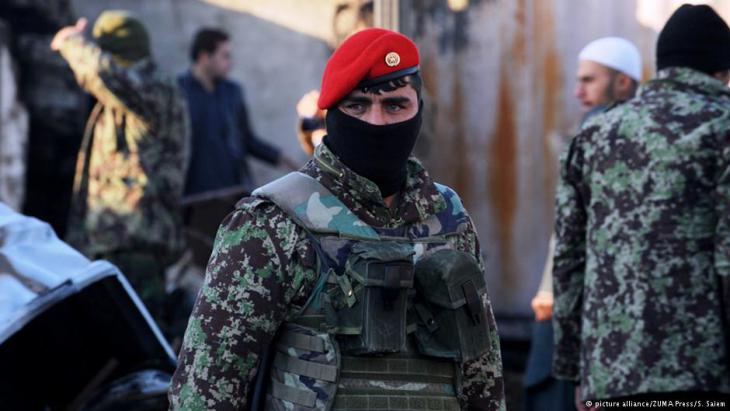 2015 was a troubled year for Afghanistan. With the Taliban and IS achieving temporary success within the country, NATO was forced to revise its troop withdrawal plans. A report by Waslat Hasrat-Nazimi

The Afghan security forces were expected to assume full responsibility for defence and security within their country for the first time this year. At the end of 2014, NATO's combat mission concluded, leaving its follow-up mission "Resolute Support" to merely observe, advise and train the Afghan army. For this mission, more than 10,000 NATO troops remained in Afghanistan. 850 of the soldiers were provided by the German military.

While Afghan forces were taking the reins on ensuring peace and order within the country, initiatives for a peace process with the Taliban were being pushed forward. In the spring of 2015, it looked as though the peace talks were off to a good start, but these hopes were soon dashed.

The announcement of Taliban leader Mullah Omar's death signalled an end to the Taliban peace talks. The confirmation of the death of Taliban leader Mullah Omar ended the first fragile successes of the initial peace talks. It was said that Omar - who supposedly died in 2013 - campaigned for the talks and supported them as long as they involved the conclusion of the NATO mission in Afghanistan. After the Afghan government announced his death - and the Taliban confirmed it - in July of 2015, the basis for the peace negotiations fell apart.

The new leader of the Taliban, Mullah Akhtar Mansour, rejected a rapprochement between the parties. Despite numerous rumours about an internal rift in the Taliban - some of its fighters supposedly refused to recognise Mansour as their leader - the militant group proved its strength by increasing the number of attacks. According to a semi-annual report from the UN, the number of casualties reached a new peak in 2015. Around 5,000 civilians died as a result of the violence in the first half of the year. 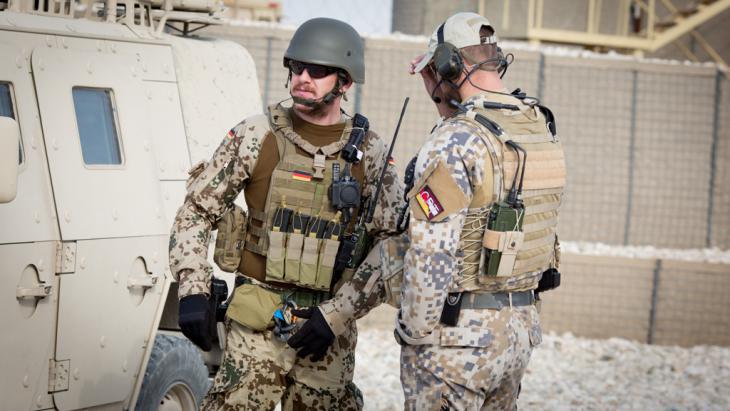 Hopes of withdrawal fading fast: on 17.12.2015, the German Bundestag extended and expanded the German armed forces′ training mission on the Hindu Kush. As a result, armed German soldiers are to continue their involvement in the NATO "Resolute Support" mission until the end of 2016 at the earliest; the number of troops has been increased from 130 to 980

"The fact that the Taliban was able to weather so many challenges this year - particularly a difficult leadership transition - will give it confidence for the next year," argued Michael Kugelman, a South Asia expert at the Washington-based Woodrow Wilson Center. "At the end of the day, the Taliban still has two things working in its favour: a continued relationship with Pakistan, which will afford it sanctuary - and an Afghan government perceived as weak and ineffective, which could help spark recruitment,"  said Kugelman.

Despite many previous signs of a deteriorating security situation in the country, the fall of the provincial capital of Kunduz in northern Afghanistan signalled a turning point in the eyes of NATO. For a few days (from 28 September until 13 October), parts of this strategically-located city were in the hands of the Taliban. Images of fleeing Afghan security forces were seen around the world. The Taliban took triumphant selfies with locals in Kunduz and patrolled the streets in state police cars. According to the UN, around 850 people were killed. The fall of Kunduz was a serious blow to the morale of the Afghan military and the police.

With the temporary fall of Kunduz, it became obvious that Afghanistan is not in the position to defend itself. "I'm quite sure that the fall of Kunduz, as well as the growing threat of IS in Afghanistan, figured prominently in President Obama's decision to halt the US troop withdrawal," commented Kugelman.

For its part, the German government wants to increase the number of troops stationed in Afghanistan to 980 next year. For Thomas Ruttig, co-director of the Afghanistan Analysts Network, this figure is by no means sufficient. "To only slightly increase the number of soldiers in Afghanistan and to only do a little more than what had been done before is inadequate. It fails to address the real problems." In addition to massive problems on the security front, the country is also afflicted by a raft of social, economic and institutional challenges, Ruttig said. 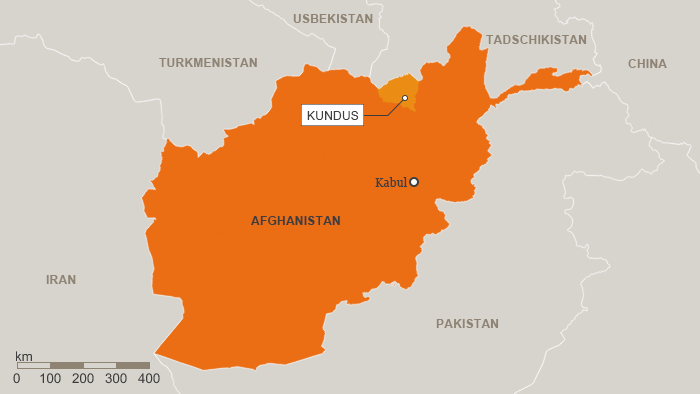 Taliban target: the provincial capital Kunduz in northern Afghanistan was overrun by the Taliban last September and only retaken by the Afghan army following days of fierce fighting. It was the Taliban′s greatest victory since they were toppled in 2001. The government in Kabul accused Pakistan of helping the rebels in their assault on Kunduz. For years, Kabul has suspected its neighbour of using the Taliban as a means of influencing developments in Afghanistan

A consequence of this precarious state of affairs is the exodus of huge numbers of Afghans seeking better lives elsewhere. In 2015, over 140,000 Afghans fled to Europe, a majority of them to Germany. According to the German Federal Office for Migration and Refugees, more than 31,000 refugees from Afghanistan were registered in November, alone. After the Syrians, the Afghans are now the second largest group of asylum seekers.

"We are doing everything in our power so that Afghans do not believe it is necessary to leave the country," Sayed Zafar Hashemi, spokesman for Afghan President Ashraf Ghani, recently commented. In a recent interview, President Ghani said the refugees in Europe wouldn't become more than "dishwashers." He emphasised, that it is not possible for refugees to economically rise in Europe and the only chance for a career lies in Afghanistan.

For Alexey Yusupov, director of the Friedrich Ebert Foundation in Kabul, this trend towards fleeing Afghanistan originated from tactically circulated misinformation from human smugglers and lenders. "It is not only about rhetoric, but it is also about concretely and actively tackling these networks," said Yusupov. Until now, these measures have failed as more and more people continue to flee Afghanistan. "People need to realise that they can change their living conditions for the better, so that they will stay," he asserted.

The Afghan government has developed programmes which will attempt to tackle this issue in the coming year. One example is a project called "Jobs for Peace," an initiative supported by Germany, which will create jobs in Afghanistan. Only time will tell whether or not the feeling of hopelessness can be averted in 2016.

Rumi's poems, though generally stripped of their Islamic symbolism, are hugely popular around the world. Yet Islamic mysticism is still very much at the heart of these verses. ... END_OF_DOCUMENT_TOKEN_TO_BE_REPLACED

Very different Western reactions to the suffering in Ukraine and the Arab world show that there is a profound rift among cultures. Essay by Michael Young END_OF_DOCUMENT_TOKEN_TO_BE_REPLACED

The documentary "Nadia" tells the incredible story of Nadia Nadim, who was forced to flee from the Taliban as a child and became a football star. By Annabelle Steffes-Halmer END_OF_DOCUMENT_TOKEN_TO_BE_REPLACED

Three award-winning female directors appeal to the international film industry to save Afghan cinema. Supporting women filmmakers is more important than ever. By Christine Lehnen END_OF_DOCUMENT_TOKEN_TO_BE_REPLACED

Russia's ranking on the World Press Freedom Index has fallen again over the Kremlin's wartime censorship of the Ukraine conflict. From Myanmar to Mexico, journalists continue to ... END_OF_DOCUMENT_TOKEN_TO_BE_REPLACED
Author:
Waslat Hasrat-Nazimi
Date:
Mail:
Send via mail

END_OF_DOCUMENT_TOKEN_TO_BE_REPLACED
Social media
and networks
Subscribe to our
newsletter