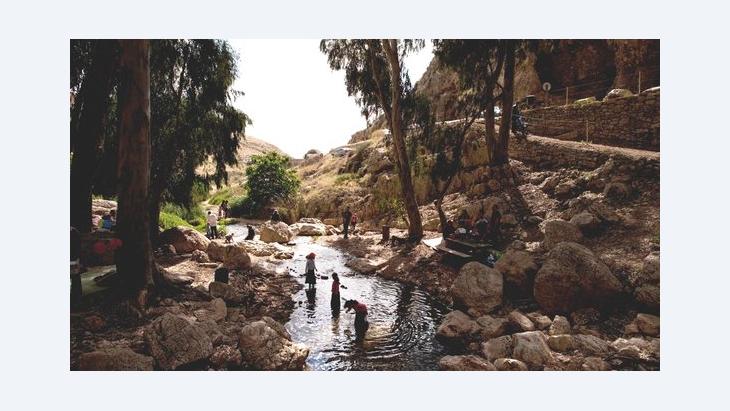 Only a few minutes' drive from both Jerusalem and Ramallah lies Ein Prat (Wadi Qelt), a beautiful picnic site that is frequented by both Israelis and Palestinians. According to Ruth Eglash, this site of natural beauty has the potential to become an oasis for peace in a troubled region

﻿At first glance, Ein Prat, one of the many natural and historic sites hidden in the northern Judean Desert, looks like any other picnic site around the world.

Large wooden tables and long benches are located strategically under shady trees on either side of a bubbling brook. Clusters of friends and family relax and enjoy each other's company in the natural surroundings.

What sets Ein Prat – or Wadi Qelt, as it is known in Arabic – apart from other parks is that it is one of the few Israeli-run sites that Israelis and Palestinians can access equally, and that it has the potential to become an oasis for peace.

The park is a few minutes' drive from the Jewish neighbourhoods in Jerusalem's northern suburbs and it is almost equidistant from the Palestinian city of Ramallah. Those that descend on the park each weekend seem determined not to allow decades of occupation, violence or mistrust to stop them from enjoying its natural delights. 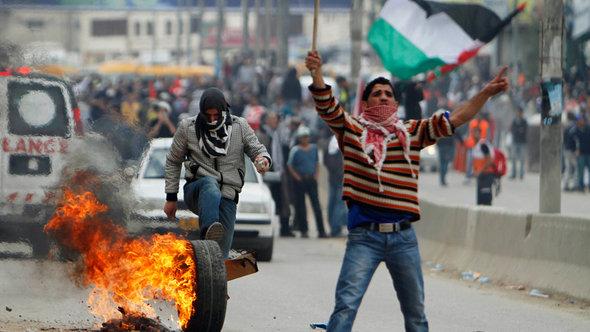 Only a short drive away yet seemingly world's apart: Ein Prat/Wadi Qelt is a haven of tranquillity that is almost equidistant from Jerusalem and Ramallah, where this Palestinian protest took place in March 2012

Surprisingly for the region, and unlike other places where Israelis and Palestinians come into close contact, there are no violent confrontations, angry words or accusations at Ein Prat/Wadi Qelt.

And, despite the fact that tension does hang somewhere in the air between the smoky barbecue grills and the intoxicating smell of water pipes, it is hard at first glance to differentiate between Jews, Muslims and Christians as they chit-chat and consume delectable ﻿local fare such as hummus, pita and kebabs.

True, there is little interaction between the two groups, and there seems to be an unwritten agreement between the Israelis, who speak only Hebrew, and the Palestinians, whose mother tongue is Arabic, to treat each other like ghosts. And while this lack of interaction should not be mistaken for the simple politeness of strangers giving each other some space, it is a step forward.

The fact that Israeli and Palestinian children splash side-by-side in the natural pools and grown-ups seek relief together from the heat by wading through the cool waters suggests a glimmer of hope and the possibility of breaking down the growing barriers between the two peoples.

One of the main attractions of the park is a large natural pool half way up the mountain ravine. It is here – when the people have left the comfort of their separated picnic tables – that Israelis and Palestinians sit face-to-face around the perimeter of the cool, refreshing water.

Among the splashes of water and squeals of delight, members of the two groups eye one another, trying to determine if their so-called enemies are actually human beings or not.

Are we really all that different? In the natural light of this park, it seems not. 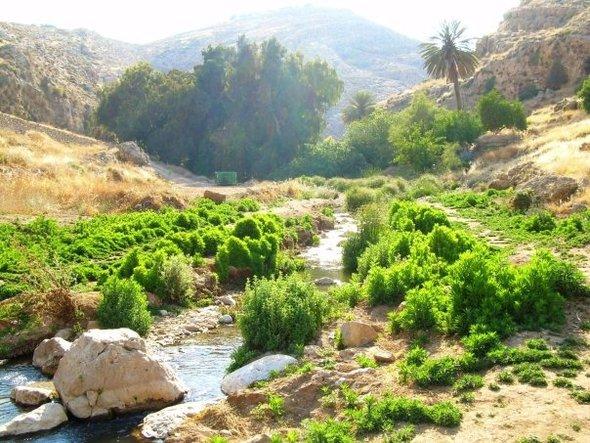 The ideal place for a peace summit: although she feels that it is unlikely that politicians on either side of the divide would exchange their suits and ties for swimming gear at a negotiation, Ruth Eglash feels that perhaps this "desert oasis" is a place where "those who appreciate the beauty of nature can find a way to make peace"

Respite from the madness

Through the stolen glances, there are some coy smiles and kind gestures. There mostly seems to be an acceptance that all are not only looking for some relief from the scorching midday sun, but also from the madness of an on-going conflict that affects our daily lives.

For just a moment, this park seems to be an ideal place for a peace summit. The thought of our respective leaders dipping into the cold water after negotiating each complicated point in this conflict suddenly seems entirely plausible. Perhaps the shock of the freezing water against burning skin and the realisation that the land we are fighting over has been here much longer than any of the humans now inhabiting it might actually be enough to convince them that fighting and violence, oppression and occupation are not the way to preserve this land for future generations.

While the idea of politicians ditching their suits and ties for swimming gear seems less plausible than their coming together at a negotiating table, the reality is that here in Ein Prat/Wadi Qelt, ordinary Israelis and Palestinians do have a rare chance to meet. And although years of conflict have made us wary of one another, maybe it is in this desert oasis that those who appreciate the beauty of nature can find a way to make peace.

Ruth Eglash is deputy managing editor at The Jerusalem Post in Israel.

German Middle East analyst Guido Steinberg and television journalist Ulrich Tilgner have both published new books on the conflicts in the Middle East. Their analyses and their ... END_OF_DOCUMENT_TOKEN_TO_BE_REPLACED

In his latest documentary, "The First 54 Years", Israeli director Avi Mograbi demonstrates how catastrophic and traumatising the occupation has been, not only for Palestinians, ... END_OF_DOCUMENT_TOKEN_TO_BE_REPLACED

"The Memory Monster" was a success for Israeli author Yishai Sarid. His latest book hasn't been published in English yet, but given his reach among Anglophone readers, it won't be ... END_OF_DOCUMENT_TOKEN_TO_BE_REPLACED

FIT TLV is the latest initiative by Tel Aviv’s youth to keep on partying during the coronavirus crisis. FIT describe themselves as "Free. Individuals. Together" – cycling, ... END_OF_DOCUMENT_TOKEN_TO_BE_REPLACED

In 2012, fed up with people expressing clear-cut opinions on the rights and wrongs of the Middle East conflict, Canadian conflict researcher and long-time Israeli resident Corey ... END_OF_DOCUMENT_TOKEN_TO_BE_REPLACED

The Islamic Republic of Iran has been subject to sanctions ever since its creation in 1979. The more the regime has entrenched itself and expanded its power in the region, the ... END_OF_DOCUMENT_TOKEN_TO_BE_REPLACED
Author:
Ruth Eglash
Date:
Mail:
Send via mail

END_OF_DOCUMENT_TOKEN_TO_BE_REPLACED
Social media
and networks
Subscribe to our
newsletter