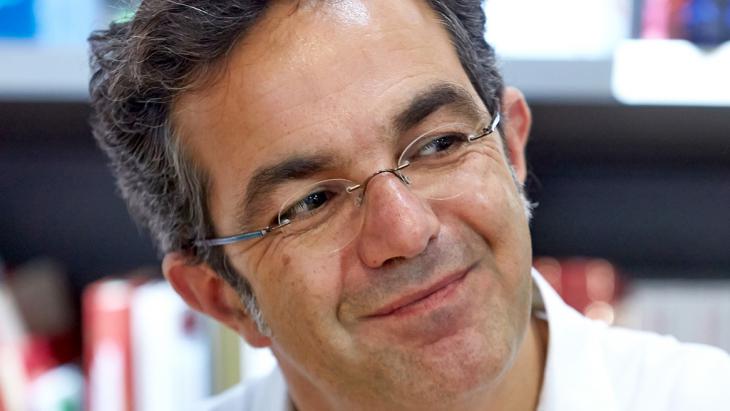 The awe of a loving unbeliever

With his book "Ungläubiges Staunen" (literally "unbelieving awe", as yet unavailable in English), Navid Kermani delivers a fascinating reflection on Christian art and religion. The German-Iranian writer looks at Christianity with a curiosity and an earnestness that has become rare among Christians themselves. Ulrich von Schwerin read the book

He observes Christianity as an outsider – Navid Kermani makes this clear right at the start of his book about Christian art and religion. In the churches of Rome, Cologne and Syria, he became aware of Christianity as a "possibility", but for him, a Muslim, one irreconcilable difference will always remain: he cannot accept the idea of God becoming man, he is repelled by the celebration of Christ’s suffering, the veneration of the Virgin Mary borders for him on the pagan, and the hierarchical structure of the Church is anathema.

Kermani regards Christianity from the distance of someone of a different faith, a fact he takes pains to underscore. And yet he explores the Christian faith with an alert interest and consuming curiosity that is largely lacking among modern believers. Through his keen gaze, coupled with a profound knowledge of theology and art history, he is able to captivate readers with the marvels of artworks that they otherwise might never really notice.

Christianity: the contradictory and the abstruse

In his account, Kermani underscores both the beauty of the Christian religion and its art, as well as their many contradictory and abstruse aspects. There is for example the figure of Jesus as a child in Berlin's Bode Museum, which he describes as not only ugly but as "truly ridiculous; more than just unsightly, it is dumb, with such a miserable naivety that it even has something ungainly and nasty about it, like a mischievous little rascal who can only think of himself". The very thought of a kiss from such a figure is almost unappetizing, writes Kermani, no matter how much one might otherwise like to be kissed by children. 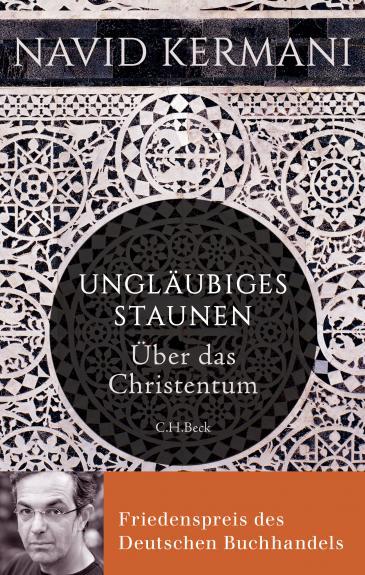 In his book Kermani repeatedly compares Christianity with Islam, particularly with Sufism and his own Shiite faith. Islam, he emphasises, has the greatest respect for Jesus – not as the son of God, but as the embodiment of the divine spirit

When he conjoins this initial, purely aesthetic analysis with passages from the Infancy Gospel of Thomas, in which the young Jesus, as Kermani writes, comes across as a "spoilt brat" who brags about his miraculous powers and causes a neighbour boy who has dared to cross him to "wither into a corpse", Kermani admits that it might almost seem blasphemous. Yet at the same time this approach demonstrates his willingness to take the Christian faith – as revealed in its scriptures and art – utterly seriously.

Kermani engages earnestly with its contradictions, its irrationality and its many miracles – more earnestly, evidently, than many enlightened Christians feel comfortable with, preoccupied as they are in trying to resolve the irrational quality that Christianity shares with all religions. Kermani makes no secret of how little understanding he has for the way Christianity has dispensed with its traditions and hence its entire depth of meaning. Though alienated by the Catholic Church's claim to power, he is nonetheless fascinated by the continuity of an institution that has persisted for thousands of years and still practises its ancient rituals.

Christian and Islamic traditions on the wane

Kermani definitely prefers the Latin mass to the rationalised and mundane services now common in Germany. "Tradition is the passing down of the divine revelation over generations; it is more than any one individual can know or conceive of," Kermani remarked in an interview with "SZ Magazin". Today, however, both Christian and Islamic traditions are being lost. Fundamentalists on both sides claim to be going back to the roots, but in the process they are ignoring centuries of tradition.

Even if tradition cannot be upheld artificially, we should still try to respect and renew it, according to Kermani. He maintains that religion should fit our own ideas and be reconcilable with the demands of the present day. And yet the quintessence of religion is that it is not in step with the times. "Jesus was very obviously not compatible with his own time," Kermani stresses. The challenge is thus to take every word of the 2,000-year-old text of the Bible seriously, and yet live "an enlightened life in the present".

In his book Kermani repeatedly compares Christianity with Islam, particularly with Sufism and his own Shia faith. Islam, he emphasises, has the greatest respect for Jesus – not as the son of God, but as the embodiment of the divine spirit. In the early Christianity of the Aryans, the deification of Jesus was not established doctrine, and thus the faith was still closer to the Islamic view of Jesus. There are still many elements of Christianity in Islam today – and vice versa. 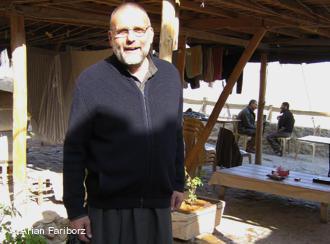 Kidnapped, but still alive: Dall'Oglio was exiled from Syria in 2012 for criticising the regime, but remained in the country, on rebel terrain. According to Human Right Watch in Syria, he was kidnapped in July 2013 in the province of Al-Rakka while on the way to negotiations with the IS

Kermani found parallels, for example, with Islamic prayer practice among Roman nuns belonging to a certain order, and also notes that the Sufis espouse typically Christian forms of charity. The links between Christianity and Islam were most pronounced in the teachings of Paolo Dall'Oglio. The Italian Jesuit priest gathered nuns and monks around him in the 1980s in the abandoned Mar Musa Monastery, in the Syrian desert near Damascus. The community’s devotion to a dialogue with Islam was unprecedented – it was also open to Muslim participation.

"This is about nothing less than the radical incorporation of the Christian faith into a Muslim environment," Kermani quotes Father Paolo as saying. "And by radical I mean something that goes beyond folklore, dress, carpets on the floors of churches, bare feet and the regular use of Muslim expressions." Rather, it was about love for Muslims. In July 2013 Father Paolo travelled to Rakka to plead with the jihadists for the release of two Muslim prisoners. There has been no trace of him since.

Kermani is not only fascinated by Christianity and envious of its art; he also feels a profound affection for the faith. Nevertheless, he remains a devout believer in Islam and deeply rooted in his own religion. "It is a telling point that the author of 'God Is Beautiful' does not draw any conclusions from the beauty of the Christian art he so admires about the truth of the belief in the incarnation of Jesus on which it is predicated," remarks Martin Mosebach, a Catholic writer and the author's friend, with some regret in his interview with Kermani in the "SZ Magazin".

Mosebach acknowledges, though, that Kermani is only able to appraise Christian art with such intensity because he is doing so from outside. Kermani professes that he could never write a book like this about Islam. "You show your love for what is your own – be it your own culture, your religion, or even yourself – through criticism," says Kermani. "You can love something else much more wholeheartedly."

Home
Print
Newsletter
More on this topic
Navid Kermani′s Peace Prize acceptance speech: Freeing Islam from the clutches of the fanatics Abduction in Syria of Paolo Dall'Oglio: A voice of peace in a wilderness of violenceThe Monastery "Deir Mar Musa" in Syria: A haven for spirituality and dialogue
Related Topics
Christianity, Christians in the Islamic world, Church, Dialogue of Religions, History of Islam, Minorities in the Muslim world, Navid Kermani, Shia Islam | Shiite Muslims, Sunni Muslims | Sunni Islam
All Topics

Unauthorised immigration to Europe went down at the peak of the pandemic. As EU countries re-open, migrant flows are back up. What does it mean for the EU – and for migrants? By ... END_OF_DOCUMENT_TOKEN_TO_BE_REPLACED

Religions are often a source of conflict. But the worldwide Religions for Peace movement seeks to change that by galvanising interreligious dialogue. Delegates from 90 countries ... END_OF_DOCUMENT_TOKEN_TO_BE_REPLACED

Berlin's annual Human Rights Film Festival closed at the weekend. One entry to the festival was the documentary "Captains of Zaatari". Its Egyptian director Ali El Arabi focuses ... END_OF_DOCUMENT_TOKEN_TO_BE_REPLACED

The world must take action now to prevent a deep and lasting humanitarian crisis in Afghanistan. But what, if anything, can be done? The one billion dollars pledged by ... END_OF_DOCUMENT_TOKEN_TO_BE_REPLACED

Germany's foreign policy is explicitly values-based. But what happens, Ralf Bosen asks, when democracy, the rule of law and human rights collide with the logic of trade and ... END_OF_DOCUMENT_TOKEN_TO_BE_REPLACED
Author:
Ulrich von Schwerin
Date:
Mail:
Send via mail

END_OF_DOCUMENT_TOKEN_TO_BE_REPLACED
Social media
and networks
Subscribe to our
newsletter