<i>Neda</i>, an Opera by Nader Mashayekhi
Pathos without Kitsch

Nader Mashayekhi is an Iranian-born, Vienna-based composer. With his opera Neda, Mashayekhi has succeeded in creating a notable political work of art that addresses current themes in Iranian society. Stefan Buchen went to see the opera

Nader Mashayekhi is an Iranian-born, Vienna-based composer. With his opera Neda, Mashayekhi has succeeded in creating a notable political work of art that addresses current themes in Iranian society. Stefan Buchen went to see the opera 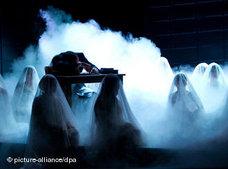 Notable political work of art: the opera composed by the Iranian-born, Vienna-based composer Nader Mashayekhi addresses the issue of equal rights for women or, to be more precise, the desire for equal rights

​​ 20 June 2010 marks the first anniversary of the start of the bloody suppression of the protests against the re-election of Iran's president, Mahmoud Ahmadinejad.

This time last year, eight days after the election, hundreds of thousands of people poured back onto the streets of Tehran and other Iranian cities, flouting the stern warnings of the regime not to do so and in defiance of the revolutionary leader Khamenei's historic address at Friday prayers on the previous day in which he delegitimized the demonstrators' cause and implied that the security forces would adopt a tough stance against them.

And they did. Dozens of demonstrators were killed. One of the victims, the 26-year-old student Neda Agha Soltan, instantly became known around the world when mobile phone images of her death on a street in Tehran were shown on the Internet and by television channels around the world. As a result, she became an icon for the Green Movement.

An opera for the green revolution

Nader Mashayekhi, an Iranian-born composer now living in Vienna, also saw the images and was deeply shocked. They moved him to compose an opera honouring the fight for freedom in Iran in which women are the heroes. The resulting opera is a notable political work of art that addresses current events in Iran. 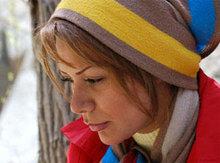 The 26-year-old student Neda Agha Soltan, who was shot dead in Tehran in June 2009, became an icon for the oppositional Green Movement

​​ Another work, a film by the well-known director Jafar Panahi, which sought to highlight the serious domestic political conflict in the country, never even came about because Iran's secret police arrested and jailed the director and a number of his employees while they were filming in Tehran. In this respect, Mashayekhi is lucky to be living safely abroad. The world premier of his opera took place at the Theater Osnabrück this spring.

The opera Neda can be summed up quite simply: with much pathos, it highlights and celebrates women's fight against their oppression at the hands of men, the state, and religion. In this respect, it sends out a clear political and social message that allows very little room for interpretation.

This is supported by the simply structured staging of the opera, which sees "blocks" of men and women standing opposite each other with the figure of the poet Nezami standing in between. However, it would do the opera a great injustice to describe it as simplistic ideology.

The use of literary sources, the way they are linked up to topical political events, and not least the musical composition of Neda are all complex and, therefore, highly interesting. With the exception of Turandot – the tragicomic fairytale for which Friedrich Schiller used Persian material, material that incidentally also features in Neda – European audiences have not seen old Persian myths performed on stage in this manner before.

For this reason, we can say that Mashayekhi, the librettists Nadja Kayali and Angelika Messner, and director Carin Marquardt have written art history with this opera and have struck a new note in the cultural dialogue between East and West.

​​ The libretto is based on the epic poetry of the Persian poet Nezami (1141–1209) and, in particular, on the part of the epic known as Seven Princesses under the Seven Domes of Love. One of the most striking aspects of this poet, to whom expert on Arabic literature Stefan Weidner ascribes "timeless modernity", is that his image of women was not simply rooted in tradition. Nezami saw that women had a certain individuality and were capable of doing things on their own initiative.

The female figures in the opera are taken straight from Nezami's epic. There is Turandot, who barricades herself in a castle so as to be unattainable for men, Nushabe, who seeks to establish a women's state in Neda, Fitna, who embodies the psychological and physical capacity of women not only in Neda but also in the original Persian myth, and the slave Apak, who rises up against the degradation of women as merchandise.

The figure of Nezami also features in the opera, playing the role of a modern man who understands women, one could say the modern equivalent of the convictions that appear in his poetry. In a reference to the Story of the King who Traded in Girls, Nezami is made a present of the slave Apak.

She has a "fault: she doesn't like men. Any man to whom she is given, sends her back the next morning." This is one of the only original quotes in the libretto. Nezami, however, is not deterred by such feminine obstinacy. He offers Apak her freedom and even allows her to go her own way. She is so impressed by this magnanimity that she chooses to remain in his home.

But this love, which she gives "of her own free will", has no chance to thrive in the state and the society that constrains them both. Nezami is exposed to the reproaches of the man's world of religion. They accuse him of being too tolerant, of not consistently exerting his supremacy over women.

Ultimately, Apak is murdered "by men, by laws". In other words, unlike the 12th century original, this story does not have a happy ending in Neda. Instead it ends in death and destruction.

The relationship between the literary source and the opera turns out to be a charming play of different meanings and semantics. The poet Nezami used lyrical formulae to describe women and their beauty in the traditional manner.

Without any ironic distance whatsoever, he speaks of "silver-thighed", "coral-lipped" and "unpierced pearls". In Neda, these quotations reveal the "sick male fantasies" of modern macho men. 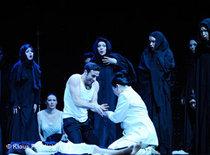 No happy ending: unlike the original twelfth-century epic on which it is based, the opera Neda ends in death and destruction

​​ The women's uprising culminates in the scene in which the women, egged on by Apak, call the people to prayer, a reference that speaks volumes as it recalls the nightly "Allahu akbar" chants of the demonstrators on the roofs of Tehran a year ago, which were intended as a protest against the regime.

With this act, Apak signs her own death warrant; the religious leaders do not accept piety when it comes from the wrong people, in this case from women. The provocative gesture of this scene is reminiscent of the Mohammed caricatures or Theo van Gogh's works, which were critical of Islam. Nader Mashayekhi is a little disappointed that this scene did not cause a huge public outcry.

The composer, who was once chief conductor of the Tehran Symphony Orchestra and was the first person to make twentieth century classical music from the West known in Iran, takes elements of this music genre, which uses western instruments only, and uses them in Neda. He consciously breaks with Persian tradition, in which music plays a subordinate role to the text.

Traditionally, the music is there to serve the poetic text, to accompany and support it. However, it does not exist in its own right. Mashayekhi makes a radical break with this tradition, allowing sound and plot to drift apart, collide and dance with each other.

The singing style in Neda is based on classical opera. Perhaps an opportunity was missed here. Even a gentle nod to the Persian (quarter tone) style of singing would have been a promising and daring move.

As successful as the artistic experiment is, the opera Neda is not a worthy political manifesto. The recurrent motif, "What is missing is love", is very reminiscent of the motto of the flower power generation: "Make love, not war!"

But this motif is hardly likely to move the regime in Tehran. By way of comparison, the play Mosaddegh bi-Baharan (Mosaddegh without Spring) by the director Reza Allamehzadeh, which deals with the CIA-backed coup that swept aside the Iranian prime minister in 1953, or the novel Tehran, Revolution Road by Amir Hasan Cheheltan, which was published in 2009, both present more weighty political theories.

Be that as it may, the way in which the victim Neda is immortalised in this opera is refreshingly different to the exploitation of her memory on some television channels in the past few months.

A young man in a trendy suit and with a faithful, sincere expression of his face by the name of Caspian Makan has appeared, playing the role of Neda's "fiancé", on the German chat show Johannes B. Kerner to talk about the outstanding role she played in the protest movement against Ahmadinejad. He has even met the Israeli president, Shimon Peres, in Jerusalem to bring him "the peaceful greetings of the Iranian people".

The makers of Neda deserve to be praised for not falling prey to such kitsch as this. Hopefully, there will be more performances of this opera.

Iranian Theatre
The Dead Cannot Be Censored
Roberto Ciulli has been organising exchanges between Iranian and German theatre companies for the past ten years. During the most recent visit by a group from Tehran to the "Theater an der Ruhr" in Mülheim the more oblique, indirect criticism was accompanied for the first time by open critical dissent. Peter Phillip reports

Fajr Festival in Teheran
Poised between Censorship and Openness
The US government has declared Iran to be an "outpost of tyranny" and all but threatened it with war – but here the largest theater festival in the Middle East has gotten peacefully underway. Dorothea Marcus reports from Teheran

END_OF_DOCUMENT_TOKEN_TO_BE_REPLACED
Social media
and networks
Subscribe to our
newsletter