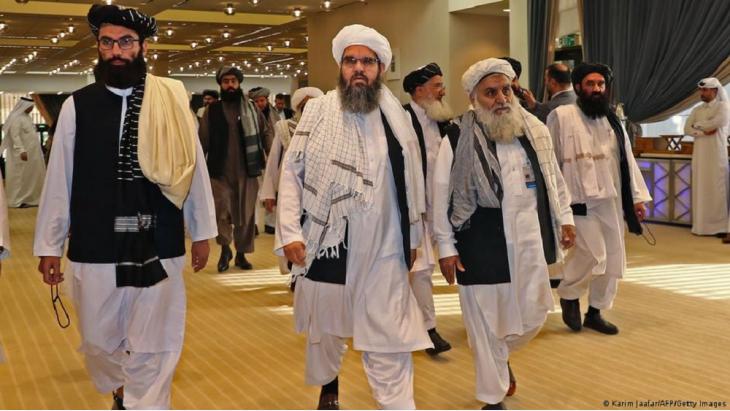 In league with the village mullahs: the Taliban have taken Afghanistan by storm. The rebels' victory is the result of a social revolution in Afghanistan, writes Joseph Croitoru in his analysis

The scenario of a swift Taliban takeover in Afghanistan was predicted with considerable accuracy three months ago in an essay penned by British journalist and political analyst Anatol Lieven: "after the U.S. withdrawal, the collapse of the Afghan state in the Pashtun areas may at some point happen not just very quickly, but also quite peacefully, as Pashtun soldiers and police simply go home, while their commanders flee or make their own deals with the Taliban."

Lieven, correspondent for the Financial Times in Pakistan and Afghanistan at the outset of his career, continues that this was indeed what happened when the communist state collapsed in 1992 and the mujahideen took over. And there was yet another repeat performance when the Taliban swept through the Pashtun areas in 1994–96 and displaced the mujahideen warlords ("An Afghan Tragedy: The Pashtuns, the Taliban and the State" (Survival. Global Politics and Strategy, Vol. 63, Issue 3, May 2021 / Taylor & Francis).

The recent handover of power to the Taliban happened even faster than this because the rebels promised not to go after members of the security forces and civil servants. So far, they have on the whole kept this promise. Lieven sees the Taliban as a genuinely Pashtun movement, which has recently succeeded in gradually extending its sphere of influence beyond the area where the movement first emerged in the south and south-east of the country.

The Pashtuns, who currently make up about 40 percent of the Afghan population, have repeatedly played a dominant role in the political history of the country. It was the Durrani tribal coalitions that set the tone and put powerful dynasties at the top of a variety of state structures ranging from the so-called "Durrani Empire" in the eighteenth and nineteenth centuries to the Kingdom of Afghanistan ruled by Mohammed Zahir Shah, which lasted from 1933 to 1973. Zahir was deposed by his cousin, Mohammed Daoud Khan, who then governed the Republic of Afghanistan, which he himself established, until 1978. 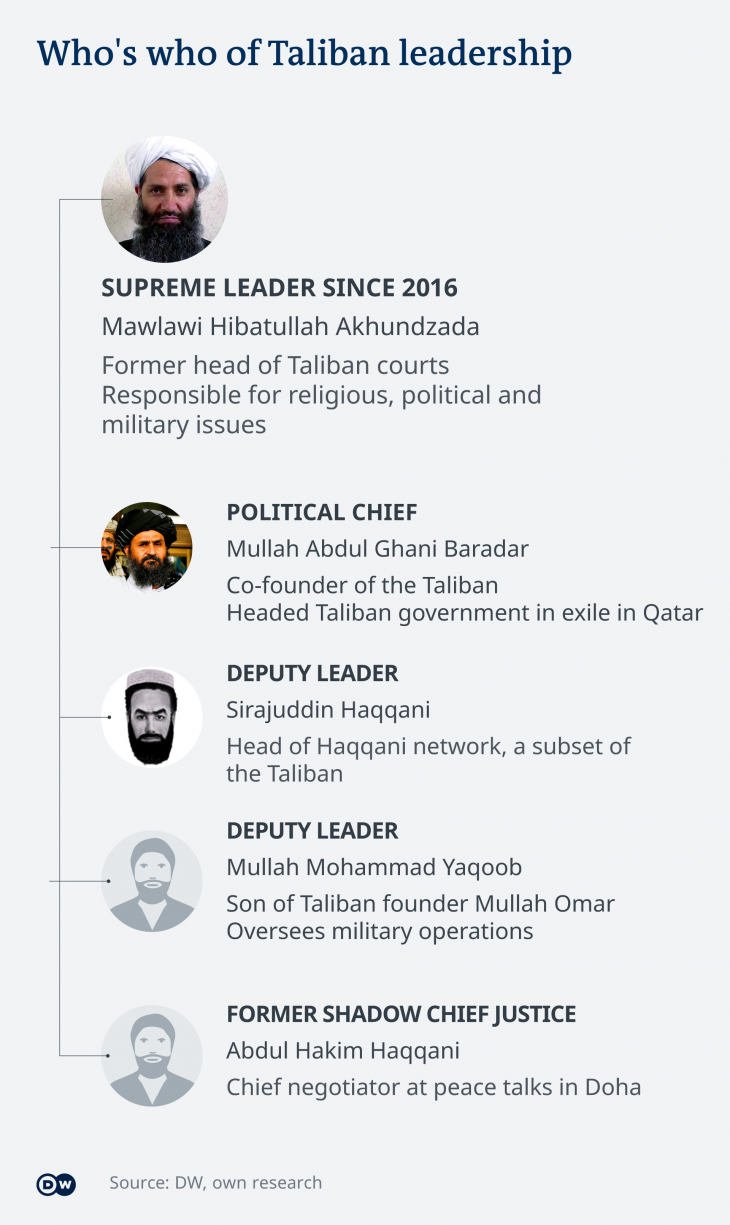 Hierarchical structures: the Taliban are organised according to a strict hierarchy. Mawlawi Haibatullah Achundsada has been the supreme leader since 2016. The religious leader is the highest authority in all political, military and religious matters. He is supported by three delegates and several ministers responsible for the economic, military and intelligence sectors. The highest advisory body is the so-called "Rahbari Shura", also called the "Quetta Shura", with 26 members

While the fabric of Durrani society was predominantly hierarchical, the fabric of Ghilzai society – a considerably poorer Pashtun tribal group based in the south-eastern border region of the country – was built on more egalitarian traditions (Lieven also uses the term "democratic" in this context).

It was from the Ghilzai tribes that the Taliban recruited members in the 1990s. The religious leadership structures of both these tribes also differed. Unlike the religious leaders (sayyids) on which the Durrani kings based the legitimacy of their rule and who themselves had dynastic lines, the religious authorities of the Ghilzai came from simple, often impoverished backgrounds. Nor did they did not claim to have any of that specifically saintly aura the sayyids cultivated although they did compete with each other, sometimes in open rivalry.

Group discipline was much more prevalent among the Ghilzai, which was an advantage in periods of jihad when in conflict with foreign invaders – as was the case most recently with the Western alliance. In Lieven's view, the increased status of these village mullahs – who had not previously been held in high esteem – was nothing less than a revolution in the history of the Pashtun tribes. Above all, it was their cooperation with the Taliban that contributed to their elevated status. With the help of these village mullahs, the Taliban are now able to exert their influence in even the remotest parts of the country, something no other force in the history of Afghanistan has ever succeeded in doing.

Lieven puts the continuous growth of the Taliban's power since the American invasion in 2001 down to their ability to link two widespread master narratives: the tribal Pashtun and the Islamic. With the establishment of their albeit short-lived Islamic Emirate of Afghanistan (1996–2001), the Taliban were able to project an image of continuity, renewing the centuries-old tradition of Pashtun rule that had previously been interrupted. After 2001, they also succeeded in burnishing their image as a leading force in the defensive jihad against the Western invaders.

Naturally, this mission was widely accepted by secular Pashtuns too, which is not surprising when one considers that the determination to never submit to a foreign power – especially against the backdrop of the extended period of colonial interventions in Afghanistan – is a key part of the self-image of these tribes. However, the Taliban are successful not just as leaders in times of conflict, during which they succeeded over and over again in recovering from massive losses – another unprecedented achievement in the history of Afghan tribal insurgencies. They also use their position of power cleverly to act as mediators in local disputes – a role that had previously been filled by the leaders of tribal coalitions or kings. The most recent government in Kabul, which was weak, divided and seen as corrupt, was not able to assume this role.

They call themselves "pupils and students": this is the literal translation of the word "Taliban". The term is the Pashtun plural form of the word "talib", which derives from Arabic. Many Taliban are said to have attended religious schools in Afghanistan and Pakistan in the 1990s, where an extremist interpretation of Sunni Islam was preached

The Taliban are more than merely religiously motivated, fanatical insurgents

In view of all this, Lieven considers it wrong to view the Taliban as nothing more than religiously motivated, fanatical insurgents. To back up his argument, Lieven points to the fact that during the previous period of Taliban rule – and after it as well – the Taliban threw its full weight behind the World Health Organization's polio vaccination programme. From speaking to Taliban leaders, Lieven also learned that the Taliban does not under any circumstances want to repeat its earlier mistake of supporting al-Qaida. Indeed, he says, the fight against IS terror militias that are active in the country is seen as a prerequisite for securing the foreign financial assistance that every Afghan government needs in order to function after the assumption of power in Kabul – an event that has since come to pass.

In order to stabilise their rule, Lieven explains, the Taliban would not only have to reach agreements with the other major ethnic groups in the country (the Tajiks, the Hazaras and the Uzbeks), they would also have to make compromises in terms of their religious agenda, whereby it can be assumed that the Taliban will continue to stipulate a conservative Islamic attitude, for which they are likely to get support from other ethnic groups.

Anchita Borthakur and Angana Kotokey reached a similar conclusion. In their essay "The Ideological Trajectory within the Taliban Movement in Afghanistan" (Asian Journal of Middle Eastern and Islamic Studies, Vol. 15, Issue 2, May 2021 / Taylor & Francis), they say that they have discerned an ideological change among the Taliban.

Now, say the two Indian political scientists, the Taliban movement is striving for power in Kabul under very different circumstances. Borthakur and Kotokey say that the Taliban leadership has undergone renewal. And so, the "neo-Taliban" has emerged out of the old movement. This Neo-Taliban can roughly be divided into two factions. The more liberal wing is casting itself in the role of peace advocate and, consequently, as an alternative to the US-based government in Kabul. Borthakur and Kotokey also say that this wing is inspired by Islamist movements in the Arab world and seems to be striving for a synthesis of Islam and modernism. They see signs of this in the fact that this wing has opened up to the world of digital media and that it has stated that bans are counterproductive and would only cut off the Taliban from what is going on in the world. They also point out that the more liberal camp is also creating the impression that it is much more open to other ethnic groups in the country, which resulted in the appointment of a Hazara Shia to the post of shadow governor in the northern province of Sar-e Pol in April 2020.

The events of recent days would seem to confirm these signs. The Taliban leadership has itself stated that it wants to form an inclusive government. It has already started talks with other groups. It also reaffirmed the declaration it made in April 2020 that it is interested in peaceful co-operation with all Afghanistan's neighbouring countries.

There are other indicators that seem to confirm the impression that Anatol Lieven got from discussions with Taliban cadres about the way the movement intends to deal with radical Islamic terrorist organisations that are operating in the country: Taliban spokespersons are now stressing that the Taliban will not under any circumstances tolerate Afghanistan being used as a base from which to pose a threat to other countries.

Speaking at the organisation's first press conference, the then Taliban spokesman Zabihullah Mudjahed admitted that the Taliban had undergone a process of internal development. A short time later, he was appointed minister of culture and information.

Afghanistan expert Ahmed Rashid: "The Americans were completely devoid of any strategy"

Home
Print
Newsletter
More on this topic
Western withdrawal from Afghanistan: The symbolic importance of the U.S. defeatAfghanistan and its neighbours: Is the Taliban takeover still in Pakistan's interest?Afghanistan and Iran: Can Iran be friends with the Taliban?Qantara photo essay: Call to preserve Afghan cultural heritage and protect workers
Related Topics
9/11, Al-Qaida, Ashraf Ghani, Democracy and civil society, Hamid Karsai, International terrorism, Islam and democracy, Radicalisation, Science, Taliban, U.S. policy in the Middle East
All Topics

Education for girls and women is still possible in Afghanistan, says Reinhard Eroes of the Kinderhilfe Afghanistan initiative. In interview with Elisa Rheinheimer, he talks about ... END_OF_DOCUMENT_TOKEN_TO_BE_REPLACED

A lawmaker in Pakistan's rugged northwest was sipping tea with voters when his phone chirped to life – the Taliban were calling with a demand for 'donations'. "We hope you won't ... END_OF_DOCUMENT_TOKEN_TO_BE_REPLACED

Cries of "Benghazi!" still resonate across the USA ten years after a deadly terrorist attack in Libya killed the U.S. ambassador and three other Americans. Ethan Chorin re-tells ... END_OF_DOCUMENT_TOKEN_TO_BE_REPLACED

Sufism has fluid boundaries. Just like Islam, Sufism is inconceivable without its late antique roots. Then again, it has also exerted an influence on Hinduism. Moreover, the Sufic ... END_OF_DOCUMENT_TOKEN_TO_BE_REPLACED

Journalist Waslat Hasrat-Nazimi was forced to flee Afghanistan with her family as a child and grew up in Germany. To mark the publication of her book "The Lionesses of Afghanistan ... END_OF_DOCUMENT_TOKEN_TO_BE_REPLACED

Just as the Islamic Revolution fundamentally changed Iran 43 years ago and had an impact far beyond the country's borders, the current wave of protests sweeping the country is set ... END_OF_DOCUMENT_TOKEN_TO_BE_REPLACED
Author:
Joseph Croitoru
Date:
Mail:
Send via mail

END_OF_DOCUMENT_TOKEN_TO_BE_REPLACED
Social media
and networks
Subscribe to our
newsletter