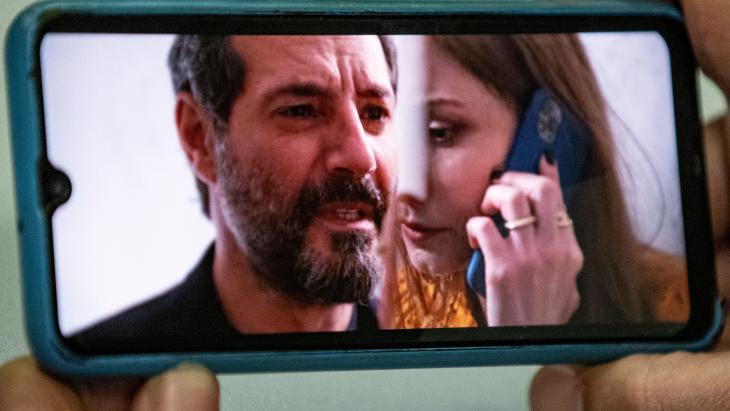 Netflix's first Arabic film production was always set to be a big event, but within days of its release, public opinion in Egypt was so inflamed that critics called for a ban on the platform.

The movie is about a group of friends meeting for dinner and deciding to make the night more interesting by agreeing to share every text message, email and phone call received with the rest of the group. As events unfold, the game reveals shocking truths about members of the group as it touches on topics from adultery and premarital sex to homosexuality, all widely considered taboos in Egypt.

The film, which was released on 20 January, immediately shot up to the most-watched list in Egypt. But in the ensuing fracas, lawsuits have been filed against the culture ministry and the censor's office for allowing the film to be streamed, and MPs have called for a special session to discuss whether to ban Netflix altogether.

Online, many slammed celebrated Egyptian actress Mona Zaki, who took part in what they dubbed a "disgraceful" movie.

Amid the storm, the U.S. streaming giant has refrained from commenting.

One lawyer argued that the film "promotes homosexuality" while another said it seeks to "destroy family values" as part of a "systematic war on the morals" of Egyptian society.

While homosexuality is not expressly outlawed in Egypt, it is often punished under loosely worded laws prohibiting "debauchery". Moreover, discrimination against the LGBT community is widespread in the deeply conservative and religious society.

Lawmaker Mostafa Bakry argued Netflix should be banned altogether as he called for an urgent meeting in parliament to discuss it. He particularly lambasted a scene in which one of the actors – who was playing a father to a teenage girl – discussed with his daughter her first sexual encounter.

Premarital sex is also taboo in Egypt, where in extreme cases it may provoke "honour killings", especially in rural areas.

"This network targets Egyptian and Arab citizens ... we should ban Netflix," Bakri said in an interview with a private TV channel. He said the film includes "more than 20 suggestive profanities which shocked Egyptian families".

Netflix rated the one-and-a-half hour long feature as not suitable for those under 16 years old, though it did not include any nudity or sex scenes.

Egyptian film critic Tarek Shennawy said he was "surprised" at the attack on actress Mona Zaki. Zaki, who played the part of a wife trapped in an unsatisfying marriage, was particularly criticised for a scene in which she removes her underwear from under her dress.

On social media, many viewed the scene as a source of shame for her husband – renowned actor Ahmed Helmi – and their daughter.

"How did Ahmed Helmi allow his wife to play this part in the movie," one user asked on Twitter.

Another questioned how Zaki "was not afraid for her daughter to see her this bold".

But Shennawy argued that "the movie's content should not affect the personal or national honour of those who took part in it".

"We are confusing fiction with reality and this is very weird."

Egyptian cinema has a long history of films that shake social mores.

Nearly 20 years ago, "Sahar al-Layali" (Sleepless Nights), broached the troubles facing young married and unmarried couples. It too raised topics such as adultery, classism and sexual dissatisfaction in marriages.

In 2006, cinemas screened "The Yacoubian Building" – adapted from the best-selling novel by Alaa al-Aswany – which explicitly discussed homosexuality.

Perhaps the greatest irony is the fact that in 2016, the Cairo International Film Festival's top prize went to none other than "Perfetti Sconosciutti".

But public appetite for such films has clashed with a mounting backlash as Egypt has become more conservative and freedoms have been further curtailed under President Abdel Fattah al-Sisi, who took office in 2014.

Yet despite the scathing criticism, others defended the film, viewing it as an accurate depiction of reality.

"It is bold, unconventional and broached topics that Arabic cinema did not discuss before," prominent leftist lawyer and former presidential candidate Khaled Ali wrote on Facebook. "It is realistic, no matter how much we try to deny, silence or ignore it."    (AFP)

END_OF_DOCUMENT_TOKEN_TO_BE_REPLACED
Social media
and networks
Subscribe to our
newsletter