From Meditative to Tempestuous

Contemporary oud players are trying out completely new approaches to their instrument. While still relying on its tranquil tone, they do not hesitate to play with loud electronic amplification. Kersten Knipp offers an overview. 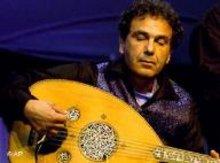 ​​Musicians work with sounds – true enough. But that is not all. Sometimes they also make good use of silence, especially when playing a quiet instrument with a restrained sound.

The oud is one such instrument: the Arabic short-necked lute sounds especially suggestive when producing soft sounds audible almost as whispers. Three musicians with an exquisite mastery of this interplay between dynamism and restraint are the brothers Samir, Wissam and Adnan Joubran.

The trio's latest CD is called "Majâz"; all playing the oud, the musicians emphasize face-paced finger-work, speed and breakneck runs of notes. But soft tones and lines emerge as well, their rhythm gradually gaining momentum, but leaving time for restrained dialogues, the execution and development of a theme that one player passes to the next for further elaboration. Their playing still evokes the Orient, but it emerges quite abstractly, in minimal nuances.

The oud and Fado

​​The oud virtuoso Rabih Abou-Khalil also takes a fundamentally sedate approach. On his most recent CD he collaborates with the Fado singer Ricardo Ribeiro. A melancholy instrument and a melancholy singing tradition – that is a lot of melancholy at once.

So Abou-Khalil and Ricardo Ribeiro shake it up a bit: Ribeiro avoids Fado's overly somber sides, and Abou-Khalil keeps after him with his instrument, accompanying him with energetic, often rough-edged playing.

This departure from the original material is entirely in keeping with Abou-Khalil's artistic stance: when asked about his instrument, he explains that first and foremost he is not an ambassador of his country, Lebanon, but a musician.

Not for nothing does he emphasize the fact: to an extent matched by few other instruments, the oud is associated with a specific cultural sphere, namely the Arab world.

No, he declares, under no circumstances does he want to be pinned down to the Orient as his frame of reference; as a jazz musician, he is always searching for new modes of expression.

Not all oud players have made as consistent a point of breaking with the Orient as Rabih Abou-Khalil. His countryman Marcel Khalifé, for instance, has made very uninhibited use of the Arab world's musical traditions, resulting in often quite dubious musical variations on what the Palestinian-American literary scholar Edward Said referred to years ago as "Orientalism": the exploitation of all the clichés associated with the Arab world. Now, however, Khalifé has presented a CD entitled "Taqasim" in which he cultivates a completely new style.

​​Here he uses his instrument to interpret works by the Palestinian poet Mahmoud Darwisch, transcending the poet's often dark tone and eschewing all regional references.

Khalifé is accompanied by Peter Herbert bass and his son Bachar on various percussion instruments. The result is a wonderfully light, elegant CD filled with lovely but never saccharine melodies.

The musical lines are light and airy, seeming to rise effortlessly from the oud, dispelled only occasionally by the powerful voice of the bass. This CD is compellingly modern, a work that does not have a pure jazz orientation, but one that cannot be exclusively categorized under Arabic music either.

The charm of the electronic

A striking mix of styles is also cultivated by the Tunisian oud player Dhafer Youssef, who regularly performs with the Vietnamese-French jazz guitarist Nguyên Lê and other giants of the field such as percussionist Mino Cinelu, trumpeter Markus Stockhausen and bassist Renaud Garcia-Fons.

The drums and bass set an energetic rhythm, and Youssef unfolds his performance, usually electronically amplified, atop a synthesizer layer.

​​Drawing on all the possibilities of modern electronics from echoes to sound distortion, Youssef's performance style moves toward jazz rhythms, an aesthetic that draws its charm from all the experiments rock musicians have undertaken over the past decades.

Recently the Algerian-French musician Mehdi Haddab has repeatedly proved that the oud can be played harder, much harder. As he explains it, he often shared the stage with western musicians and was repeatedly confronted with the problem that his own instrument could not be heard.

So he constructed an electric oud with electric pickups and its own amplifier. Now his oud is no longer overheard, and Haddab exploits the new possibilities to the utmost.

His playing style is entirely oriented toward modern rock, hard rock, in fact. The kind of riffs and one-note playing otherwise encountered in guitarists from hard rock bands, breakneck runs of notes, a distorted sound, plus drums, often electronic as well, and a bass tending toward the lower registers: the result is a genre of its own that is also nearly impossible to categorize.

Modern oud players rarely flirt with silence these days, but they play their instrument just as beguilingly. And in its most beautiful moments, the oud’s exquisitely tranquil, singing tone still captivates.

Portrait Dhafer Youssef
From Koran School to the First League in European Jazz
Since the release of Electric Sufi in 2002, Dhafer Youssef has been regarded as one of the most innovative and versatile jazz and world musicians. His singing goes back to Islamic traditions, but he has turned his back on his native Tunisia. Ralf Dombrowski reports

END_OF_DOCUMENT_TOKEN_TO_BE_REPLACED
Social media
and networks
Subscribe to our
newsletter