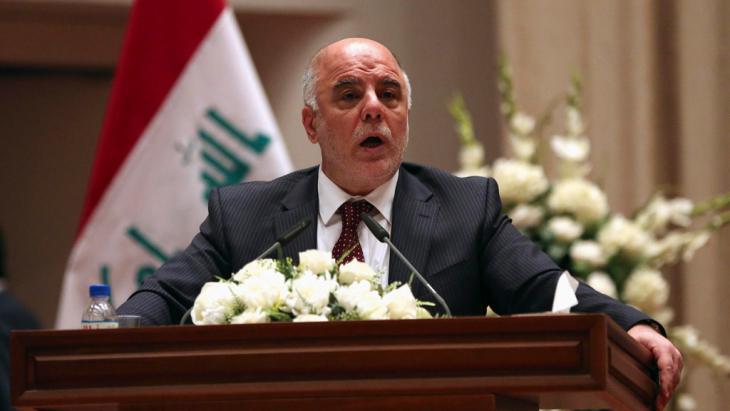 Iraq's new prime minister, Haider al-Abadi, along with some members of his cabinet were recently confirmed in their posts with the help of votes from Kurdish members of parliament. But the haggling in Iraq's post-Saddam political bazaar is far from over. By Birgit Svensson in Baghdad

No one can really get excited about the new government in Baghdad. Defence and interior ministers have not yet been appointed, and with the exception of the Kurdish president, the Kurds are represented only by their former long-time foreign minister Hoshiar Zebari, who has now been appointed deputy prime minister. At times, things got so bad that the Kurdish MPs threatened to leave the parliamentary session.

The other political parties are also at loggerheads with each other. The Shia Badr Party was unable to shoehorn its candidate into the post of interior minister. The powerful former Minister for Oil, Hussein al-Shahristani, refused the offer of the Ministry for Higher Education.

The haggling in Iraq's post-Saddam political bazaar is, therefore, far from over. Nevertheless, 177 MPs (166 were needed) voted for the half-finished cabinet list of Prime Minister-designate Haider al-Abadi. The MPs' approval is viewed as more of a vote for the new prime minister than for his government. In any case, it is certainly a clear rejection of Nouri al-Maliki, who tried his best to get a third term but eventually had to give up.

Enemies around the president's table

Now Maliki sits with his archenemies Ayad Allawi and Osama Nujaifi at the table of President Fuad Masum. While Allawi was sidelined by Maliki after the last election in 2010, Nujaifi, as speaker of the Council of Representatives, became the country's most influential Sunni politician and tried to undermine Maliki. He reaped insults and slander as a result. A parliamentary vote of no confidence in Nujaifi initiated by Maliki failed by a narrow margin.

Now Masum must try to motivate his three deputies to take concerted action against the terrorism perpetrated by the 'Islamic State' (IS) and to mobilise their followers not against each other, as in the past, but in co-operation with one another for a common cause. Only then will the USA agree to renew its engagement in Iraq. And that is in turn the only way to defeat the caliphate that the terrorist group has proclaimed across large swathes of northern Iraq. 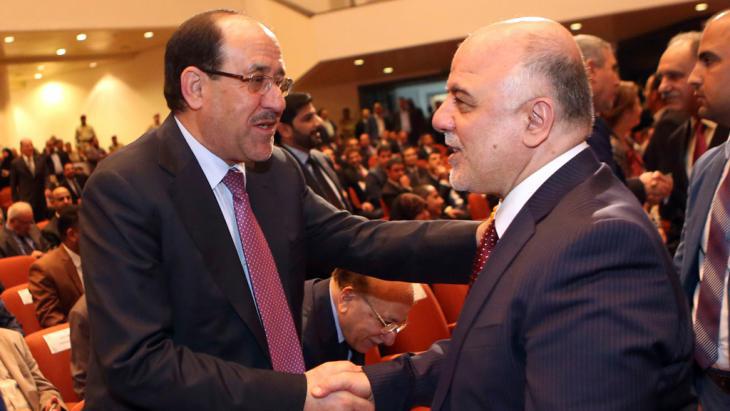 Out with the old, in with the new: former Iraqi Prime Minister Nouri al-Maliki (left) congratulates his successor, Haider al-Abadi. "The challenges facing the new prime minister are colossal. Abadi has to make amends for all of Maliki's mistakes. He must repair the relationship with the Sunnis and come up with a compromise for the Kurds. And he has only three months to do so," writes Birgit Svensson

Many fear that the longer the jihadist state endures, the more difficult it will be to dismantle it. Three months have already passed since the holy warriors' lightning-quick invasion and their taking of Mosul and Tikrit. Despite occasional setbacks, the terrorist militia has steadily gained ground.

The challenges facing the new prime minister are colossal. Abadi has to make amends for all of Maliki's mistakes. He must repair the relationship with the Sunnis and come up with a compromise for the Kurds. And he has only three months to do so. The Kurds have vowed to delay taking any action for that period in order to give him a chance to find a consensual solution.

The issue at hand is oil and its exportation and how to distribute the revenues. It is also about Kirkuk and administrative jurisdiction over the wealthy oil city. And it involves more autonomy in decisions affecting the Kurdish provinces in the north-eastern part of the country. The Kurds are pushing for adherence to the principle of a federal state, which was set out in the Iraqi Constitution but never put into practice.

Ex-Prime Minister Maliki insisted on the primacy of the unitary state, brusquely rejecting any aspiration to autonomy shown by the provinces. When the first peaceful demonstrations against him and the central government in Baghdad took place in the Sunni province of Anbar two years ago, and people in Mossul began calling for greater autonomy for Nineveh, Maliki swept the petitions by the respective governors aside, unwilling to brook any compromises. Instead, he demanded obedience to Baghdad. He held the view that only the capital should determine the country's future.

Maliki seen as a "new Saddam"

This is why many Iraqis came to see Maliki as a new Saddam, a new dictator. It is also one reason why so many initially cheered on the IS terrorists when they took Mosul, Tikrit and other cities, freeing their inhabitants from "Baghdad's yoke". 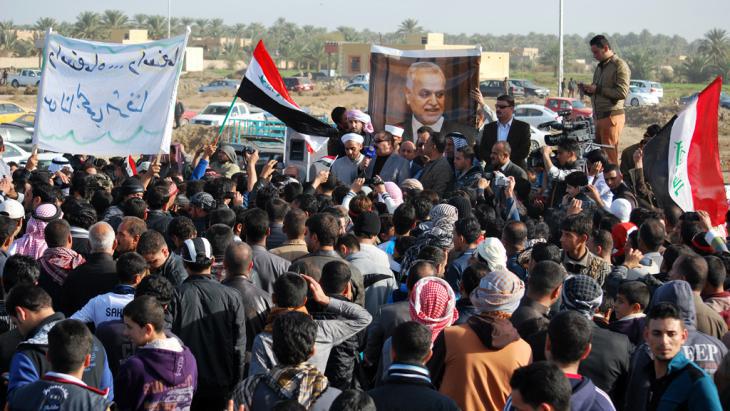 Sunnis across Iraq held a deep mistrust of the former prime minister, Nouri al-Maliki, and his government and were opposed to the Shia domination of politics, administration, and army. Pictured here: Sunnis from Ramadi demonstrating against Nouri al-Maliki on 23 December 2012

The fact that Abadi, a Shia Muslim, certainly intends to seek a rapprochement with Sunnis and Kurds is demonstrated by documents recently published on the Iraqi Internet portal "IraqiNews". A 20-point paper was used as the basis for the approval of his new government. It states therein that the central government in Baghdad will from now on strive for extensive co-operation with armed tribal leaders in the Sunni provinces. More independence will be granted to the provinces by allowing them to decide for themselves what special forces are needed for their security.

The devastating confrontation between Shias and Sunnis that last broke out under Prime Minister Maliki culminated in the allegation that the Iraqi army is unilaterally Shia and discriminates against Sunnis. The new prime minister now wants to put the key for security in Sunni regions into the hands of the Sunnis themselves. He has also promised that areas destroyed by the IS in battles with the Iraqi army should be rebuilt as soon as possible.

In the dispute over oil and its lawful sale, a solution is to be found with the Kurds as quickly as possible. This will be the job of Adel Abdul Mahdi, a quiet, cautious Shia politician who once studied and lived in France and has for years been shaping policy in Baghdad side by side with the Kurds.

In contrast to his gruff and intransigent predecessor, Shahristani, the new Minister for Oil intends to do everything he can to keep the Kurds in the Iraqi federation. The voices in the Kurdish territories of Erbil, Dohuk and Sulaimaniya calling for an independent Kurdish state may have become quieter since Peshmerga defeats by IS, but they have not fallen silent.

Home
Print
Newsletter
More on this topic
Nouri al-Maliki and the Iraqi crisis: Not the right guy for IraqIran's role in the Iraq conflict : An ally, but not a puppetThe Iraq crisis and the West: The ugly new order in the "Fertile Crescent"
Related Topics
'Islamic State' | IS, Fuad Masum, Haider al-Abadi, Kurds, Masoud Barzani, Nouri al-Maliki, Saddam Hussein, Sunni-Shia tension
All Topics

In his book "Ground Zero: 9/11 und die Geburt der Gegenwart" (Ground Zero: 9/11 and the Birth of the Present) Islamic scholar Stefan Weidner analyses the consequences of the ... END_OF_DOCUMENT_TOKEN_TO_BE_REPLACED

The rollout of coronavirus vaccines in the Middle East and North Africa is already taking place on a massive scale, with the United Arab Emirates leading the way. Nevertheless, ... END_OF_DOCUMENT_TOKEN_TO_BE_REPLACED

German Middle East analyst Guido Steinberg and television journalist Ulrich Tilgner have both published new books on the conflicts in the Middle East. Their analyses and their ... END_OF_DOCUMENT_TOKEN_TO_BE_REPLACED

The Pope’s journey to the "land between the rivers": places of terror and a dialogue to promote hope and optimism. His meeting with Shia Grand Ayatollah Ali al-Sistani was a ... END_OF_DOCUMENT_TOKEN_TO_BE_REPLACED

When Pope Francis sets foot in Iraq, he will be breaking historic ground while manoeuvring religious and political minefields. So will his foremost religious counterpart, Grand ... END_OF_DOCUMENT_TOKEN_TO_BE_REPLACED
Author:
Birgit Svensson
Date:
Mail:
Send via mail

END_OF_DOCUMENT_TOKEN_TO_BE_REPLACED
Social media
and networks
Subscribe to our
newsletter