Fighting Extremism in A Suit and Tie

The new grand sheikh of al-Azhar University, Ahmed al-Tayyib, is considered open-minded and moderate. He rejects all forms of political Islam and would like to continue to lead the most renowned and respected seat of Sunni learning in the progressive tradition established by his predecessor. Alfred Hackensberger reports 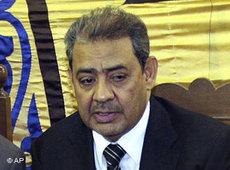 For tolerance and against extremism: the 64-year-old Islamic scholar Ahmed al-Tayyib, up until recently rector of al-Azhar University, succeeds Sheikh Mohammed Said Tantawi, who died on a trip to Saudi Arabia on 10 March

​​ Egypt's president, Hosni Mubarak, didn't have to let the grass grow under his feet. Less than two weeks after the death of Mohammed Sayed Tantawi, Mubarak appointed Tantawi's successor to the most senior post at the one thousand-year-old al-Azhar University, the oldest and most revered seat of learning for Sunni Islam.

Ahmed al-Tayyib, the former grand mufti of Egypt, assumes the post with the highest authority in the country, one which sets the tone for Sunnis the world over (approximately 90 per cent of the world's 1.5 billion Muslims are Sunnis).

64-year-old al-Tayyib, who has a doctorate from the Sorbonne in Paris, will in future be responsible for a university system with 300,000 students as well as primary schools and secondary schools with 1.5 million pupils. Al-Azhar also decides on behalf of the Egyptian government which films and books are not in line with Islamic values and must consequently be either banned or subject to censorship.

Al-Tayyib, who has a penchant for western suits and ties, is considered open-minded and moderate. He rejects all forms of extremism, against which he has crusaded in the past by issuing a number of fatwas. For President Mubarak, this was a decisive factor in favour of al-Tayyib's appointment.

That being said, it is also likely that the grand sheikh's membership of Mubarak's ruling National Democratic Party made him all the more "trustworthy" and tipped the balance in his favour. After all, the new grand sheikh is a member of the party's policy-making committee.

Doubts about the grand sheikh's independence

There have already been calls for al-Tayyib to resign from all secondary positions of this kind. Gamal Qutb, the former chairman of al-Azhar University's fatwa commission, described the situation as "a contradiction". "The state is very, very interested in having a completely independent, academic institution whose opinion is respected by everyone, even if this opinion happens to be the same as that of the state."

Ahmed al-Tayyib, on the other hand, has rejected the suggestion that he was only appointed because of his membership of the ruling party and added that he would have no problem meeting the requirements of his new post. He also said that he would "be neutral and all decisions will be made with the good of al-Azhar, Egypt, and Islam in mind." 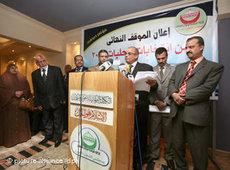 Rule by inclusion: Ahmed al-Tayyib welcomes the participation and inclusion of the Muslim Brothers in Egyptian politics as long as they abide by the rules of the system

​​ Correspondingly, the sheikh, who was born in Luxor, refused to resign from his posts in the party, a situation that is likely to be grist to the mill of political opponents who are calling for more democracy in Egypt.

These opponents include the Muslim Brothers, the largest and best organized opposition group in Egypt. In 2006, al-Tayyib, who was dean of al-Azhar University at the time, had one of their campus demonstrations disbanded.

"Like all other national parties or Islamic groups," wrote al-Tayyib, "the Muslim Brothers can participate in the activities of the country as long as they remain within the boundaries of the law."

This is unlikely to earn Egypt's most senior religious dignitary brownie points from critics of the "Mubarak system". The Muslim Brothers and other opponents of the regime also considered his predecessor to be a government stooge.

A brand of Islam that suits the government

Mohammed Sayed Tantawi, who died of a heart attack on 10 March at the age of 81 during a visit to Saudi Arabia, was a proponent of a moderate brand of Islam that toed the government line. Naturally, this version of Islam did have a few rough edges so that no-one could accuse him of blatant opportunism.

Tantawi was willing to negotiate with Israel, demonstratively shook Shimon Peres' hand, and provided the religious justification for the border fence erected between Egypt and the Gaza Strip in order to prevent smuggling. The former grand sheikh allowed the banks to pay out interest and France to ban the headscarf. He also rejected female genital mutilation and called for women to be appointed to senior government posts.

Particularly insulting for the fundamentalists was his ban on the niqab, the full face veil, from the schools of al-Azhar. Tantawi had justified the ban on the basis that the niqab is un-Islamic. A court later overturned his ban on the grounds that it would curtail the constitutional rights of women. 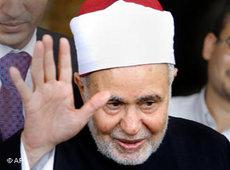 In theological terms, Tantawi was considered a liberal; he considered the niqab to be non-obligatory for women and spoke out in favour of a ban of the full face veil on the university campus

​​ "Tantawi preserved the moderate character of al-Azhar against all extreme currents," says Salah Eissa of the weekly newspaper al-Qahira. His period in office (1996–2010) coincided with turbulent and politically challenging times outside the university. There were the attacks of September 11 and the subsequent invasion of Afghanistan and Iraq, the second intifada in Palestine, the Lebanon War of 2006, and the conflict in the Gaza Strip in the winter of 2008.

A bastion of tolerance and moderation

The new head of al-Azhar will not have an easy job really asserting himself over the chorus of sometimes very radical voices. In this regard, Ahmed al-Tayyib has already attempted to send out initial signals and to bring himself into position. Immediately after taking office, the new grand sheikh declared that "al-Azhar would be a bastion of tolerance and moderation against extremism and fanaticism."

He went on to say that the intention was to use the latest technology to spread a moderate Islam throughout the world. He wants clerics at al-Azhar to learn new methods of preaching so that they can, above all, reach young people, who generally expect swifter reactions instead of lengthy, traditional approaches. He doesn't want to try and ban the niqab again, despite the fact that it is only a tradition and that women are not obliged to wear it.

He also announced plans for special measures to combat television preachers, who have been popular for a number of years now, attracting Muslim audiences with their radical sermons. "We have to counter these preachers, whose ideas are very extremist in their outlook," said al-Tayyib in an Egyptian talk show. "They should be banned from the media because they only want to cause a sensation and nothing else."

He wants to address seriously the issue of preachers of this kind "who only shout at us from the television" and develop new and better programmes that will attract young people.

In order to do so, a situation similar to that in Iran would have to be established – a country where satellite dishes are banned and the Islamic religious police chase law-breakers over the rooftops. This could hardly be described as an example of tolerance, a tradition the one thousand-year-old university would like to continue in the future.

The Muslim Brotherhood
Struggling to Steer a Democratic Course
The Muslim Brotherhood is the largest political opposition organization in many Arab states, particularly Egypt. Now splits within the world's oldest and largest Islamic political group indicate that it is at a decisive crossroads. By James M. Dorsey

Religious vs. Secular Authorities
The Egyptian Sickness
Religious fanatics have long been waging a campaign in the courts and the media intended to silence critical intellectuals. The prominent political scientist Amr Hamzawy calls for a public debate on the issue of the status of Sharia in the Egyptian constitution